If Karin Wedemeyer had her way, everyone would have the opportunity to experience the opera. As the director of the Music Conservatory of Sandpoint — and a classically trained operatic singer herself — Wedemeyer founded the Bel Canto Opera in 2016 with an unusual mission: to bring the art form back into the eyes of the fine arts beholder and the next generation that might think opera is stuffy. 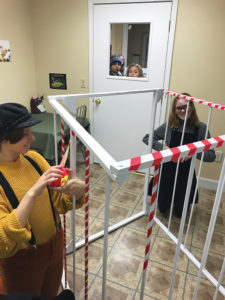 Lucinda Meshburg and Abbie Baker work on props for the production of Hansel & Gretel, with Rowan and Rosie Greenland looking on from the window. Photo courtesy MCS.

The production involves principle singers with Bel Canto Choir, as well as guest singers and nonprofessional children singers. According to Wedemeyer, opera can be the most fun when you break its rules.

“It’s exciting for them because it’s a different kind of responsibility — a work-intensive project,” Wedemeyer said. “We create new storylines and mix things up a bit. They have been doing very, very well, and that gives our students the opportunity to grow their skills.”

The children’s opera, written by Engelbert Humperdink, is based on a dark German fairy tale first recorded by the Brothers Grimm in 1812. The original version is quite a bit more macabre than the sanitized story modern children have grown up with.

In the Brothers Grimm version, Hansel and Gretel are the children of a poor woodcutter in the time of widespread famine. When food grows short, the woodcutter’s wife (stepmother to the children) suggests they lead the children deep into the woods and leave them there to fend for themselves. Hansel hears of the plan and gathers pebbles to lead the way back home, which works the first time they are abandoned. But the stepmother has her way and they abandon the children again, not giving them access to pebbles. Instead, the children leave a trail of breadcrumbs to find their way home, but after birds eat the crumbs, they are hopelessly lost in the forest, where they encounter a witch living in a gingerbread house who lures them inside with the intention of eating them.

“The Brothers Grimm collected stories that always had their roots in truth,” Wedemeyer said. “There actually was a time in history where exactly what is described in the opera actually happened. The accounts of poverty were so severe, there were indeed people in the woods that actually ate children.”

The Bel Canto Opera’s storyline of Hansel & Gretel is a mild deviation from the gruesome original tale in order to remain accessible and enjoyable by a range of age groups. After the performance, audience members are invited to stick around to build their own gingerbread houses with MCS staff and singers.

Wedemeyer said the student performers are taught operatic singing in MCS’ Young Classical Singers program, which has almost a dozen members. The offshoot is part of their larger vocal program, which includes several dozen students.

“We have students from different backgrounds with different goals, but we do teach the classical approach to singing, Bel Canto, which is ‘the art of beautiful singing,’” Wedemeyer said. “In a world where we get rewards quickly, when you build skills over a long time, you feel you really earn the reward. The beauty of the human voice is an experience worth preserving. Here, where we could potentially be a cultural island, it’s important that students understand the multitude of cultural experiences.”

Hansel & Gretel is one of two performances the Bel Canto Opera puts on annually, each produced to breathe fresh air into the traditional opera concept.

“Everything we do is handcrafted,” Wedemeyer said. “At times we create our own story and we use operatic language to do it. … This is what attracts the next generation, because opera does not need to be stuffy. The response from the younger generation has been really positive. We’re looking to grow in that direction.”