It’s tough saying goodbye to good people, especially when they leave Sandpoint’s tight-knit music community. When local musician and award-winning beertender Samantha Carston announced she was moving to Chicago, there were a lot of sad, yet supportive faces moping around. 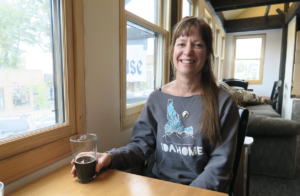 Carston, who is most known for playing in the trio Browne Salmon Truck with Truck Mills and Andrew Browne, as well as serving as manager at Idaho Pour Authority, said the move is a way to shake things up a bit.

“I always wanted to live in a city and I never have,” Carston said. “At this point, nothing is holding me back.”

Her life in Sandpoint has been defined by music, and music has been in Carston’s blood from the time she first moved to Idaho when she was 10 years old. Her father played music in Athol for years, forming what she referred to as a “family band” full of friends and family.

Carston’s first foray into music came when singing Christmas songs with her father.

“I was super shy,” she said. “He started playing music with this other family — my brother’s friend’s family in Athol. When I was 15, I was helping him set up for a show and he was playing a riff, so I was helping with sound check on the mic and made up this little song. It was when Zima first came out, and I saw a Zima in my old man’s hand one time, so made up a little song about it.”

During the show that night, Carston said she didn’t know what came over her, because she suddenly ran onto the stage to sing with the band — something she’d never done before.

“I just started singing,” she said. “Then we formed a band.”

Carston joined the band, which eventually morphed into the Zach Cooper Band, and sang backup from time to time.

It wasn’t until moving to Hawaii that she finally embraced her desire to play live music and dropped her shyness once and for all.

“I just like connecting with people and having that exchange between music and listeners,” she said.

Upon returning to Sandpoint in 2007, Carston started hanging around the weekly Open Blues Jam at Eichardt’s on Monday nights. She met host Mills and Browne and the three eventually formed Browne Salmon Truck, playing a mix of jazz, blues and standards. Carston found her place as the lead vocalist, usually showing up to each show looking fabulous in something shiny. Watching them perform on stage, it’s hard to deny the three enjoyed a natural charisma.

“It was magic; it was effortless,” she said. “Truck and Drew both just completely raise my frequency when I play with them. And I’ve learned so much from them. I feel like I am a musician now, and it has a lot to do with them.”

Carston said it’s been an emotional ride the past couple weeks as she put her affairs in order before leaving town. One hard goodbye was with her place of employment for the past four and a half years: Idaho Pour Authority, owned by Jon Hagadone and Vicki Reich.

“They have been the most generous people I’ve ever worked for,” Carston said. “We just totally jive, you know?”

“Samantha has grown so much and has become an integral part of the team over the years,” Jon Hagadone said. “We’re really going to miss her.”

A side project of Carston’s has been performing solo on her ukulele — a challenge she gave herself at Idaho Pour Authority after playing a weekly set at the store.

“I decided to push myself,” Carston said. “At 2:22 p.m. on Tuesdays, we usually taste 2 ounces of beer and I would sing two tunes. It started last March and went through last winter.”

The mini set was a chance for Carston to feel more comfortable on stage alone, singing while playing the ukulele. But it wasn’t until Brandon Emch at The Back Door bar convinced her to book a solo show that she actually took the plunge.

“It really was that little push that started me off,” she said. “I’m grateful to him for it.”

Carston said she plans to start hitting the open mics in Chicago once she’s settled, and will be actively searching for musicians to play with. While she anticipates an emotional goodbye to Sandpoint when she hits the road in her Prius with her cat Moose, she wanted to thank all of the people in Sandpoint who have made it a special place.

We’ll miss you, too, Samantha.