According to Sandpoint resident Donald Kass, Donald Trump hasn’t changed a whole lot since he knew him as Donny Trump in grade school.

“He was pig headed,” said Kass. “He never listened to anyone in those days. He wasn’t quite as pathological then as he is now, though.” 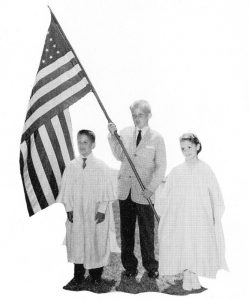 Donald Trump, center, holding the flag during a 1958 graduation at Kew-Forest School in Forest Lawn, NY.

Kass was one grade ahead of Trump at the private Kew-Forest School in a Queens, N.Y.,  neighborhood called Forest Hills. They both attended in the late 1950s and both grew up in Queens, though Trump lived in the upper middle class neighborhood of Jamaica Estates.

Trump attended the Kew-Forest School through seventh grade, when his father took him out of the school and sent him literally up the river to New York Military Academy in the Hudson Valley.

Kass remembers Trump as a troublemaker: “He misbehaved. I don’t know if they actually threw him out, but I think his father decided he should send him to military school.”

Trump’s father, Fred Trump, was a “big wheel” at Kew-Forest, according to Kass.

“He was on the board of trustees,” said Kass. “[Donald] would never have been thrown out of school because the principal at the time, being who he was, was a friend of his father. If [Fred Trump] would tell them to do something, they would’ve done it.”

It was fairly common for children of notable parents to attend Kew-Forest School.

“I always thought the Trumps were Democrats, but they said they were Republican,” said Kass. “They had to kowtow a lot with the Democratic party because they had all the power in New York City.”

Kass said lots of Democratic politicians sent their kids to Kew-Forest: “There were state senators’ children, congressmen’s children, judge’s children… the first principal had good connections to the colleges so he could assure the parents that their children would get into good colleges.”

For Kass, the memory of Donny Trump was mostly dominated by his stature and his swaggering temperament.

“He was a tall kid, big for his age,” said Kass. “He would get an idea in his head, and he’d be wrong, and you would tell him he was wrong and the next day he would say the same thing. You could never convince him of anything.”

Kass remembers a trivial incident involving the name of a popular wrestler where Trump refused to admit he was wrong.

Even Trump has acknowledged the similarities between himself as an adult and when he was a child. 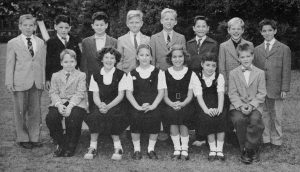 Donald Trump, fourth from left in back row, was in the class one year behind Donald Kass. Photo from Kew-Forest 1958 yearbook.

Kass also remembers summer outings he and Donald shared with their gym teacher.

“We all went to summer camp in those days,” said Kass. “There were a couple of weeks in June and September between camp and school. Our gym teacher would take a bunch of us kids in his station wagon to go play, or to the museum, or to the park. We both went, Donald and I. We spent a lot of days together.”

Kass’ impression of the presidential candidate in his grade school years is similar to many of Trump’s former classmates.

Dennis Burnham was four years younger and lived around the corner from the Trumps in the 1950s. Burnham’s mother warned that Dennis should “stay away from the Trumps.”

“Donald was known to be a bully, I was a little kid, and my parents didn’t want me beaten up,” Burnham told the Washington Post.

Another schoolyard chum, Steve Nachtigall, said he remembers Trump and his friends riding around on their bikes shouting and cursing very loudly.

“It’s kind of like a little video snippet that remains in my brain because I think it was so unusual and terrifying at that age,” Nachtigall told the Washington Post. “He was a loudmouth bully.”

One story that Trump recalled in “The Art of the Deal” involves an incident where he gave a music teacher a black eye because “I didn’t think he knew anything about music, and I almost got expelled.”

Kass said he believes Trump made that story up: “I met the music teacher many years later and asked him about the incident and he said it never happened.”

Kass also remembers Trump as a good athlete in baseball.

“He was a good player, but he always hit the ball to right field,” said Kass. “He never went left, always right. So there you go.”

Kass went on to graduate from Kew-Forest in 1963 and eventually obtained a PhD from the University of Chicago in agronomy, which is the study of crop and soil science. He lived and worked in Costa Rica, worked for the FDA and recently moved to Sandpoint to be closer to his son and granddaughter, who both live in Creston, B.C.

Will Kass be voting for his old schoolmate Trump in November?

“Not a chance,” said Kass. “I don’t agree with his politics. I’m getting social security and a federal pension. I think Hillary will protect social security more than Trump.”