A second life on Second Avenue

For Scott Wilburn, music is a family matter. From his childhood as the son of a church organist to the way he’s raised his kids to understand guitar workmanship, constantly having instruments around has become a trademark of his everyday life. 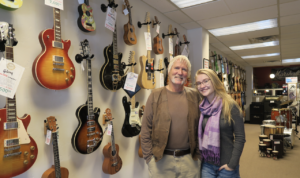 “Mom always had a piano and an organ and a guitar and everything else in the house, so I grew up just playing,” he said.

After joining his first rock band in 1972 as a freshman in high school, Wilburn said life as a musician never really stopped. He said he was a part of several bands out of high school and realized pretty quickly that broken instruments were an occupational hazard.

“Fixing guitars was simply a necessity,” Wilburn said. “I thought, ‘OK, I’m a musician, I have to be able to do this myself,’ so I just started figuring it out.”

That hobby then became a financial supplement to his day job when his wife took time off from her career as a surgical nurse to be home with their young children.

“I had to find a way to make my guitar collecting not take away from the rent paying,” Wilburn said with a laugh.

Thus, Wilburn Custom Shop was born in 1999 — on eBay. Thanks to his day job working in graphic design and his niche abilities as a custom guitar builder and repairman, Wilburn’s business page started attracting clients from around the world. Still, Wilburn Custom Shop suffered in the economic meltdown of 2008. Yet, in 2009, change was in the air and the Wilburns moved from the Tri-Cities to Sandpoint.

“We decided we needed to be closer to what we did most, which was snow skiing and water skiing,” Wilburn said.

At the time, it seemed a custom guitar builder and repairman was exactly what Sandpoint needed. As more and more people became aware of Wilburn’s skills — including other local music store owners — they started coming to him for help. After being the third-party repairman for a few years, Wilburn Custom Shop first took physical form on First Avenue in 2014, and remained there until just recently.

The shop provides a large inventory of acoustic and electric guitars, basses, ukuleles, drums, pianos, keyboards, amps, PA systems, accessories and parts. It also offers instrument repair and customization; lessons on guitar, bass and keys; and access to a recording studio in the back of the store.

Wilburn rented the previous location on First Avenue until February, when the landlord came by with tough news: He’d sold the building and the new tenants intended to use the space in other ways. It meant the Wilburns had 30 days to move out.

“It happened so fast,” Wilburn said. “We didn’t plan.”

After a huge closing sale, Wilburn said he wondered how his family would get everything moved out in time. Luckily, the community stepped in.

“People just came out of the woodwork,” he said. “We moved that 6,000-square-foot monstrosity of a store in effectively three days because people just showed up and helped.”

Wilburn said he owes a huge thanks to Red Simpson of Fiddlin’ Red’s Music on Church Street for both helping him move from the old location and for consigning some of his inventory while the storefront was down. While Simpson does repair instruments at his store, he does not deal with electronics like Wilburn does.

“In a lot of towns, the other music store would be rooting for us to go down,” Wilburn said. “[Red] rolled up his sleeves and came over and helped [move], and helped us pay our bills by selling our stuff. The real story here — from my point of view — is how the community takes care of its own.”

Now, nestled comfortably on the corner of Church and Second at 118B N. Second Ave., Wilburn and his daughter Sarah are back to doing what they do best — keeping local and regional musicians in business. Wilburn said Sarah has a particular gift when it comes to their line of work.

“Not only does she fix stuff, string stuff and all that, but she’s gotten really into detailing [guitars] so that it’s almost restoration,” he said. “Some of that stuff comes in really rough and it goes out shining like a new penny.”

Sarah and her brother Stanton make Wilburn Custom Shop a true family business, having both helped their dad with building and fixing guitars from early ages.

“Yeah, you asked why we keep doing this,” Wilburn added. “Mainly because it’s a ton of fun.”