The Bonner County Planning and Zoning Commission voted unanimously Nov. 18 to recommend denial of a 700-acre rezone request in the Selle Valley — a file that drew opposition from a broad spectrum of residents concerned that changing the property located along Colburn Culver and Rapid Lightning roads from a 20- to 10-acre parcel minimum would lead to development too dense for the area.

The file now goes to the Bonner County Commissioners, who will make the final decision on the application on Feb. 9, 2022. 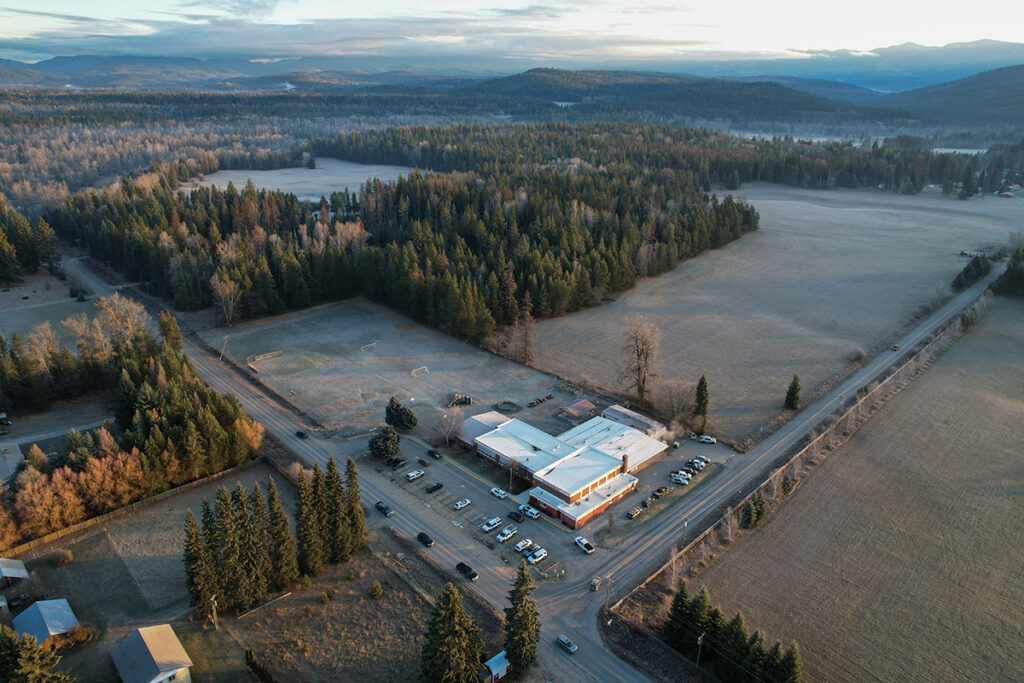 An aerial shot of the Selle Valley in an area where the Bonner County Planning and Zoning Commission recently recommended denial of a rezone request. Photo by Max Zuberbuhler.

Dan Provolt, a surveyor representing land owners “Pack River Partners LLC/Don & Julie Skinner/James and Diane Otis,” shared that back in 2008 when the county enacted an overhaul of its zoning map — including changing the land in question from a 10-acre to a 20-acre minimum — notice was only published in the Bonner County Daily Bee. Rather than that simple legal notice, Provolt argued, the county should have personally contacted his clients — the Skinners and Otises, who own the 700 acres in question.

“He wasn’t informed,” Provolt said Nov. 18, referring to landowner Don Skinner. “I know it still meets the letter of the law … but it didn’t give him a chance to argue against this. Somebody else decided, ‘Let’s make that 20,’ without his consent, concerns, discussions. They didn’t have a chance to challenge any part. One day he just wakes up and his land is no longer 10-acre zones, it’s 20-acre zones. That’s half the value. That’s not what he purchased.”

Provolt acknowledged that his client’s file drew wide opposition due to a belief that upzoning — zoning to create more parcels — would pave the way for development of up to 70 new homes in the area. Provolt stated that the landowner is “never going to become a developer.”

“He’s not going to be developing it,” he continued. “He just wants it back to where it was when it was purchased.”

Planning and Zoning Commissioner Suzanne Glasoe pointed to portions of the application that cite “landowner flexibility” and “residential growth” as reasons for the rezone.

Provolt pointed to 10-acre zones in the surrounding area, including directly across Colburn Culver Road.

“I know people like wide open spaces, but this is still private property,” he said, also noting several small farms and farm stands in the area operating on 10 or fewer acres as examples of viable agricultural uses.

Still, when it came time for public comment, the audience was not convinced that development on 10-acre pieces would remain rural in nature.

“Overwhelmingly, the people want Selle Valley to stay rural,” said local resident and real estate agent Doug Gunter, adding later in his comments: “What I can guarantee you is that those 10-acre parcels will have 3,000-square-foot homes, paved driveways and gates at the beginning of them, and the local hobby farmers simply can’t compete with the folks coming from out of state, and those folks aren’t going to spend their million dollars selling flowers in the front yard.”

Nearly 30 people spoke during public comment, all opposed to the rezone, many pointing to a lack of public services and adequate infrastructure, concerns about water availability and the application’s lack of adherence to the Selle-Samuels Subarea Plan, which prioritizes rural character and aims to avoid upzoning.

Susan Drumheller, who identified herself as a supporter of the recently formed Keep Bonner County Rural watchdog citizen group, urged the commission to avoid “upzoning in a really treasured area” and thanked them for their volunteer service.

“This is complicated stuff, and it’s emotional, and you have to weigh a lot of things,” she said. “I know it’s not easy to have a room overflowing with concerned citizens, but people are starting to see their way of life change and the impacts, and the fact that resources are being impacted and services aren’t really there for all this development.”

The meeting, which lasted for nearly three and a half hours, saw emotions run high at times. Commission Chair Brian Bailey intervened during a particularly pointed comment, stating: “We’re all community here. You got a beef with somebody, take it outside.”

Katie Cox, executive director of Kaniksu Land Trust, stated that while KLT “does not generally comment on development proposals,” the conservation nonprofit felt it necessary to voice opposition to the rezone because, “the decision to double the allowable density on these lands will have a notable impact on the rural character of this valley into the future.”

The fear of setting a poor precedent dominated public discourse at the meeting, with Selle Valley resident Kristina Kingsland stating: “At some point we have to say ‘no’ to somebody, somewhere, and make things make sense.”