Bonner County issued a complaint for declaratory and injunctive relief against developer Craig Hermsmeyer on July 13 for the landowner’s unpermitted RV park development on Camp Peine Road in Sagle. The complaint alleges that Hermsmeyer has constructed and is operating a multi-space RV park in a residentially zoned area without obtaining any permits from necessary agencies, which include Bonner County, Idaho Department of Lands, Army Corps of Engineers and the Panhandle Health District. 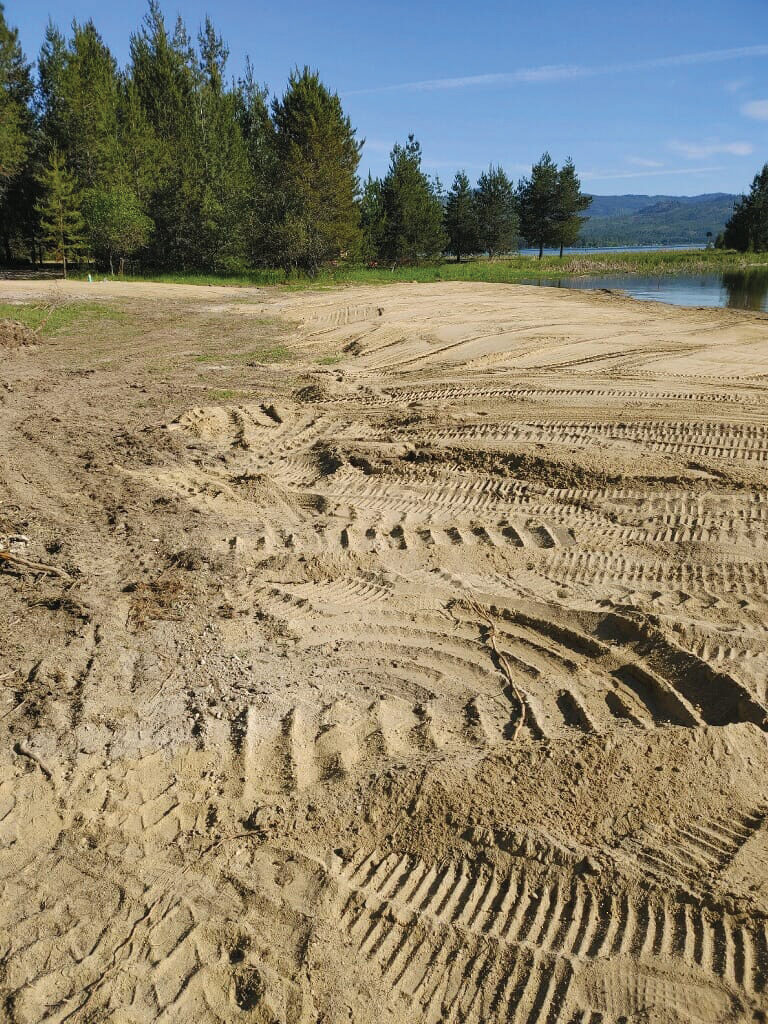 A new sandy beach has been installed over non-invasive vegetation at the Sagle property. Photo courtesy Bob Payne/Facebook.

The property in question is located on Camp Peine Road in Sagle, near Morton Slough.

The Bonner County Planning Department took action after receiving a formal complaint with photos that outlined the construction, including a dock/pier and a new sandy beach, neither of which are allowed under County Code.

Count 1 of the complaint alleges that Hermsmeyer has constructed rental spaces designed to accommodate RVs, in violation of zoning ordinances. Count 2 alleges that Hermsmeyer violated the “vegetative buffer management” area on the property, which requires developers to leave a 40-foot buffer zone on any shoreline, as well as requires the landowner to leave non-invasive vegetation intact. The complaint alleges Hermsmeyer destroyed non-invasive vegetation to construct a sandy beach on the property.

Count 3 of the complaint seeks a mandatory injunction for Hermsmeyer to cease operation of the RV park and return the vegetative buffer management area to its pre-existing natural state.

Bonner County Planning Director Milton Ollerton told the Reader that Hermsmeyer was served with two stop work orders on June 23 and June 30, both of which were ignored as work continued.

Ollerton said obtaining the correct permits prior to building is not only a lawful activity, but helps ensure future developments do not negatively impact the environment.

“The permits ensure the project is designed properly and ultimately built according to design,” Ollerton said. “The permits ensure that projects to be built will not cause additional impact [to] the sensitive nature of the environment. For example, when one changes the absorption rate of the soil by removing vegetation and putting in gravel or even a roof, it increases the rate of runoff into the lake or onto another property. The purpose of the design is to slow the runoff so soils and other potential contaminants don’t wash into the waterbody.

“Failing to obtain a permit does not allow the design to be studied to ensure compliance with these ordinances,” he said.

Neighbors complained about Hermsmeyer’s development, claiming his actions have the potential to set a dangerous precedent if not held in check by the county.

“The owner wiped out an inlet off the river at the waterfront,” wrote Bob Payne on a Sagle Facebook forum. “He brought in heavy equipment to destroy the natural aquatic life and vegetation and dredged the inlet so to speak with equipment while the water was down. He then replaced what was dug out with hundreds of yards of sand to create a beach along the entire frontage of the property. No permits of any kind through IDL or Army Corps of Engineers to do so.”

Ollerton said if Hermsmeyer ignored the injunction, as he ignored the two previous stop-work orders, “it becomes a contempt of court claim and that carries its own penalties. Additionally, the county could file additional charges and even consider a criminal complaint. Finally, any judgment will include a provision stating that if the defendant violates it in any way or fails to clean the property as directed, the county can unilaterally do the work and bill him for that service.”

Hermsmeyer was contacted at his painting company — which has a California business license listed, but a Sandpoint mailing address — but did not reply by press time.

A staff report filed by the Bonner County Planning Department on Sept. 17, 2020 establishes that Hermeyer’s property “borders the Pend Oreille River to the west and has lake wetlands and freshwater emergent wetlands present.” The report claims the applicant requested a width variance change for the lots on the property.

Payne wrote on Facebook that the developer must be held responsible for violations of codes and laws.

“There needs to be a clear message sent that it is not acceptable to lie and disrespect every law and agencies involved from city, county to state laws to create whatever development desired,” Payne wrote. “If this [is] allowed then anyone with this type of money can move in and build whatever they want.”