Somewhere on the dark, quiet streets of south Sandpoint, Wentworth the cat is on the prowl, searching for another pair of flip-flops to steal.

The sandal-stealing feline, owned by a Sandpoint woman who asked only to be identified as “Amber,” has made himself known throughout the neighborhood as the “cat who steals flip-flops.”

“I have two cats — they’re brothers — but only one of them does it,” Amber told the Reader. “He just kind of gave up hunting and thought it would be easier to steal shit off people’s porches and yards. He’ll even walk into neighbors’ houses if they leave the door open.” 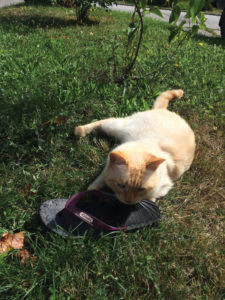 Wentworth posing with one of his latest ill-gotten acquisitions. Courtesy photo.

Amber’s neighbors, Duffy and Leah Mahoney, had their first encounter with Wentworth this summer, during the first week of the Festival at Sandpoint.

“We had some people staying at our house and we came back after the concert to hang out on our porch,” Leah said. “The next morning, Duffy woke up and couldn’t find his flip-flops.”

“I tore my house apart looking for them,” Duffy said. “Then, we go to the Festival the next night and I’m wearing sandal pair No. 2 and again we hang out on the porch, where I took my sandals off and wake up in the morning and this pair is gone, too.”

At this point, Duffy thought friends were playing a prank on him.

“They all said, ‘We don’t know anything about your stupid sandals,’” Duffy said.

After purchasing a new pair from 7B Boardshop, Duffy’s neighbor Amber showed up at his house the following week with a bag full of shoes and asked if anyone was “missing any flip-flops.”

“One of our friends burst into our bedroom yelling, ‘It was a cat! A cat stole your shoes!’” Leah said.

It turns out, Wentworth has been a busy little kitty this summer. In previous years, he presented mice and other small offerings to his owner, but for some reason, 2019 turned out to be the Year of the Sandal for Wentworth. Now, he stalks after the errant sandals that neighbors leave on their porches and yards and spirits away into the night with the pilfered goods.

“He is a naughty kitty,” Amber said of Wentworth. “One time, a neighbor said he went inside for just a moment and came back outside and, in a matter of minutes, Wentworth took his shoes.”

The problem has grown so chronic that Amber puts stolen flip-flops in her mailbox for neighbors to check when they are missing shoes. She also makes regular trips around the neighborhood with a bag full of heisted shoes, attempting to track down the owners who may not know there is an active —literal— cat burglar in the vicinity.

After delivering Duffy’s missing shoes, Amber stayed for a couple of front-porch beers — in the midst of which Wentworth appeared from the shadows and pulled off a brazen theft right in front of the group.

“Here he comes down the sidewalk,” Amber said. “Everybody left their flip-flops on the porch, and he waited for all of them to not be paying attention when all of a sudden, he grabs one of our neighbor Jason’s daughter’s flip-flops in a beach bag and takes off through the grass. He was carrying it like a lion would carry a gazelle. Jason said to me, ‘I didn’t think you were lying, but I didn’t really believe you until now.’”

Amber said Wentworth prefers Hawaiian brands of flip-flops, like Locals, and generally steals shoes in pairs as opposed to singly.

“Unfortunately, none of them have ever been my size,” she said. 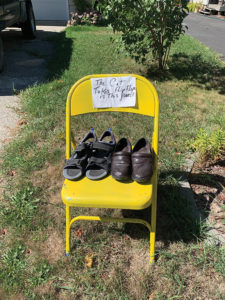 The famous yellow chair placed outside Amber’s house with a rotating supply of sandals for neighbors to claim. Courtesy photo.

He has recently shown signs of graduating from stealing sandals to full-blown sneakers.

“He stole a couple pairs of sneakers this summer, even a couple pairs of knock-off Danskos,” Amber said. “One neighbor put out a shitty one-dollar flip-flop and tied some dental floss to it, [hanging] through his window and tied it to his finger to wake him up, but Wentworth is smarter than that. He just moved onto the sneakers and stole them instead, leaving the flip-flop alone.”

Now that the neighborhood has become aware of the problem, Amber said Wentworth’s conquests have begun to diminish.

“It’s gotta be a little disappointing for him,” she said. “People are not leaving their flip-flops lying around as often because of him.”

In all, Duffy Mahoney has had three pairs of shoes stolen by Wentworth, but he and the rest of the neighbors receive the news in good fun.

“What I want to know is, how the hell do you train a cat to do this?” he said.

If you or someone you know are missing sandals, seek out the yellow chair in south Sandpoint, where Wentworth’s latest haul is on offer for owners to claim.