The public hearing will be held at 9 a.m. Aug. 2 at the Idaho Capitol in Boise

According to the Idaho Legislature’s House Journal, the House Ethics Committee has received two complaints against Rep. Priscilla Giddings, R-White Bird, alleging conduct unbecoming of a representative which is detrimental to the integrity of the House as a legislative body.

The journal states the committee conducted a preliminary investigation and found probable cause exists that misconduct may have occurred regarding a portion of each complaint.

The complaints, which were obtained by the Idaho Capital Sun through a public records request, were filed in April and May. The first complaint was filed by Rep. Greg Chaney, R-Caldwell, on April 19 stating Giddings revealed the name and photo of the 19-year-old legislative staffer who accused former-Rep. Aaron von Ehlinger, R-Lewiston, of rape. Giddings posted a link to her Facebook page with the woman’s information.

Chaney also wrote that Giddings misled the public by writing “Follow the money!” on her Facebook post and implying misconduct on the part of the Ethics Committee representatives and House leadership.

The second complaint, which was filed on May 3, lists two reasons for conduct unbecoming — the first was Giddings’ actions in revealing the legislative intern’s information, and the second was misrepresenting her actions when she appeared before the ethics committee during von Ehlinger’s hearing. Giddings denied posting the information on Facebook and would not answer when asked if she was the administrator of the page, and the complaint says she can be held in contempt of the committee. 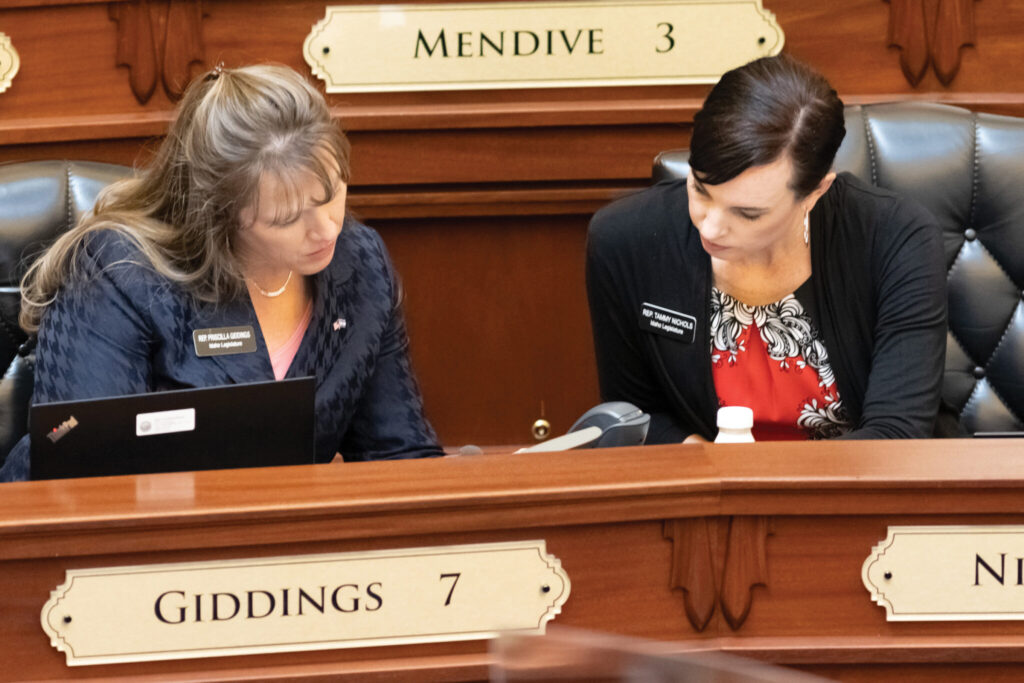 The second complaint is signed by many more legislators, including Chaney. In total, 15 Republicans and seven Democrats in the House signed their names, including Speaker of the House Scott Bedke, R-Oakley, and Majority Caucus Chair Megan Blanksma, R-Hammett.

“It comes as no surprise that Speaker Bedke, who recently announced he is running for Lt. Governor, is trying to use his position and perhaps tens of thousands of your hard-earned tax dollars in a blatant attempt to defeat me, his primary opponent,” Giddings wrote.

Annie Hightower, who represented the staffer who was identified by Giddings, told the Sun the committee made the appropriate decision.

“People who experience sexual violence choose the majority of the time not to report it for many reasons, one of those reasons being that they are scared for their safety, particularly if it’s someone in a position of power who assaulted them,” Hightower said. “So if we’re really invested in making sure victims feel safe to come forward, then Rep. Giddings’ behavior needs to be investigated and there needs to be some accountability for it.”

Von Ehlinger said he did nothing wrong but resigned his seat after the Ethics Committee voted to have him suspended. Boise Police Department spokesperson Haley Williams told the Idaho Capital Sun on Tuesday that the findings of the criminal investigation of the rape allegation have been referred to the Ada County Prosecutor’s Office for a decision on charges.

Emily Lowe, spokesperson for the Ada County Prosecutor’s Office, said the office has received the police reports and further investigation is ongoing. No charges have been filed.

Boise State Public Radio also reported an email showed the Air Force Academy was looking into complaints against Giddings, who is a fighter pilot, an academy graduate and a major in the Air Force Reserves.

The committee will hold a public hearing on both partial complaints at 9 a.m. Aug. 2 at the Idaho Capitol in Boise, and if necessary, the hearing will continue on the following day.

This story was produced by the Idaho Capital Sun, an independent, nonprofit online news organization delivering in-depth coverage from veteran Idaho reporters on state government and policy. The Idaho Capitol Sun is part of States Newsroom, a national nonprofit funded by tax-free donations in 22 states. Learn more and follow daily updates at idahocapitalsun.com and statesnewsroom.com.