At its regular meeting July 20, the Sandpoint Planning and Zoning Commission heard a presentation from senior administrators as well as brand-new staff members on sweeping plans for “turning downtown around,” as City Administrator Jennifer Stapleton put it — literally reorienting the downtown core away from First Avenue and toward Sand Creek. 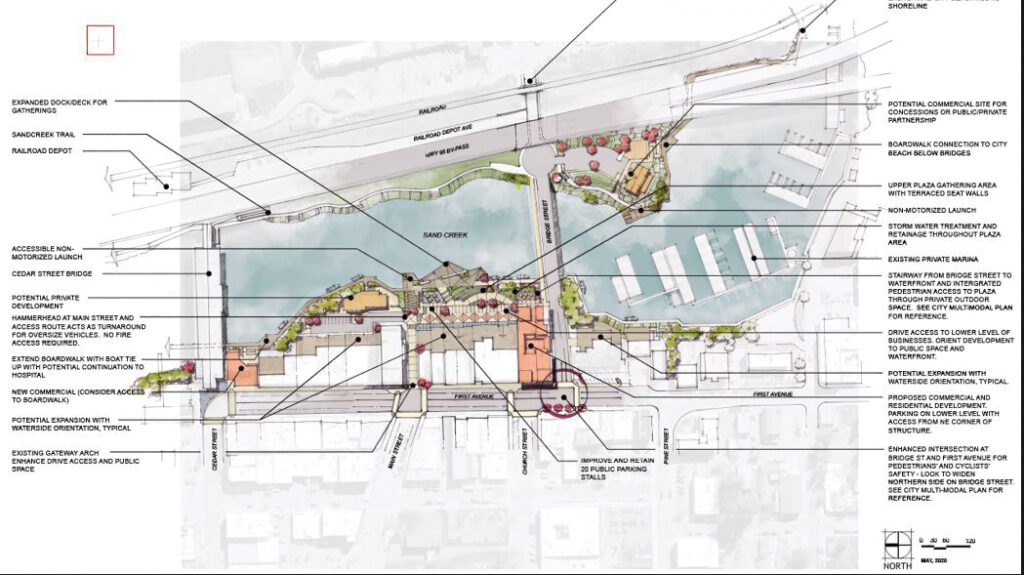 A concept drawing of proposed changes to the Sand Creek waterfront in downtown Sandpoint. Courtesy image.

Stapleton said that while the city’s purchase of the waterfront property from Bridge Street to Gunning’s Alley in 2016 was first fronted as an effort to improve stormwater management, it also presented the opportunity for redeveloping the space hitherto used as parking into a “park-like setting” for downtown — a vision outlined in the city’s Parks, Recreation and Open Spaces Master Plan, approved by the Sandpoint City Council last year.

“Our focus and priority with downtown was to treat our downtown as a park, with businesses in it, with residential in it,” Stapleton said. That means, she added, “turning the downtown around so that it faced the byway, it faced Sand Creek, instead of having this single orientation toward First Avenue.”

In the presentation, interim Planner Daren Fluke cited a slide with the phrase “Sandpoint = recreation,” stating that the plan encompasses more than the city’s acquisition of Gunning’s Alley, and truly extends from Cedar Street south to Superior Avenue.

“Both the city and the community have a keen interest in further improving the west side of Sand Creek,” Fluke said.

As interim planner, Fluke follows the brief tenure of Susan Lauinger, formerly of Kirkland, Wash., now of Sandpoint (who served in the position from early-May to mid-June), and Aaron Qualls, who left City Hall after a long career as a P&Z commissioner, City Council member and planner in late-2020.

Meanwhile, Stapleton introduced Tess Cooper, currently of Whidbey Island, Wash., though in the process of moving to Sandpoint, who will serve as senior planner with almost 10 years of city and county planning experience.

“I’m really excited about … the code revisions and changes that are coming up,” said Cooper.

Those changes, however, are a “problem” facing the waterfront project, as Fluke said, in that City Code is getting in the way of the plan — specifically, that Title IX, Chapter 2, Section I-4 doesn’t allow structures to be built within 25 feet of the vegetative buffer from the high water mark of Sand Creek. and the definition of “structure” is too vague, encompassing, as Director of Infrastructure and Development Amanda Wilson cited from current code, “that which is built or constructed,” meaning “pretty much everything on this [map of proposed waterfront redevelopment] would not be possible.”

That’s why city staff is proposing amendments to City Code, which would allow for a range of redevelopment projects between Bridge and Cedar streets, from a “plaza gathering area with terraced seat walls” to a “dock/deck for gatherings” extending about 25 feet into the watercourse to an extended boardwalk with boat tie-up in front of the former Arlo’s restaurant site immediately adjacent to Cedar Street Bridge. Plans also suggest extension of the boardwalk under the bridge to Bonner General Health.

On the opposite bank, the plan envisions converting the current parking area south of Bridge Street as either a potential commercial development or — as is preferred by both planners and organizers — the site of the Carousel of Smiles.

“The vision of the community is to treat downtown as a park, therefore we need a code that is flexible and thoughtful to integrate buildings into a park-like urban fabric,” Fluke said. “This is fairly common among cities, especially in the West. … We turned our back on the water.”

Wilson nodded to other communities that have developed their waterfronts into park-like amenities, referring specifically to San Antonio, Texas; Napa, Calif.; and Portland, Ore.

“You see it around the country,” she said.

“It doesn’t scare me at all to change it,” said Maeve Nevins-Lauter of the City Code section.

Stapleton announced Nevins-Lauter’s hiring as the new parks planning and development manager at the July 20 meeting. The former will work alongside longtime Parks and Rec. Director Kim Woodruff, but report to Stapleton on matters related to development projects. Nevins-Lauter recently moved to Sandpoint from Anchorage, Alaska, where she also worked on development and planning.

Stapleton said that, as a result of the city’s master planning efforts regarding waterfront redevelopment, “We’re starting to see properties changing hands.”

P&Z Commission Chairman Welker, in a phone conversation with the Reader, said he wasn’t privy to which properties in that area were on the market.

Stapleton likewise told the Reader that “the city has not received any official applications” for the properties in the area, though added that developers are “coming in with our concept and saying, ‘We see alignment with this’ … That plan was also about spurring economic development.”

Some of those applications are anticipated by the city to come to the forefront “within the next six months or so,” Stapleton said.

Wilson underscored the attraction of the downtown plan, telling the Reader, “I literally have realtors call me and ask for the master plan.”

What that means for existing First Avenue merchants remains to be seen. While city officials said extensive outreach has been conducted among downtown businesses from 2009 to 2019 — expressing support for the waterfront portion of the plan — “it is very reasonable that we will see redevelopment occur,” Stapleton said, referring to the properties on the east side of First Avenue.

Asked how waterfront redevelopment might affect parking downtown, Stapleton said the city plans to launch a parking study “in the next few months, and we are going to be looking at parking options and a parking structure at our city parking lot” — an idea long discussed by city planners.

“City administration recognizes that parking is a growing challenge around downtown and we need to get moving quickly on some solutions to remedy it,” Stapleton said.

Meanwhile, Fluke said, “This is the heart of the town and the regulations are rightfully very rigorous for developing within the Commercial A zone.”

Regardless, those regulations are “outdated,” according to Nevins-Lauter, for the current plan.

Planning and Zoning Commission Chairman Jason Welker asked, “Basically none of this could be done with the 25-foot setback?,” to which city staff answered, “Yes.”

Welker asked what the city plans to do to protect itself against flood damage, which has occurred repeatedly in Sandpoint’s history.

Wilson responded, “I’ll give you the sound bite answer: We’re going to build it correctly.”

P&Z Chairman Welker, in an interview with the Reader after the meeting, said the plan, if executed, will “change the character of downtown forever,” and stressed that citizens should be involved with the upcoming public hearing.

“There shouldn’t be a rush,” he said. “The urgency of all of this is what concerns me.”

The next steps in the process include fine tuning and drafting the text of the code amendments, which will then be noticed prior to a public hearing before Planning and Zoning on Tuesday, Aug. 17. Following that, the proposal will go before the Sandpoint City Council at its regular Wednesday, Sept. 1 meeting at City Hall (1123 Lake St.). In the meantime, city staff stated that full documents will be posted on the city’s website — sandpointidaho.gov — on Tuesday, July 27.