My husband Alex and I did not go on a honeymoon immediately following our wedding in July 2021. Having hosted the ceremony and reception at our home — and taken time off to prepare everything — we decided we’d rather wait until the following summer to leave town.

We briefly considered something traditional; a trip to Hawaii, or some other beach, seemed like the thing to do. But after a bit of soul searching, I proposed we do something I always wanted to do: see dinosaur bones.

And that we did, road tripping to the Museum of the Rockies in Bozeman, Mont., and stopping to stay in other towns along the way.

Aside from the dinosaurs, the rest of the itinerary was pretty simple: eat food and try new beers. Our idea of a good time is dining out and drinking craft beer. To do that for four days? A dream.

Our first stop was Highlander Beer in Missoula, thanks to recommendations from a beer-loving friend and my well-traveled sister. 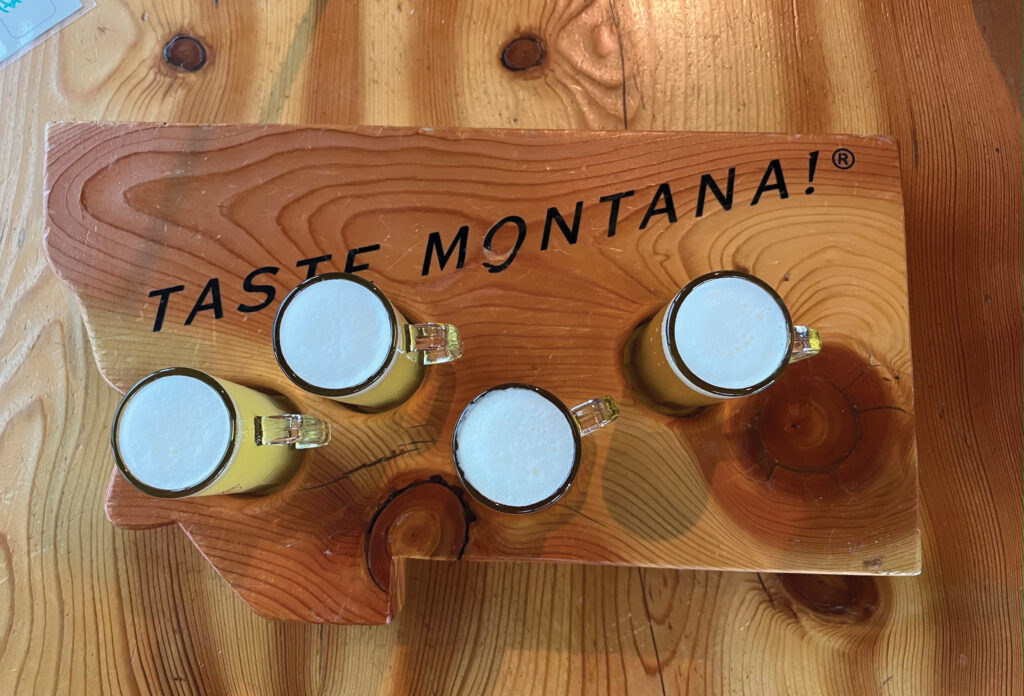 A taster flight at the Highlander Beer taproom in Missoula, Montana. Photo by Lyndsie Kiebert-Carey.

Easy parking and a spacious seating area — even on a Saturday — immediately left a good impression. We ordered a flight at the bar in our typical fashion: two IPAs (my favorite) and two less-hoppy picks for Alex. This selection produced some real mixed opinions, as recorded in my phone’s notes app with beer names and emojis.

For the winners, we had the supremely juicy Galactic Approach IPA on my side of the wooden, Montana-shaped flight board, while Alex ended up buying a six-pack of the Pocket Cowboy Cerveza. The Grapefruit Jumbo IPA gets an honorable mention, while the Strawberry Wheat earns the award for Beer That Tastes Most Like Bubbly Strawberry Milk.

The next day, some trial and error led us to a taproom near our hotel that wasn’t stuffed to the gills with Sunday beer drinkers: Bozeman Brewing Company.

Alex, not normally one to enjoy an amber, had nothing but nice things to say about the Bozone Amber Ale. As for me, the Haze Trip Hazy IPA was as smooth and light as the barkeep said, earning a satisfied smile emoji in my very official phone notes. The EcoStar IPA however, received a frog emoji. If green has a flavor, it is this beer.

Without a doubt, Bozeman Brewing featured the friendliest and most helpful staff — one guy, despite a busy bar, took the time to describe every IPA to me in detail.

Our final beer mission took us to Butte Brewing Company, where the atmosphere (a brand new two-story building featuring a refrigerated copper strip on the bar top and a breathtaking view of the valley) far outplayed the beer.

After an underwhelming flight, Alex found solace in the Ore Digger Ale and I took a chance on the Mountain Haze IPA. It was cold and paired well with the incredible Mediterranean pizza.

All in all, Highlander took the cake for good beer; Bozeman had the best service; and Butte, the coolest location.

Of course, the best part about every brewery is the guy next to me at the bar, willing to try anything and give me his opinion. Cheers to him, and adventurous husbands everywhere.