Between the damned and the damning

Clemency explores the relationship between a warden and death row inmate 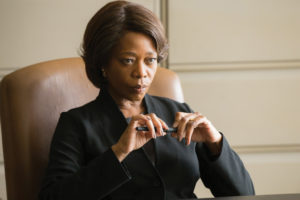 Since 1976, when the United States affirmed the legality of capital punishment, more than 7,800 people have been sentenced to death, 1,517 of which have been executed. The practice remains controversial in the United States, which holds the distinction as the only developed Western nation that still regularly applies the punishment. It’s an issue that won’t go away any time soon.

The Panida’s upcoming film Clemency, screening Thursday, March 12-Sunday, March 15, explores the issue through the eyes of Bernadine Williams, a career warden at a men’s prison played brilliantly by Alfre Woodard. A familiar face as a supporting actress, Woodard’s roles in everything from TV’s Empire to Captain America: Civil War and 12 Years a Slave have earned her a reputation as an accomplished actress who delves deep into her roles.

Normally a meticulous, carefully calibrated professional who meets the emotional and traumatic parts of her job with cold detachment, Williams begins to fall apart after a botched lethal injection — underscoring the toll taken by years of carrying out death row executions.

Written and directed by Chinonye Chukwu, Clemency explores Williams’ journey as she prepares to execute another inmate, in the process confronting the psychological and emotional demons her job creates. With nods to both the anti-death row activism as well as reasons for why the ultimate punishment is still supported by 29 states in the country, the beauty of Clemency lies in the relationship a warden like Williams has with an inmate scheduled for execution. It’s as if they are both “captives of their worlds, legally, spiritually and morally,” according to a review by The New York Times.

The film has garnered both critical and popular acclaim, winning the U.S. Dramatic Grand Jury Prize for 2019 at the Sundance Film Festival and winning Best Local Feature at the Philadelphia Film Festival. Rotten Tomatoes currently has the film scored at 91% on the Tomatometer, stating that “Clemency mines serious social issues for gripping drama, brought to life by an outstanding cast led by Alfre Woodard.”