What makes a great villain death? Surprise? Gore? A feeling of closure?

A good villain death can pay homage to all that a character brought to a story. It can also just be really well filmed, or involve a satisfying twist of fate.

Disclaimer: Though none of these films or shows are particularly new, this article is full of spoilers. 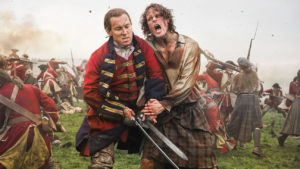 ‘Black Jack’ Randall and Jamie Fraser during the Battle of Culloden in Outlander.

I never hated a fictional character more than I hated “The Swede.” Paradoxically hailing from Norway,  the immigrant-turned-Civil War Union soldier Thor Gunderson wasn’t without a complicated and sad past. Still, his diabolical schemes to make main character Cullen Bohannon’s life miserable throughout the building of the Union Pacific Railroad were so well written and executed that I couldn’t help but hope, after five seasons, that he would see a gruesome end. Fittingly, Bohannon is the one who physically leads The Swede to his trial and hanging. One of the show’s main themes is Bohannon’s ability to find peace, so that fact that he didn’t have to be the one to kill The Swede brought their storyline to a bittersweet but ultimately gratifying conclusion. Plus, the creators took their time with the brutal hanging scene, leaving no doubt — for Bohannon or for long-time fans — that The Swede is finally dead.

It would be irresponsible to write a list such as this without including the death of German terrorist Hans Gruber in the original Die Hard. Gruber’s epic fall from Nakatomi Plaza is made great for a couple of reasons. First, it used the most cutting-edge film technology of 1988 to layer ultra-slow footage of the character falling over more footage of the view below the building — all before CGI was even a thing, meaning the two shots had to be layered with an optical printer. Second, the look on Gruber’s face is one of true fear. Actor Alan Rickman was terrified to fall backwards, and had to do so 20 feet through the air onto a giant pillow. The shot required Rickman’s face — not a stunt double — so he mustered the courage and gifted viewers with one of the most memorable villain deaths of all time.

Black Jack Randall’s evil knew no bounds when it came to the British occupation of Scotland, as he played the main antagonist during the first two installments of the Outlander book and television series. What makes Randall’s death so satisfying is a multi-layered cake of narrative goodness. For one, Jamie Fraser gets to kill him — fitting, considering Randall’s history of sexual violence against him. Second, his death takes place during the Battle of Culloden — the goriest conflict of the Jacobite Rebellion. The men begin dueling amid the chaos, exchanging sword blows until they’re the only ones left standing among a field of dead bodies. Finally, Randall falls into Fraser’s chest, dead, and the two collapse. It’s an emotional end for a clearly disturbed and complicated man, and a good bit of closure for Jamie, whose impetus for joining the rebellion began when Randall flogged him in front of his family.

Loyal Death Eater Bellatrix Lestrange was about as evil as they come, making her sudden and slightly humorous death all the more satisfying. During the Battle of Hogwarts, when Bellatrix cast a spell at young Ginny Weasley, Molly Weasley stepped in, delivering perhaps the most iconic line of the battle: “Not my daughter, you bitch!” Molly remains a mostly motherly figure throughout the series, not often known to join into spats with Voldemort’s followers, but this all changes with Bellatrix. They each exchanged a few spells until Molly petrified and subsequently blew Bellatrix into a million pieces. It’s an abrupt end, but one highlighting the powerful — and sometimes surprising — female characters of the HP series.