Jon Brownell has been teaching Bonner County students to sing for 31 years, but it wasn’t until 2018 that he and his choir won the “sweepstakes” at the Lionel Hampton Jazz Festival. Then, in late February, they did it again, earning the highest honors among 3,600 students from 123 schools, who came to the University of Idaho campus in Moscow from Alaska, Idaho, Montana, Oregon, Washington and British Columbia, Canada. 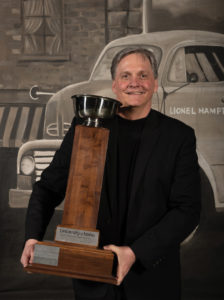 “Two out of the last three years, we have taken the big trophy home,” Brownell told the Reader. “It was a good day.”

Sweepstakes winners are drawn from the top ensembles in each division at the jazz festival, who then perform on the big stage at the Kibbie Dome. As Brownell put it, “judges listen to all the winners and pick the winner of the winner’s concert — that’s the sweepstakes winner.”

Students with the Sandpoint High School Chamber Choir were selected as the AA Senior Area Mic Winners and the Sandpoint Middle School Select Choir was named a Junior Vocal Ensemble Winner — that means both choirs were invited to perform in the Young Artist’s Winners Concert on Feb. 28, and both took the top spots as overall Junior Sweepstakes and High School Vocal Sweepstakes winners, respectively.

“It was gratifying to beat Lake City, Bellevue and other much bigger schools,” Brownell said. “A feather in our cap!”

The SHS Chamber Choir took home a rotating trophy for the year and will receive free entry to the 2021 jazz festival.

“The student performances were a joy to listen to today,” festival manager Josh Skinner wrote in a news release announcing the winners. “Every year the students raise the standard of performance, while at the same time inspire their peers, teachers and the jazz educators who are lucky enough to work with them throughout the week.”

Brownell said the high-school choir turned in an a capella performance of ’70s instrumental hit “Pick Up the Pieces” by the Average White Band and also sang “Take the A-Train” and “The Way You Look Tonight” — the latter piece the group presented in the Kibbie Dome for its sweepstakes win. The middle school choir sang “Summer Time,” “Take the A-Train” and  “Duke’s Place.”

The SHS Concert Choir also performed at the festival but didn’t place — regardless, “they did really well,” Brownell said, underscoring that his students are winners every year, having taken the top spot in the AAA high school and middle school divisions many times.

“In fact, I think we have won them more than we haven’t but not Sweepstakes!” he said. “I’m proud of all of my students.”