Jeff Dunwoody is a celebrated local artist gifted in mediums ranging from painting and drawing to building with wood and metal. But his upcoming show coinciding with the Artwalk is a “unique show, even for me,” he says. 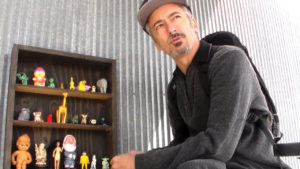 Jeff Dunwoody next to his exhibit. Photo by Jodi Rawson.

“This current show that I am putting in here(Evans Brothers) largely has to do with my mom,” said Dunwoody. “She gave me a lot of the material for this show.”

Dunwoody’s mom was a gifted artist as well as a radio operator in the Navy during the Vietnam War. She passed away in 1998 in the VA in Portland, Ore., leaving a variety of possessions to Dunwoody.

“She saved a bunch of action figures, about three boxes full,” he said. “After she died I sold what I could, but I kept the action figures. Years ago I had this idea — why don’t I do something with them creatively as sort of an ode to mom?”

“People can identify with these (action figures), and hopefully they will say, ‘I remember playing with that,’ but it is really more about the timeline,” added Dunwoody. “I decided to do an action figure timeline: the history of life on earth through action figures.”

The timeline will take the viewer on a journey from plants and animals to advanced human forms in a clockwise journey around the room. “It is a collection, if you will, but it is also art,” Dunwoody said. “When you paint, you have to be very specific about where the color goes and in this show every action figure has to go right in the right spot.”

Both Dunwoody’s mom and grandma had shelves with figurines like glass birds, ceramic creatures and even little Buddhas. Dunwoody’s upcoming show “is kind of based on the thousand Buddha concept.” Hindu scripture refers to a “thousand avatars,” and an avatar is believed to be a material manifestation of deity. Near Arlee, Mont., there is a site designed to be a spiritual pilgrimage in the western world. It has pathways lined with Buddha statues to honor this concept of a thousand avatars.

Dunwoody’s show, while it may have a Buddha or two, is mostly all iconic pop art of the last few decades. “All of the figures will be looking right at you,” said Dunwoody. “The idea is that you will resonate, be reflected in and identify with one of them.”

About 800 of the figures came from the boxes left to Dunwoody by his deceased mom, and the other 200 have stories of their own. Out of the thousand figures there are only about four sets of twins. “I never say, ‘I am missing jellyfish or bears,’ and go out and buy them,” Dunwoody said. “This show sort of came to me, and I put all the pieces together, a giant Sudoku, if you will.”

Dunwoody’s show will hang all month in Evans Brothers, but June 29 kicks off the ArtWalk and his show. He has had countless art events in the Granary District and rented a studio there before it was the Mecca it is today. In his studio (where coffee is now roasted and sold) he threw parties that he DJed, exhibited art and showed movies with seating for around 50. Dunwoody knew the Evans brothers before they were a brand, and he encouraged them not to roast in Ponderay, as they originally planned, but to meet with Steve Holt and John Edwards about the space he rented for three years.

With many years of barista experience, Dunwoody was the one that suggested the Evans serve their coffee brewed. In an interview with the Evans brothers, they were quick to thank Dunwoody, their first employee, with the charge of setting up and working their first espresso/coffee bar, a decision they have never looked back on.

Dunwoody is no longer an employee of Evans, but he did build their new bike rack, drinks coffee there regularly and helps with special events. He is a well-known face around the shop, with friends often dropping by to say hello. With the exception of travel, Dunwoody has been local for 20 years.

Meet Dunwoody and tell him which of the thousand avatars best represents you from 5-7 p.m. June 29. Stay at Evans Brothers for the Artwalk after-party from 7-10 p.m. There will be live music (with Bright Moments jazz), artisanal coffee and local brews.