Crowds gathered in hundreds of separate rallies across the nation to protest the policy toward undocumented immigrations implemented by the Trump administration nearly two months ago, which led to thousands of children being separated from their parents.

Protesters gathered on both sides of First Ave. on Saturday. Photo by Ben Olson.

While the main rally took place in Washington, D.C., over 125 protestors gathered on both sides of First Avenue outside the Bonner County courthouse in Sandpoint. The peaceful protestors held signs and waved American flags, cheering at the passing motorists honking their support.

Signs read “Keep families together,” and “Never again is now.” One lady held a jacket on a stick with the words, “Yes I care” written on the back. Two women held a large American flag with the words, “In our America, all people are equal, love wins, black lives matter, immigrants & refugees are welcome, disabilities are respected, women are in charge of their bodies, people & planet are valued over profit, diversity is celebrated.” 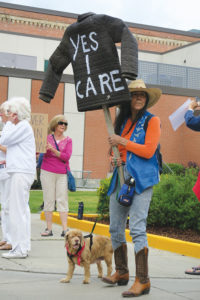 A woman holding a sign that reads, “Yes I care.” Photo by Ben Olson.

A common refrain in the crowd was a call to reunite separated migrant families and the end of the Trump administration’s “zero tolerance” policy.

Dave Mulliner from Sandpoint said he attended the rally because “We don’t believe parents and children – anyone’s children – should be separated from one another. We need to put kids back with their parents.”

Barbara Russell of Bonners Ferry said she attended the rally because separating children from their parents is “cruel and inhumane.”

“I’ve been looking at my grandchildren’s faces and trying to imagine their terror if they were separated from their parents,” she said. “Just think of when a parent can’t find their kid in a store for five minutes, think of the terror they must feel having them taken away and they don’t know where they are or when they’ll see them again.” 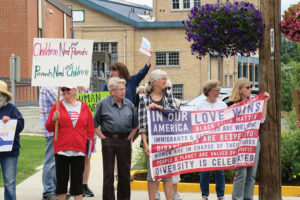 Protesters holding signs at the rally on Saturday. Photo by Ben Olson.

According to the New York Times, more than 2,300 undocumented children have been separated from their parents in the weeks since the “zero tolerance” policy took effect – nearly 70 children per day for the first five weeks of the program. Under this policy, any adult caught crossing the border illegally faced prosecution, with their children separated and sent to federal shelters in various parts of the U.S.

President Donald Trump signed an executive order June 20 effectively reversing the family separation policy, but ten days after that order, there are still more than 2,000 children that have yet to be reunited with their parents. 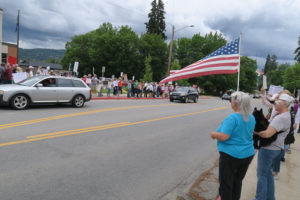 A woman waves an American flag at the immigration protest on Saturday in Sandpoint. Photo by Ben Olson.