Some folks are going on week three of self-isolation and social distancing. There’s only so much Tiger King you can watch on Netflix before you feel your brain start to seep from your ears. So what can we do to keep our minds sharp, stay engaged with our friends and not go crazy with cabin fever?

I know what you’re thinking: obnoxious games that try to force learning down your throat that aren’t really fun – relics from the classrooms of the early 2000s.

That couldn’t be farther from the truth, and I’ll show you why. 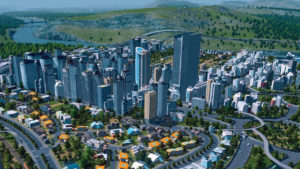 A screenshot from Cities: Skyline.

Here is a list of some titles I’ve sampled specifically for their entertainment value, and learned some stuff along the way. I know most of the area is out of work in the middle of the pandemic, and can’t afford to squander precious funds on entertainment – myself included. So if buying one of these understandably isn’t an option, browse some videos on Youtube about these for free. I’ve linked up with a lot of other gamers and content creators that I admire by perusing their videos on games just like these. Who knows, you might make a new friend across the country – and that’s some great social distance.

Kerbal Space Program is a game about building rockets and launching men into space. The game utilizes real-life orbital physics and atmospheric simulations to provide an experience that’s so authentic, NASA has used it to run exercises. If this sounds completely daunting and overwhelming, don’t worry, Kerbal Space Program is a game at its heart and there is zero ramification for you strapping dozens of rockets to a command module and seeing what happens.

In fact, quirky behavior is encouraged as it will often lead to curiosity. My initial intentional failures (and some accidental successes) led to a desire to push farther, see how much higher I could get my rocket. Eventually, I decided to tackle a moon landing. Sadly, poor Bob Kerman didn’t have enough fuel to make it back home, but he made it to the moon!

Kerbal Space Program is safe to use in a classroom setting and can be used as a powerful tool for teaching kids and adults the basic principles of orbital physics and aeronautics.

Universe Sandbox is exactly what it sounds like: a powerful universe simulation tool. Designed to teach users about how celestial bodies interact in the vacuum of space, it presents intensely complicated science in a way that anyone from fifth grade to adult can understand and appreciate.

The game comes loaded with dozens of premade scenarios like our own solar system – where you can see what would happen if a black hole swallowed our sun – to the collision of the Milky Way and Andromeda galaxies.

My personal favorite experiment in the game is to create very large stars with large solar systems, then trying to create a number of habitable planets and just seeing how the solar system evolves over its life. It’s also fun to see what happens if two planets collide, or if a star reaches its final life stages and goes full supernova.

Often abbreviated by fans as “Civ 6”, this game provides a unique experimental and learning experience best enjoyed by multiple people at once – easy to do while isolated as it comes with online play!

The Civilization franchise has been used by teachers for years ranging in subjects from histories to humanities to social studies. The premise is the players share a world from the viewpoint of a major historical leader, such as Cleopatra. The players then go on to try and win the game under certain victory conditions, be it through global domination, the spread of culture and religion or scientific mastery. The game allows for the creation of dynamic alliances to oppose threats of other players and to mutually bolster scientific or cultural growth.

Many classrooms saw shifts in social dynamics between students playing the game, where students that had been bullied would rally together to form an alliance and beat back the aggressive nation that belonged to the very bully that had been tormenting them in the school halls just moments before.

The game also contains a massive library of historical facts about the leaders, locations, buildings, wonders and units within the game.

Similar to the SimCity franchise from the 1990s, Cities: Skylines is a game about urban development and planning. Utilizing realistic traffic simulations, your city’s efficiency is gauged by its layout and the ease in which your citizens can travel from home to work to play (in addition to your tourists).

One of the most interesting things I’ve found in Cities: Skylines was a map of the Sandpoint/Ponderay/Kootenai area devoid of buildings, developed by a dedicated player online. So if you are griping about the traffic revisions in town, give this map a whirl and see what kind of bustling metropolis you could turn Sandpoint into.

The game even comes with a limited editor so you can design specific buildings to pop up in lots. You could even build the Panida theater and slap it onto an airport if you so desired.

That’s all for now. I have kingdoms to conquer upon my throne of isolation!