An art icon in the making

Sandpoint artist Alison Barrows-Young is celebrating international recognition after the publication ArtTour International recently chose one of her pieces for its back cover. 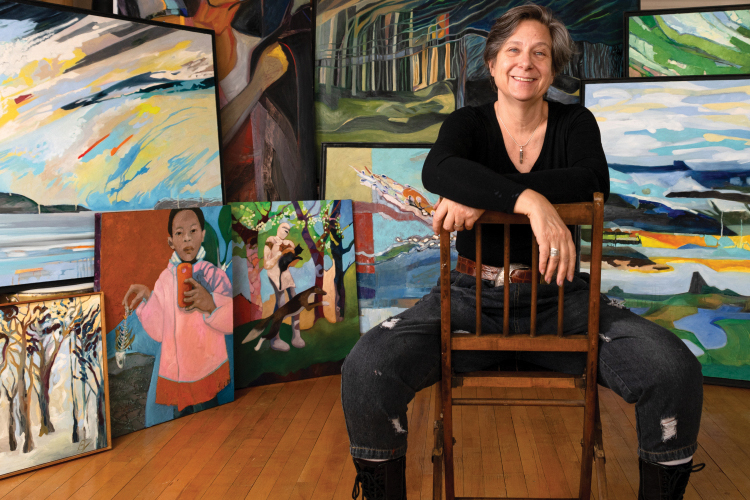 Alison Barrows-Young, (or ALBY as she is also known) sits before some of her paintings. Courtesy photo.

Barrows-Young, also known as ALBY, said she was honored the publication selected her piece, “The Promise of Humanity,” which came with recognition as a “Top 60 Master,” with her work chosen from more than 1,200 submissions.

“I’ve had an entire career from when I first started in the arts, and it’s always been a male-dominated field,” ALBY told the Reader. “After having worked so many years on this, it’s fun to start getting some recognition.”

ALBY executed “The Promise of Humanity” in an icon art format — inspired by her Catholic upbringing — to help shed light on the global refugee crisis.

“I’ve been frustrated in a way by all the women and children who are refugees around the world and the conditions they’re living in,” she said. “I found that these mothers and their children started looking, to me, like the Virgin Mary. I was raised Catholic and don’t practice it, but the imagery of Catholicism has always been appealing to me. The way they show suffering … the light-filled stained glass and small vignettes, lots of dark and light colors.”

ALBY decided she wanted to paint women from different countries with their children, featuring icon-inspired arched doors and windows, as well as halos. In “The Promise of Humanity,” ALBY also tapped into her love of mythology, utilizing a theme of “sacred water” to depict a mother and child.

“Our mythologies teach us right from wrong and many of them defer to nature where we see ourselves among the things in nature,” she said. “I started thinking about the tarot deck of temperance, where the woman is holding two jugs of water and pouring between the two back and forth. It’s a beautiful symbol of our ability to balance our spiritual or magical parts of ourselves to keep things flowing.” 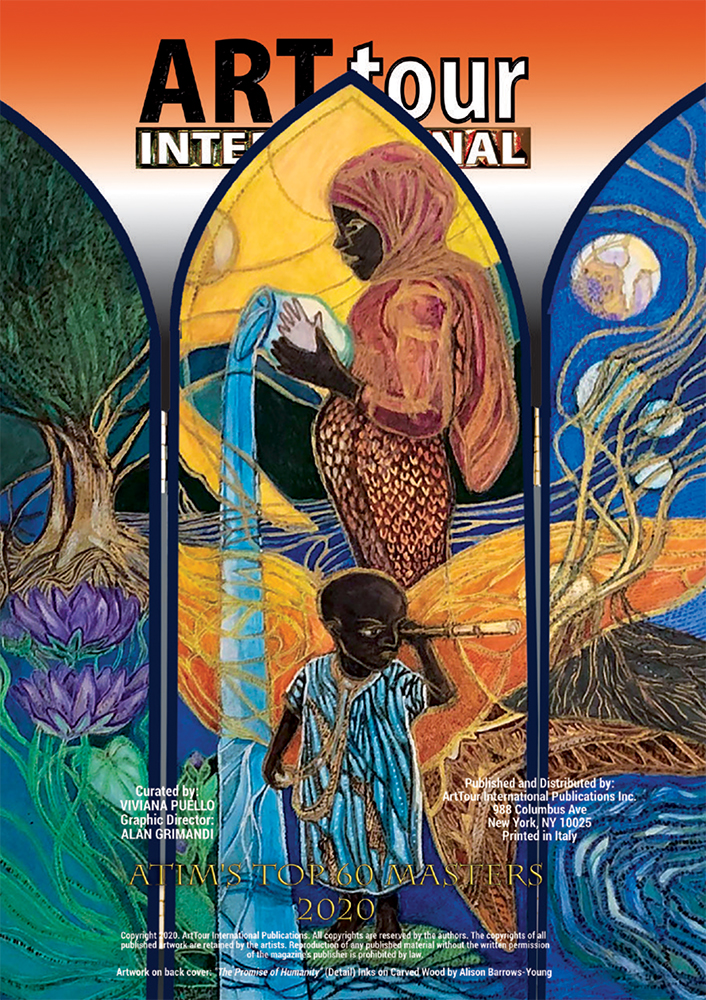 The back cover of ArtTour International with ALBY’s “Promise of Humanity.” Courtesy photo.

ALBY decided to launch on that concept, depicting an African woman with a mermaid-like quality pouring a jug of water with her child beneath her.

“Children are the best of us,” she said. “They start out without prejudices and hate, so I thought it would be neat to do a child who was also an explorer. In one hand he’s holding a spyglass telescope looking out, and then he’s also holding a compass and he has traditional African garb on.”

ArtTour International was founded by Viviana Puello as a publication that spotlights top talent from a variety of artistic forms. It is currently publishing its ninth edition.

“Viviana has a real sparkle and ability to generate interest,” ALBY said. “She and her husband are very lively, very creative, and they’ve generated a lot of interest in the arts.”

Like many artists, ALBY said she’s always experimenting with different media and inspirations. Her portfolio is filled with a diversity of themes, media and styles, both touching on abstract, figurative and elemental work. At the core of her work is the mission to speak to social, environmental and personal concepts fusing naturalistic imagery with eccentric patterns. Her paintings shine with a kaleidoscope of bright tones and soft, earthy contrasts.

ALBY moved to North Idaho about 10 years ago after a long career based in different locales. Originally born in New York City, ALBY moved to Ontario, Canada, where she was raised until she returned to the U.S. to study art. She eventually attended Antioch College in Ohio, obtained a master’s degree in Florida, bounced around a bit from Newark, N.J., then California, eventually settling in Boulder, Colo.

“Boulder is a great place, but there started to be kind of too many people there,” she said. “I used to go to a lot of mountain towns and I thought, ‘It would be really great to live in a small town in the mountains.’”

Thanks to her uncle, who lived in North Idaho but unfortunately passed away before she arrived, ALBY discovered Sandpoint and settled here to continue creating art. Art lovers in her adopted hometown can view her work in ArtTour International, at Eichardt’s Pub and Monarch Mountain Coffee or online at alisonbarrowsyoung.com.