The Sandpoint City Council made a number of big decisions at its Dec. 18 meeting, approving a range of land use policy changes related to the Sandpoint Airport, new rules for sidewalk construction and the artificial turf infill option to replace the natural grass surface at War Memorial Field.

City officials also paid note to this being the final meeting for CouncilmenTom Eddy and Bill Aitken, whose seats will be filled at the next meeting Thursday, Jan. 2 by newcomers Andy Groat and Kate McAlister. City Administrator Jennifer Stapleton also reminded those in attendance that a series of surveys related to master planning and other municipal issues are either already posted or will soon be posted at sandpointidaho.gov/engage.

But the biggest action on Dec. 18 was the Old Business, beginning with the Sandpoint Airport.

The overlay is comprised of three zones: 1,000-foot-long runway protection zones at the immediate ends of the runway, the inner critical zones extending 5,000 feet north and south from the runway, and a 2,000-foot-wide lateral safety zone extending east and west from the runway centerline.

The airport overlay is intended to restrict the height of structures and natural features such as trees, as well as imposes limits on what can be built in close proximity to the airport. According to the ordinance adopted Dec. 18, no rezone requests for any development that would increase population density will be granted within the inner critical and lateral safety zones.

City Planner Aaron Qualls was quick to point out that the prohibition on “up-zoning” to higher-density uses “doesn’t change the existing zoning on the ground — it’s essentially a stopgap measure to not make things any less compatible [in the future]. … The same rights you have to develop today are the same rights you’ll have after its adopted, if it’s adopted.”

Nonetheless, a handful of residents commented in writing that the airport overlay changes amounted to “a major zone change,” and asked that adoption be tabled in order to better inform those whose property is to be covered by the new inner critical and lateral safety zones.

The disclosure statement will be provided to any applicant for conditional use permits, variances, preliminary and final plats, lot line adjustments, planned unit developments or zone changes within those zones, notifying them that their property is subject to the provisions of the overlay and that “they may be exposed to potentially impactive levels of aircraft overflight, including but not limited to noise, vibration, fumes, dust, fuel and fuel particles, and other effects.” Applicants will be required to sign the statement before any permit is awarded.

Only cropland and open space will be allowed in the runway protection zones.

While the target date for the Comp Plan update is September 2020, city officials accelerated adoption of the airport component to be completed this month to open the way for lifting the moratorium on zone changes inside the airport overlay.

The council imposed a moratorium on zone change applications within the airport overlay in July 2019, intended to give the city enough time to review and amend the Comp Plan and its land use regulations related to compatible uses around the airport.

Originally imposed for up to a year, council members repealed the ordinance establishing the moratorium in a unanimous vote. Following the vote, any zone change requests inside the overlay will be subject to the provisions in the new airport chapter.

Changes are coming to the way sidewalks are constructed in all zones throughout Sandpoint, with the intent being to place more responsibility for construction and repair on the city. 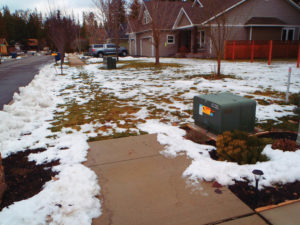 Property owners would also be required to construct sidewalks in the case of an addition or remodel in which what is being constructed is valued at more than 25% of the existing structure — but only if there are existing sidewalks adjacent to the property. Repair or replacement would be required under the same conditions as new construction, or by council order.

According to Public Works Director Amanda Wilson, the new ordinance is intended to place “a fairly substantial amount of responsibility on the city” in order to “achieve a balance.”

Property owners would be exempted from the ordinance in the case of construction related to fire or other casualty loss, and there will be a new option to pay an in lieu fee to be adopted annually by resolution. Wilson said that fee is suggested at $125 per linear foot of frontage and would be paid into the capital improvement fund.

Councilwoman Deb Ruehle cast the sole “nay” vote, raising a number of concerns, including that the city should not be so ready to take on additional responsibility for sidewalks when many of the existing pathways are in disrepair. She also expressed concern that with the city retaining responsibility to build sidewalks across alleyways, those connections might not be made for years on end, depending on the monies available in the capital improvement fund.

Casting her vote, Ruehle said, “I just feel like there’s a little bit more we could work on.”

Finally, after months of heated public discussion, the council unanimously approved the artificial turf option of natural rubber and cork infill to replace the grass surface at War Memorial Field.

Parks and Rec. Director Kim Woodruff pointed out that the “natural rubber” comes from rubber trees and is repurposed from leftover material at a factory in Argentina that makes gaskets.

According to a breakdown of turf options prepared by design contractor Bernardo Wills Architects, the preferred option reduces field temperature up to 10 degrees and, when moist, up to 40 degrees. It carries no special maintenance requirements, cleans with water — though permanent soiling would require removal and replacement of the affected area — and carries a warranty of eight to 12 years. The turf will cost $2.39 per square foot for a total of $348,580, and represents the least-cost alternative of the six options considered.

Among the advantages noted by Bernardo Wills were low maintenance, good drainage and high permeability, high ultraviolet stability, good warranties, no irrigation requirement, natural color, resilience (it will not biodegrade), no weed or mold growth and the turf’s use of natural, renewable, nontoxic materials.

Hatch said the artificial grass itself — referred to as the “carpet” — will be 2 inches in length with 1.5 inches of infill leaving a half-inch of fiber showing. The surface will require a shock pad, as natural turf products have less shock absorption as black rubber turf.

According to the resolution, the design for the field project — which includes the turf, changes to parking, batting cages and bullpens — is slated to be completed by February 2020 with a contract award in March 2020. The $4 million project, to be paid for with the 1% local option tax approved by voters in 2015, is scheduled to be complete by July 31, 2020 — just in time for The Festival at Sandpoint’s annual summer concert series and the late-summer and fall sports seasons.