A walk down Festival Street

A mainstay first stop on Festival Street — the Festival at Sandpoint’s food vendor row — is Evans Brothers Coffee, owned by local brothers Rick and Randy. They source their beans ethically from organic and fair trade farmers and have created a vibrant culture around the magical cup of java. Specials include the nitro cold brew, flavored with chicory and vanilla. The affogato features Panhandle Cone and Coffee’s salted caramel butter ice cream topped with espresso.

Next on the street, New York-style pizza and calzones rule the day at Bab’s, but you can also check out a soft pretzel to satisfy that quick hunger. Bab’s also has gluten-free chocolate cake and New York cheesecake with a cherry topping. C’mon, when isn’t it a good time for pizza?

In the Italian tradition, Arlo’s offers its famous lasagna, usually only available on Sundays at its restaurant at 124 S. Second Ave. Other savory selections are the sausage and peppers or grilled chicken with peppers, both smothered in savory marinara sauce. The cold tortellini salad with a roasted red pepper puree is a great counter to these hot August days. Also available are Caesar salad options, but don’t neglect the coveted Arlo’s cannolis — made with shells flown in special from Queens, N.Y. — for dessert.

Who says you can’t find an authentic Philly cheesesteak in the West? Joe’s does it just right, with thin-sliced beef that’s chopped as it’s grilled. “It’s the best thing you can put in your mouth,” joked owner Lj Sams. Throw in a variety of cheeses, mushrooms and peppers, and a soft yet crispy hoagie roll and you’ve got yourself a winner dinner. They also have sloppy Joes and buffalo chicken with house-made sauce.

New owners Alex and Brittany Jacobson from the Pack River Store bring their homestyle selections to the hungry masses. Their pork belly burrito fuses Southwest flavors with North Idaho wholesomeness. We suggest getting it smothered with their homemade roasted jalapeño and honey sauce. For kids of all ages, there’s the “$50 grilled cheese sandwich” sporting a who’s who of cheeses (it thankfully doesn’t cost that much — it’s $12 or $14 with bacon).

Curry in a Hurry 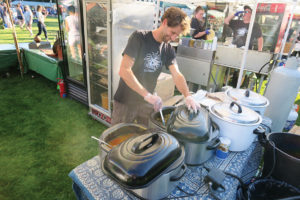 Pete Hicks serves up some Curry in a Hurry at the Festival Thursday night. Photo by Ben Olson.

Sandpoint Curry owner Pete Hicks learned his love of Indian food straight from the source: traveling through India “in a band where none of us knew how to cook,” he said. Hicks brought the curry flavor back to North Idaho, putting together such classic traditional favorites as coconut chicken, chicken tikka masala and saag aloo, which has spinach and potatoes for the vegetarians in the crowd. Don’t forget the garlic naan, which completes this perfect curry adventure.

Dine here and the proceeds will benefit the Independence Ski Racing Team, the only 100% free fully-certified ski team in the country. This team has even put a former student on the U.S. Ski Team, according to director and coach Shep Snow. “Our nachos are the most popular item,” Snow said, noting that they come prepared with guacamole, sour cream, beef and all the fixings. They also serve burgers, polish sausages and hot dogs for easy concert food.

Those looking for an authentic Thai food fix at the Festival can find an array of good eats at May’s Catering. The family-owned Priest River business brings pad thai, curries, cashew chicken, spicy beef basil and beyond, served up in a hefty heap. When it comes to the most popular dish at May’s, chef May Callos said there’s no doubt what Festival patrons crave: “The red curry, definitely. We sell it out every night.”

That delicious scent of barbecued meaty goodness is coming from the Klondyke booth, where Festival-goers can get a filling plate of ribs or even half a chicken. Chef Bruno Williams said he serves more ribs at the Festival than chicken, estimating the ratio at about two-to-one. “I put a dry rub on them the day before, then put them in the cooler,” Williams said of the ribs. “I let them soak overnight, then I cook them five or six hours. I put a lot of time into them.”

Eclectic freshness is what Festival diners will find when they check out Jupiter Jane’s offerings.

Chef Laura Peitz said tacos are what her traveling food bus is known for. “They’re not your traditional street taco,” Peitz said. “They’re really big and very fresh and organic, and just different combinations that not everybody is doing.”

Opa! brings the fresh flavors of Mediterranean cuisine to the Festival’s food lineup. Chef Adia Burton said the gyros and made-from-scratch falafel are the highlights of her menu. “I’ve been cooking it my whole life,” Burton said of Mediterranean eats. “I’m half Greek and I got a lot of recipes from my grandmother. It’s in my blood and it’s what I love to do.”

Ponderay’s Farmhouse Kitchen is known for down-home, hearty fare, and the restaurant’s Festival offerings are no different. Manager Cory Treman said Farmhouse Kitchen’s Festival menu gems are the pulled pork sandwich and brisket sliders. “We smoke them for about 16 hours,” he said. “They always come out tender and really good.”

No Festival meal is complete without a sweet treat to top things off. Thankfully, the Panida Theater is there to fulfill those needs with its annual ice cream parlor. Booth manager Megan White said the berry pie a la mode is undoubtedly the crown jewel of the menu, made with pies from Miller’s Country Store in Sandpoint. “You get a scoop of ice cream on top, and all of the fixings,” White said.