Shakespeare, as he intended

Montana Shakespeare in the Parks came to Heron, Mont., every summer for almost 30 years. Just a few years ago, when the woman in Heron who hosted the plays each summer retired, citizens in the surrounding area were left without a local MSIP performance.

“So no one took over in Heron, and those of us who love Shakespeare and love that whole concept of watching the play outdoors — like it was done in Shakespeare’s time — were waiting for someone in the area to take it over,” said Christine Holbert, current organizer.

So when she decided to take on hosting MSIP through her independent nonprofit publishing house, Lost Horse Press, Holbert called the theater troupe and asked if they’d be willing to come to Sandpoint. 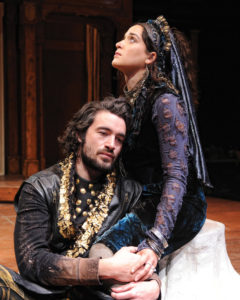 “Macbeth” will be performed on Sunday, Aug. 20 at 6 p.m. at the Bonner County Fairgrounds. Courtesy photo.

“They said, ‘We’ve been waiting for years,’” she said.

MSIP will put on a free performance of “Macbeth” at the Bonner County Fairgrounds Sunday, Aug. 20, at 6 p.m. Gates to the fairgrounds will open at 3 p.m. so attendees can come lay out their blankets and enjoy performances from several local groups before the play.

Holbert said Devotion Tribal Belly Dance of North Idaho will perform, as well as the Music Conservatory of Sandpoint’s Youth Theater Program. The MCS students will perform vignettes from “Hansel and Gretel” and Oscar Wilde’s “An Ideal Husband” as the opening act for “Macbeth.” Those same theater students will also receive a master class from the MSIP actors.

Holbert said it’s tradition for play attendees to come early, picnic and chat with friends before the MSIP performance, and that by having opening acts, the afternoon will be even more memorable.

“It’s just something to spice up the afternoon, and a way to showcase our local talent,” she said.

Holbert said that because Lost Horse Press is a nonprofit she wants to show the community her appreciation for their support.

“I felt it was my responsibility to somehow give back to the community, so our mission is not just to publish poetry books, but also to make literature available in other forms and activities, like hosting Montana Shakespeare in the Parks,” she said.