SPR: What genre of music would you say most closely represents Still Tipsy and the Hangovers?
Brian Grise: It’s kind of hard to put a finger on that because we work with a few different elements, and sometimes one shines more than others. But for the most part we play swing music. There’s also a mixture of ‘20s/‘30s jazz and ‘40s/‘50s rock-a-billy. Some people have used the term jazz-a-billy to describe us … so yeah, we’re basically a bunch of hillbillies playing jazz music. 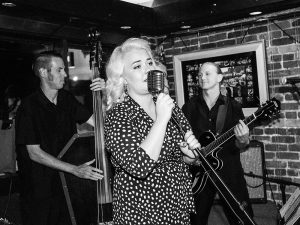 SPR: Is the band working on any projects?
Grise: We’ve got a couple new songs in the works and are even thinking about adopting some songs from our previous band, Not Quite Punk. We’ve only been together for six months, so for the most part we’re working on the business side of things such as T-shirts and a press kit … We’re definitely wanting to play more gigs out of town.

SPR: Favorite musical and non-musical influences?
Grise: Probably my biggest influence I’ve ever had is Django Reinhardt … I think he started playing professionally when he was 12 in 1922 or something. His family were traveling Gypsies, and that’s all they did is travel around and play music. He was the first guy I ever heard that I was like, ‘What … is that?’ I’d also have to say The Misfits, Rancid and The Cramps”

SPR: Can you give me some history on how the band came to be?
Grise: It’s really interesting how I met Reese Warren, our guitar player, who is now one of my best friends. One of my favorite things to do ever since I was a little kid was to take in the sun, lean against a tree and practice my guitar … No matter how I’m feeling beforehand I always feel better after.

In 2003, he was actually my next-door neighbor, but I didn’t know him yet … there was a patch of grass and some trees outside our building … one day I go out to play and there’s this ginger sitting against a tree playing his guitar … I stopped and listened for awhile and I realized he was playing this Django Reinhardt song! So I sat down on the other side of the tree from him and started playing along and we probably played for over an hour together without saying anything to each other. Finally I was like, “Hey man you wanna go drink some whiskey?” and he was like, “Hell yeah!” and we’ve never stopped jamming since.

Nowadays I call him freckle dick. Meg and I were bar acquaintances for a long time and eventually became roommates. One day we came home a bit drunk, and she started singing Patsy Kline, and I said to her, “You know I can play these songs for you on guitar right?” From then on out it became a thing. We’d get drunk and she’d say “Get out your guitar! I’m singing Patsy Kline.”

SPR: What kind of cover songs do you normally play?
Meg Turner: A little bit of everything, The Speakeasies, Liquid Paradise all the way to the “Addams Family” theme song, which everyone really gets into and snaps along.

Grise: Meg’s a little more on the pop side…she tries to get us to play Britney Spears sometimes, which is fine with me because we’ve done a couple of those and they always turn out really good…they’re always fun. People know it, but we play it with our jazz-a-billy style …We hit the chorus and you see they whole bar turn to us like, WTF!

SPR: What’s your outlook on the record industry in today’s world?
Grise: I think at one point it was a really good thing, and then it became this big ugly monster that just took advantage of everything. Everything’s been flipped on its ear in the last 10 years or so … but now it’s even more noticeable. Nowadays you have to have some serious weight for them to even look at you, and if you do already then what’s the point.”

SPR: What’s the best and worst part of working clubs/bars?
Grise: We’ve actually played a couple of shows that went south, like when our bar tab is actually more than what they were paying us to play, even though it was really implied that they would cover our drinks in the first place. What do you call that? Not dine-n-ditch. Maybe gig-n-go. I personally like playing dive-bars because people tend to get a little more into it … we always have a great time playing at Roxy’s, 219 and A&Ps.

Check out Still Tipsy and the Hangovers play at the 219 next Friday, Sept. 9.