The student of a legend:

When I picture Ansel Adams, I think of a truly independent photographer.

His work covering national parks led him to some of the remote areas of the country by himself, so it’s hard to imagine him as a teacher in a classroom environment. But that’s exactly how Charles Phillips, one of roughly 50 students at the 10-day Adams Yosemite Workshop in 1972, encountered him.

During their first meeting  at a cocktail party behind the Ansel Adams Gallery in Yosemite, Phillips, then 19, asked the 70-year-old Adams, “If you were my age, but knew everything you know now, how would you become a full-time landscape photographer?”

Adams shook his head, looked up at the sky and simply walked away.

Perhaps it was an inappropriate question for a cocktail party, but Phillips also recalls that “when you read his biographies, he was having a tough time doing it himself, and he was 70 years old.” 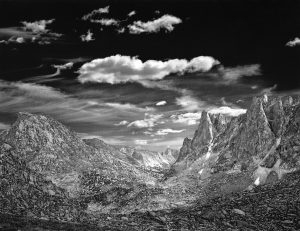 According to Phillips, this was an anomaly compared to his future experiences with Adams.

“Under classroom situations, he was very patient,” he said. “He was easy to work with but had very limited time with you. He was a guy that everybody wanted to spend time with, so you had to absorb every little second of it.”

“He was very jovial, but had a terrible sense of humor—I mean, horrible—but he liked to tell jokes,” Phllips continued. “He’d read an absolutely horrible joke, and you couldn’t help but laugh—not at the joke, because it was stupid—but at the way he presented it. Then he’d walk out. He was just funny that way.”

Phillips was born in 1952 and received his first camera when he was 8 years old. After his father’s passing when he was 13, he inherited his first SLR camera and never looked back. He realized he wanted to be a scenic photographer in college and knew he had to pursue his passion. He left college early, outfitting a 1948 Willys Jeep to handle all photographic capabilities. That Jeep became his home, transporting him as a photographer all the way to his meeting with Ansel Adams.

Phillips is known for creating hyper-detailed imagery on a massive scale. In order to achieve these resolution-defying results, he utilizes various aerial photography and graphic arts tactics from the moment the shutter clicks to the process of making a beautiful print.

During the printing process, he implements masking techniques by printing in zones to truly bring out the best from his eight-inch by 10-inch negatives, which have detail way beyond what the human eye sees.

“I would develop an optical mask-filming scenario, which controls the light/dark interface within two thousandths of an inch,” Phillips said of his printing technique. “Then I would expose each compositional element independent of the other, each for its own optimum contrast.” 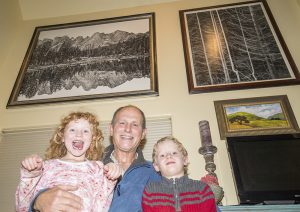 Anya, Charles and Aiden Phillips at their family home in Sagle. Photo by Cameron Barnes

“Once I got control of each area, which took anywhere from two to five weeks of printing out a single image, I could adjust the relationship between the different compositional elements,” Phillips added. “[This] would produce this incredible sense of depth, of space, and as the prints got larger, they got sharper, visually.”

Phillips’ technique breaks the image up into essentially three separate photographs, which can then each be perfected independently without having to sacrifice quality when exposing together. Through this meticulousness, he is battling the age-old struggle of photography:  retaining the full clarity of a negative.

When Phillips proposed his new image-making method, Adams told him that “masking techniques in aerial mapping photography would give a photographer added creative control, but they were too expensive and too time-consuming.”

At 19 years old, Phillips wasn’t scared off by the idea of something being too time-consuming. His passion led him to not only attempt but perfect this method.

“I dived right in and researched it,” he said. “It took me quite a few years to learn how to make a living with it, but I eventually did. At 31 years of age, I started making a full-time living at it.”

Wyoming, the subject of many of Phillips’ standout works, has always been a pivotal part of his life. It’s also where he won a best of show at an Art Association’s Summer Show in Jackson, much to the delight of admirer Maia Leisz. The two connected at the event and were married two years later, eventually moving to Libby, Mont.

After closing Phillips’ photo business in Kansas, the couple began construction of their new sanctuary in North Idaho. They now operate Bella Vita Studios together from their home in Sagle.

Although they are both artists, they couldn’t be farther apart in their approach. Leisz is not only an oil painter, but has done fantastic mixed media work. Much as Monet had his water lilies, Leisz adopted red poppies as her primary motif. At the Farmers’ Market, she has also recently showcased one of her new projects: unique tie-dye clothing. Their children, Aiden and Anya, also get involved, creating magnets sold right alongside their mom’s work.

As for Phillips, he is focused on printing from his prior works for collectors, some of which include Warner Bros., Mobil Oil, Smith Barney, ABC News, Briggs and Stratton, NBC News, Goldman Sachs, Tektronix, Rothschild’s and JP Morgan.

“I guess I am about the luckiest guy alive!” said Phillips. “I make my living doing the two things I most love to do: experiencing the extraordinary beauty of the wilderness and expressing its powerful forces through my photography.”

To view a portfolio of his work, go to www.behance.net/charlesphillips