The Scenic Pend Oreille River Train, or SPORT, is offering June rides in addition to their regular fall color routes held in September and October. In conjunction with the popular Newport Rodeo, the SPORT will run special routes Saturday and Sunday, June 22 and 23, with departures at 1 and 3 p.m. each day. 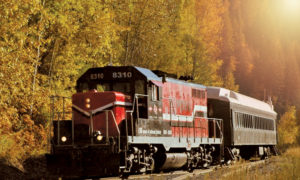 The train, owned and operated by Newport/Priest River Rotary Club the past three seasons, is the same historic train the North Pend Oreille Valley Lions Club operated for 35 years. It’s a pleasant 15-mile ride from Newport to the historic whistle-stop at Delkena, where a sawmill once operated. All in all, the trip takes under 90 minutes.

“We’ve got seven cars altogether,” said upcoming Rotary president Ken Schueman. “There are three open cars and three enclosed cars, just like the old-fashioned railroad cars we rode in many years ago. Then there is also a caboose. The kids love the caboose because you can actually ride up in the cupola.”

Schueman said the train dates back before World War II, with 1920s and 1930s era cars giving the ride a truly historic feel.

The route follows the old railroad north from Newport to Delkena, tracing the footsteps of the Native Americans and later early French couriers d’bois who made their way north during the Klondike gold rush. Keep an eye out for the descendants of the nefarious train robbing Dalkena Wild Bunch Gang, also!

“We have someone that talks about the area on the ride,” said Schueman. “We try to point out some of the features along the way.” 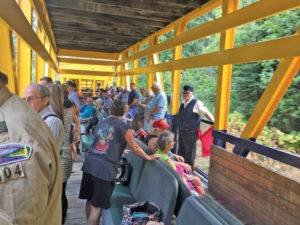 A view from inside one of the historic open seating train cars. Photo courtesy Newport/Priest River Rotary.

One fun activity for kids of all ages is a wildlife viewing card, which alerts kids to look out for particular species and gives a checklist to check off what they see along the way. Wildlife seen along the route includes river birds, eagles, deer, moose and much more.

“We’ve not seen a bigfoot yet, but we’re still hoping,” Schueman joked.

“I believe in the Rotary principles of honesty and integrity in everything you do,” Schueman said. “That’s the base for all the charitable work we do.”