On being a veteran

VJ day was my second birthday. World War Two had ended. The evil Japanese Empire, Italian Fascists and German Nazis were defeated. Every Fourth of July, Flag Day (now Memorial Day) and Veterans Day, huge parades with booming bass drums honored all the veterans as they marched down Broadway, the wide main street in the small town of Sonoma, California, where I grew up. To me every GI who had served was a hero, regardless of what he did to support the war effort. 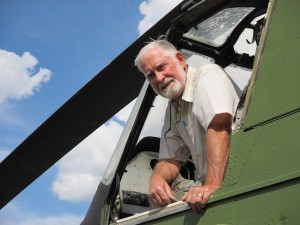 Vietnam veteran Bill Collier poses in his derelict H-34 helicopter, the same model he flew in the war – and the subject of his new book. Photo by Carla Keefer.

My father served in the Naval Reserve at the tail end of the war, and my big brother, Cal, had done his tour in the cold war Air Force. I wanted to serve my country, too. In 1964 I was recruited to become a helicopter pilot for the USMC. In 1965, as I neared then end of my Navy flight training in Pensacola, the Vietnam War officially began. “Great.” we all thought. “We are going to have our own war and be heroes like our fathers!”

We may not have had much welcome from our fellow Americans, but we all bonded with each other. To me the greatest thing about serving was my fellow GI. Not just Marines, but anybody who served in any capacity in any service. Each of us gave the blank check for our lives to the government for a specific period. In return, we shared experiences that made us laugh, cry, and cringe. All another veteran has to say is where he served, and I have a pretty good idea of what he went through. Perhaps that is why when we get together and tell stories, we focus on the fun times, the good times. We do not want to stir up the bad memories.

My best friends to this day are the fellows I served with in Vietnam. When I married for the second time in 2003 my best man was my good friend and fellow Marine helicopter pilot, Lt.Col. James Barr. Even though he lives near Dallas, Texas, we still get together frequently. We end our phone calls with, “I love you.”

I am a member of almost every veteran’s organization in town. We help veterans in need. We provide firewood to veterans; help them with car repairs, propane gas refills, grocery money, septic tank servicing and a myriad of other support. We even bought a good used car for one female veteran whose car had died, and she might lose her job if she could not commute to work. We have garage sales and other events to raise money to further these causes. If you would like to donate to an organization that has zero overhead and spends your money close to home, please consider contributing to one of the local veterans groups. 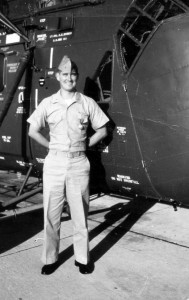 Right: A photo of Cpt. Bill Collier during his service. He said “After I had been ‘in country’ for a few weeks, the squadron had
an award ceremony. I was awarded my first air medal. I was to earn 22 more.”

Every year our local Marine Corps League Detachment #1110 celebrates the birthday of the Marine Corps by having a luncheon. This year it is happening Saturday the 14th of November at noon at Tango restaurant. All Marines and members of all other services are invited, too. If you have not already made reservations, Please call League coordinator Hal Covill at  (406) 847-1975. so we can inform the caterer. Cost is $25 per. Any profit we make goes into the kitty to help veterans in need. Call TODAY to be included.

Captain Bill Collier has written a book about his experience as a Marine Corps helicopter pilot in Vietnam. “The Adventures of a Helicopter Pilot, Flying the H-34 in Vietnam for the USMC.” It is available at local book stores, Fiddlin’ Red’s music store on Church Street and Sandpoint Super Drug. Or order online at amazon.com.