For whom the Twin Towers tolled

Edmunds Triplett Jr. strode snappily down Hamilton Road from his rambling brick rancher in Ridgewood Heights. Sometimes, with a late start, Maggie drove him to the station to catch the 7:22. But today, September 11, was his 40th birthday. The morning was bright and crisp. He’d do himself a favor. A brisk, half-mile hike to the train.  Giant desiduous oaks and maples in this leafy, coveted  community had decorated the narrow, winding neighborhood roads  in rust, red, yellow and orange. A collector of old pop recordings, Ed  hummed contentedly as he hiked.”…it’s a long, long time, from May to December…but the days grow short,  as you each September…”.  Henry Wilcox, a  Cantor Fitzgerald investment banker colleague, bounded out the front door of his Georgian manse as Ed crossed Sunset Drive. “Saw you comiin’ through the kitchen window,” drawled Henry, a Texas transplant and financial wizard.  Heading down the hill toward the station,  they debated over the name and lyrics to that other great September song.”…the leaves of brown came tumbling down, remember, in September, in the rain…”. Followed by a few questionable bars from Autumn In New York. It was a singing sort of day. Even for non-singers. 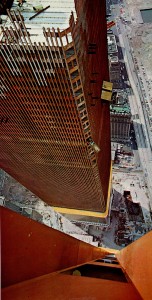 The World Trade Center towers under construction. Tim Henney had to sit on the photographer’s feet while he hung out the window and snapped this shot. Photo by Bill Shropp.

A perfect fall morning in New Jersey. They agreed that few states received more kidding from the media than theirs. Yet they, seasoned corporate travelers, thought none to be so gorgeous. Ho-Ho-Kus, Short Hills, Summit, Saddle River, Franklin Lakes, Ridgewood. They felt fortunate.  So did every NYC investment banker, lawyer, publisher, Wall Street Journal staffer and corporate exec who could afford Connecticut or Scarsdale. But chose New Jersey. To such achievers the high acceptance rate into Ivy colleges from Ridgewood High made the cost of living here worth it. The discussion segued, as always, into Ivy League football. Especially as played at Dartmouth, Ed’s alma mater. At Texas A & M Henry had once been among the original, legendary “12th man” students. Ready to take the place of an injured aggie player, should the coach call. “We need to play each other,” Henry chided. “We’d use our cheerleaders against your varsity. And whup ya.”

The 7:22 express slipped into the station. Ed, Henry,  their fellow fathers and a smattering of well-dressed women  boarded. Settled into seats, they opened leather briefcases.  The WSJ, The Times, Forbes, piles of reports spilled out. “Aren’t you, Maggie and the girls about due to head west? Henry inquired. “Monday,” Ed replied, “two  weeks in Montana. Many Glacier Lodge. Where Maggie and I met. She was wait staff and sang for guests at night. I drove a red bus on Going-To-The-Sun Road.”  “Grizzly bears,” grumbled Henry. “I’d love to see one, show the kids,” said Ed. “Nothing even slightly scary ever happens in our cloistered  life. I guess I’m glad for that. But we could  use some excitement.  Grizzly bears would be great,” he said.

Henry folded his Times into a vertical half page, protocol for  crowded commuter trains.  “My old outfit’s on page one” said Henry. “Chickens  coming home to roost at Enron. Ol’ Kenny Boy made zillions. Now he’s gonna go to jail. Fastow and Skilling too. The SEC’s got ‘em.”  “Did you call your boss ‘Kenny Boy’ when you worked for him?” Ed asked, with an elbow nudge.  “No sir,” Henry answered, “but his good buddy George W. Bush does.” Ed said, “Presidents get called a lot of shit themselves.  Molly Ivins  calls Bush Twig in her columns.” “She calls him Shrub, not Twig,” Henry corrected. “Makes him mad as hell. Wants to be somebody. But daddy’s done everything for him. Yale. Harvard business. The baseball team. The Presidency. So Molly calls him Shrub.”

The 7:22 express pulled into Hoboken, hard by the Hudson. There they stepped aboard the “tube” train. Shuttled swiftly under the river, they got off in downtown NYC. The WTC basement, seven stories beneath the looming twin towers. Maggie and the  girls — Martha, nine, and Mandi, six, would be in around noon for a celebratory lunch at Windows On The World, 105 stories high in the sky. The girls loved coming to the office. Especially on the train. So did Maggie.  Reared on an Idaho cattle ranch, she had gone east to college at Wellsley. Yet New York City never ceased to excite her. The second she crossed the Hudson she reverted to a wide-eyed country bumpkin.

Ed rode the elevator up, up, up toward Cantor Fizgerald LLP offices on the 102nd floor, North Tower. He chuckled. The elevator ride brought to mind a local joke making the rounds. Two guys are at a window table enjoying dinner and the spectacular view of the city from Windows On The World. A waiter brings drinks.  He says, “A long way down, isn’t it.” Diner A replies, “Not if you jump out right here. The updraft blows you right back in.” “Right,” guffawed the waiter.  Whereupon diner A opens the window and leaps out. Within seconds he flies back in. The waiter says “Oh, My God! “ and eagerly jumps out the window. Diner B says to Diner A, “You are one mean son of a bitch, Superman.”

On the 10lst floor the strategic planning committee Ed chaired was meeting. At 8:46 the room exploded. American Airlines flight 11, a Boeing 767 carrying 20,000 gallons of jet fuel,   had hit the tower’s 80th floor.  Aboard were 92 people, including  crew and five hijackers. Eighteen minutes later United flight 175, also a Boeing 767 out of Boston and full of fuel, rammed  the 60th floor of the South Tower. Sixty four were aboard, including crew and five hijackers. Half an hour later American flight 77, a Boeing 757 out of Washington, D.C. with 64 persons onboard including crew and five hijackers, crashed into the Pentagon. A hundred and twenty five military and civilians perished inside the building. Twenty six minutes later another 757, United flight 93 from Newark, plunged to the ground in rural Pennsylvania. Seven crew, 33 passengers and four hijackers died.

Discounting the 19 terrorist  hijackers, each of whom anticipated 72 virgins as a reward for martyrdom, 246 people died on the planes. From the attacks on the twin towers and surrounding buildings, 2,606 died. Death claimed 415 fire fighters and law enforcement officers. In the North Tower 1,355 people above the point of impact were trapped. About 200 fell or jumped from the tower to escape smoke and flames. The attacks killed more than 3000 in all. Some 10,000 more were injured or maimed.

Many lived in Ridgewood, New Jersey.

Edmonds Triplett Jr. chose jumping to incineration. At home, Maggie Triplett and the girls prepared to drive to the train station. Maggie reached to switch off the TV. It showed people falling from high in the exploding North Tower. She screamed.

In the late 1960’s and early 1970’s the author was editor of The Bell Telephone Magazine at AT & T headquarters. It was across the street from the future World Trade Center site. He wrote about 16 acres of “old New York” as they were razed and the twin towers rose. During the 1970’s and early 80’s he attended numerous corporate events at Windows On The World on the North Tower’s 105th floor. From 1976 to 1986, when he retired, the author was a member of AT & T’s Office Of The Chairman. During that period he and his family lived in Ridgewood, New Jersey