Editor’s Note: These profiles are part of our weekly election coverage leading up to the primaries in May. This week, we feature a conversation with gubernatorial candidate Lt. Gov. Brad Little.

SPR: Tell me about your experiences in ranching and business that would make you a good candidate for Idaho Governor. 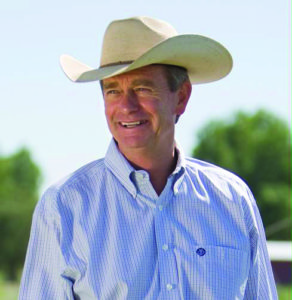 BRAD LITTLE: I have lived the Idaho values of hard work, family, and faith.  I can best represent the aspirations of Idahoans.

In working the land and representing the cattle and sheep industries at the state and national levels, I have traveled across Idaho and seen incredible changes over the years.

Teresa and I come from rural Idaho, where the largest employer— our local sawmill— shut down about 15 years ago.  That sawmill has since reopened, but is more technologically advanced and has fewer employees.  This challenge is happening across Idaho, in every industry.

One saying from my ranching days is “change is inevitable, adaptation and survival are optional.”  Idaho requires statewide leadership that has solutions on these challenges to ensure Idaho remains the premier place to live, work, and raise a family.

SPR: You have served as Idaho’s lieutenant governor since 2009, and before that you served as a state senator from District 11. How have these experiences prepared you for this gubernatorial race?

BL: I have a long track record of bringing stakeholders together to tackle big problems. I think my time as lieutenant governor has given me a perspective on what the Idahoans expect of their governor. Idaho is a diverse state and governors make dozens of decisions each day.  You have to instinctively understand Idaho and the best interests of Idahoans in every corner of the state.

SPR:Idaho was recognized as the fastest-growing state in the nation last month. What ideas and methods do you have to plan for — and increase — this growth in a healthy way?

BL: As lieutenant governor, one of my priorities has been economic development. I have learned what works and what doesn’t in this arena.  I became lieutenant governor in 2009, at the height of the economic downturn, when unemployment reached close to 10 percent. Since then, 100,000 jobs have been created, and Idaho has historic employment, and our wages are growing twice as fast as the national average.

For every corner of Idaho to prosper, we need leadership on economic development and education which works to diversify our economy and add value to existing industries. Here in Sandpoint, there are several economic successes that have shown this diversification, including a burgeoning aerospace sector and several homegrown companies.  Just last week, Litehouse Foods, a great homegrown company, celebrated their latest expansion of their facilities here in Sandpoint.

For every corner of Idaho to prosper, we need leadership on economic development and education which works to diversify our economy and add value to existing industries.

SPR: Your family has a long history of ranching in Idaho, both with sheepherding and later cattle. Incidents such as the “Sage Brush Rebellion” involving the the Bundys disputing the federal government’s ownership of grazing land have put land use and management at the forefront of politics in the Northwest. Where do you stand on this issue? Do you take issue with the federal government owning land in the state of Idaho?

BL: I have a long history, as a cattle and sheep industry representative, of working on these public lands issues. In my younger days, I myself was a sage brush rebel, in the late 1970s. In 2000, as a rancher I joined a group to sue the Clinton Administration on their federally-mandated Roadless Rule for Idaho, which would have locked up a lot of land, including for recreationists. We won that lawsuit, giving Idaho the opportunity to write its own Roadless Rule in 2006. This was the first of its kind, and took into account the concerns of local communities and stakeholders.

Local communities across Idaho should have more say in the day-to-day management of public lands in our state. Idaho must do all it can to work constructively on these issues and find solutions. I think all interested parties welcome a collaborative approach, and Idaho has several examples of these successes— from Good Neighbor Authority to Rangeland Fire Protection Associations.

BL: I have a long history of being active in Idaho Republican politics that started when I was 10 years old at my first Idaho GOP convention— from the grassroots as a precinct committeeman, to volunteering within Idaho on statewide and presidential elections.  I am proud of this record and believe I can use this to lead our party, emphasizing our common conservative values.

SPR: There are those that believe President Trump’s influence on the Republican brand will have either a positive or negative effect on those running as Republicans in the 2018 election. Does this factor into your running platform?

BL: I’m running as an Idahoan to serve Idahoans. I did support President Trump in 2016. My platform is built on creating more opportunities for our children and grandchildren, while keeping Idaho the best place in the country to live and raise a family.

SPR: There is a current push to expand the Medicaid gap in Idaho. Have you followed these efforts? What are your thoughts on this?

BL: Yes. The fact is “no action solution” is not an option.  We waited for the Congress and President to follow through with their promise to repeal and replace.  They failed. Idahoans cannot wait.  Thousands of families have seen their premiums increase astronomically. Therefore, it is up to the state to act and we are doing so.

Last month, I joined Gov. Otter in signing an executive order laying the groundwork for more affordable health care options for individuals and families who have been priced out of health insurance.  In addition to this executive order, the Legislature and governor are considering additional proposals to help Idahoans in the gap.

SPR: Education continues to be an important issue in Idaho. Our state is usually ranked either last or next to last in the amount of money the state spends on education. Why is that? What are your ideas for improving education in Idaho?

BL: In the past four years, Idaho has invested an additional third of a billion dollars in education. For the first time in decades, Idaho had a five-year strategic plan for education, which brought together education stakeholders, including parents, teachers and administrators, and industry.

Just a few weeks ago, I visited the Clark Fork, Lake Pend Orielle and Sandpoint High Schools. I saw firsthand the incredible work your teaching professionals are doing in the classrooms of Bonner County.

One area Idaho has work to do is blurring the lines between K-12, career-technical education, community colleges and universities. As I mentioned, Idaho’s economy is integrating more technology, and new jobs require greater skills and educational attainment from our citizens. This will be my focus when I am governor.

SPR: Among your platforms are efforts to reduce taxes and limiting government in Idaho. Why are these important issues for the average Idaho constituent?

BL: Idaho has the fastest-growing economy in America, and that is due to hard work of Idahoans across the state.  As Idaho revenues pour into our general fund, surpassing our projections and allowing us to make investments in priorities like education, it is the right thing to provide tax relief to each and every Idahoan.

SPR: Complete this sentence: “Brad Little should be governor of Idaho because…”

BL: I am running for governor because I want all Idahoans to have the opportunity to remain in Idaho, or those who left to return. We must stop exporting our most precious resource, our children.  The best way to do that is firstly to create great jobs here in Idaho, and secondly to stand up for Idaho values and our unparalleled way of life.

SPR: Anything you’d like to add that we haven’t covered?

BL: To tackle the future challenges on issues like education, infrastructure and information security, we must step up our efforts to build a more skilled workforce, reward innovation in achieving our goals and hold government more accountable. That includes keeping taxes fair, simple, predictable and competitive, while keeping regulations minimal, reasonable and responsible.