A mountain of uncertainty in the Cabinets

Past legal wrangling is prologue in proposed Hecla mining operation

Waiting under the Cabinet Mountains is a potentially massive reserve of silver and copper. 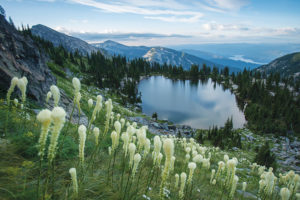 It’s an enticing bounty that mining companies have eyed for decades. There’s just one problem: Those reserves are predicted to be located beneath the Cabinet Mountains Wilderness. And in the eyes of conservation groups like Washington, D.C.-based EarthWorks, mining and wilderness simply don’t mix.

“[Our plans] are designed to accomplish what 80% of the people who live here have indicated: that we can have both an economically valuable mining project and a protected environment,” he said.

A public comment period is now under way on a U.S. Forest Service environmental impact statement over a proposed exploratory project on Hecla’s Montanore project near Noxon, Mont. It’s the latest battleground in a war that reaches back decades.

According to conservation organization Rock Creek Alliance, the Cabinet Mountains ore body was discovered by Bear Creek Minerals in 1963. From the beginning, the ore deposit was politically fraught. It was a significant point of debate in the drafting of the 1964 Wilderness Act, and a resulting compromise grandfathered mining claims into the first 10 wilderness areas established by the legislation — the Cabinet Mountains Wilderness included.

First, proposed mines at Rock Creek and Montanore would tunnel into the Cabinets to access ore reserves, Gestring said, requiring groundwater to be pumped for the project. The upshot is water that would otherwise feed local streams would be redirected, potentially impacting bull trout habitats.

Second, mining operations would discharge wastewater into regional waterways. The Rock Creek Mine is proposed to discharge into the Clark Fork River — which would travel downstream into North Idaho waterways — while Montanore Mine would discharge into Libby Creek. Critics claim pollutants would degrade water quality, affecting fisheries and human populations alike.

Finally, beyond the affected water habitats, Gestring said mining activity would threaten one of the few remaining grizzly habitats in the lower 48 states.

“This is really critical to a population that is already just hanging on by a thread,” Gestring said.

But Russell says all this debate is premature — after all, the only projects on the table are exploratory efforts. A three- to five-year effort on its own, exploration will furnish the geological and hydrological data to determine whether a mining operation is viable in the first place. Should Hecla decide to move forward, a separate permitting process will begin focused on the mines themselves.

There’s also a good economic reason for American-based mineral mining, he added. Silver and copper are both important materials in solar and wind energy technology, but the United States imports 60% of its copper and 30% of its silver — mostly from China.

For all that, Hecla has had a difficult time getting the project moving. Last year, a Montana judge blocked a water quality permit connected to exploration projects.

The company also faces challenges connected to its CEO, Phillips Baker Jr. Previously an executive for the now-bankrupt Pegasus Gold, Baker was involved with a mining project that left Montana saddled with a $30 million cleanup bill. The Montana Department of Environmental Quality alleges that the state must be compensated before any mining project connected to Baker moves forward.

According to Russell, Hecla is confident that the matter will eventually be resolved in its favor.

“When we get to arguments on the merits, we feel that the company and CEO will be exonerated,” he said.

The only certainty about the mining projects in the Cabinetsis that they’ll be tied up in court for the foreseeable future. Both sides are entrenched. Hecla insists that recent court rulings shouldn’t keep them from moving forward on exploration and conservation groups remain committed to fighting that claim.

“I really think it’s important for the mining industry to recognize that there are simply some places where mining shouldn’t occur,” said Gestring.

The U.S. Forest Service public comment period on the Montanore exploration draft EIS is open until Thursday, Aug. 8. Visitfs.usda.gov/projects/kootenai/landmanagement/projects to view documentation on the project. Email [email protected] to submit an electronic comment.