Litehouse’s production facility on Ella Avenue is about to get a lot bigger, and it’s bringing new jobs along with it.

Company officials announced this week that it will break ground on a $6.2 million expansion to its Ella facility, the largest of its three production centers. One of the largest employers in the region, Litehouse is partnering with Bonner County on a tax deferment plan that will help accelerate the process. According to Bonner County commissioners, the agreement offers mutual benefit to private and public interests. 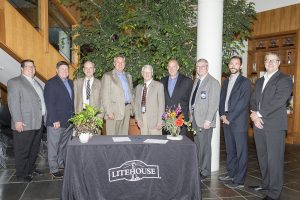 “[At the county], we spend a lot of time and effort looking for ways we can promote economic stimulation,” said Commissioner Cary Kelly.

The expansion will provide the Ella location with a new cooler, shipping and receiving center, loading docks and a wastewater treatment facility. It represents a major expansion for Litehouse’s ability to produce the dressings, fruit dips and veggie dips that have earned renown across the country. It also demonstrates a commitment to keeping the business located in North Idaho, where it was founded more than 50 years ago.

“Sandpoint is the home of Litehouse,” said company president and CEO Jim Frank. “It’s the home of  hundreds of [Litehouse] families. We love it here and we have no intention to go anywhere else.”

The expansion is made more affordable for the company by the agreement with Bonner County. Signed Tuesday afternoon in a ceremony between company and county officials, the agreement places a five-year deferment on additional tax obligations for a portion of the building and equipment investment dollars.

“We are incredibly grateful for the support of Bonner County and its commitment to Litehouse as we continue to grow and provide more jobs for our community,” Frank said in a press release. “Our employee-owners value living and working in this remarkable area and we are all dedicated to continued success, economic growth and future opportunity in our greater Sandpoint community.”

According to Bonner County Commissioner Glen Bailey, the deferment is backed by a common state policy to provide assistance for businesses investing new infrastructure and jobs into a community. Ultimately, the deal will help Litehouse ease into its increased tax footprint as it adds new living wage jobs.

“If you spend money for new equipment and facilities, you should qualify for tax breaks,” Bailey said.

It’s been an eventful few years for Litehouse, which charted humble beginnings in 1963 when the Hawkins family started selling their homemade dressings at the family restaurant. The initially peripheral business venture grew over the decades into the sizable business venture it is today, with 850 employees total and more than 350 Sandpoint employees.

In January 2015, officials announced the complete sale of the company to its employees through an employee stock ownership program, giving every worker a stake in its success. The sale of the entire company to employees came on the heels of a 30-percent sale in 2006.