In William Shakespeare’s “Henry IV, Part I,” the young nobleman Hotspur has an existential moment as he considers the brevity of life.

“The time of life is short,” he says in the fifth act, “to spend that shortness basely were too long.” 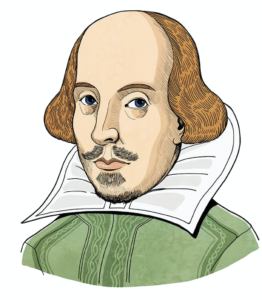 The man, the myth, the legend: Bill Shakespeare.

Luckily, spending time at a free, outdoor performance of “Henry IV” is the opposite of living basely. Seize the opportunity to make Hotspur proud on Saturday, July 27 as Lost Horse Press brings Montana Shakespeare in the Park back to Sandpoint for the fifth year.

MSIP is an outreach program based at Montana State University, featuring 10 actors chosen from across the nation to bring free, professional live theater to rural communities. As a local nonprofit promoting access to the arts, it’s a perfect event for Lost Horse Press to host, said founder and publisher Christine Holbert.

This year, Shakespeare in the Parks will take place at War Memorial Field. The afternoon will feature hours of entertainment, as the Music Conservatory of Sandpoint and Lost Horse Press team up to present a “Celebration of Arts & Culture” — an opening act that emphasizes diverse music and arts programs throughout the community.

Holbert said MCS contributes to the collaboration through the culmination of its summer academy, featuring MCS Music Without Borders, which hosts international music students. The afternoon will feature the internationally acclaimed Matsiko World Orphan Choir performing with the MCS Children’s Choir, as well as presentations from the MCS Chamber Orchestra, MCS Percussion Fun Ensemble and the MCS Theater Group. The Celebration of Arts & Culture will also include tribal and belly dancing from Azul Fire and Friends, poetry readings and a contra dance.

Holbert said she encourages audience members to arrive early with lawn chairs, blankets and picnics to spend time with friends and neighbors. It’s a summer event for all ages, she added— an aspect of the annual gathering she observes fondly.

“I just love how many young people come to be in the audience,” she said. “They’re interested and engaged with the play, and that’s wonderful to see.”