The Pend Oreille Rowing and Paddling Association has long held its annual regatta, when rowers from around the region gather in North Idaho to take part in some serious racing.

Working with the U.S. Army Corps of Engineers in 2021, PORPA decided to create an event that was “less niche” — rowing — “and more across the board to involve the community at large with all other non-motorized crafts,” according to PORPA Secretary Erwin Muller, who also serves as rowing coordinator, equipment maintenance manager and race scheduler.

Thus, the Priest River Sprints were born, with the premiere event slated for Saturday, Aug. 21 at the Mudhole recreation area in Priest River. 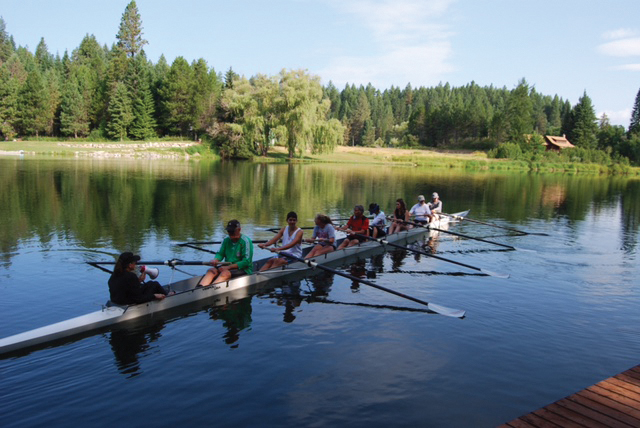 Members of the Pend Oreille Rowing and Paddling Association embark on the first row of the season in 2016. Courtesy photo.

Watercraft welcome at the upcoming sprints include rowing singles, kayaks, canoes, standup paddleboards and rafts. There will be races specifically for experienced, novice and junior rowers and paddlers, as well as a relay race. All watercraft must be solo-powered.

“It has been so well-received that we have registrations in all categories, and even one family that has registered for the relays using four different crafts,” Muller said. “Also, thanks to the continued cooperation with the [Corps], there is now a non-motorized boat launch at the Mudhole, whereas in the past we had to share the boat ramp with motorized boats, which was conflicting.”

A tentative schedule for the day includes races from 8 a.m. to noon, culminating in an awards ceremony. Participants are encouraged to bring their own lunch and, starting around 1 p.m., take in some rowing shell demonstrations put on by PORPA members. Members of the Kalispel Tribe will also be there to give a presentation on the tribe’s relationship to the Pend Oreille River and other local waterways.

At its core, PORPA aims to “promote non-motorized, human-powered water sports in the area, which has been the practice for centuries on these waters,” Muller said.

“We think there is no better way to promote these sports than to draw back from history and explain how this has been done,” he said. “It is quite amazing and fitting that the Mudhole is considered an archeological site, since it has been used for commerce, recreation, fishing and habitation for centuries.”

Take part in the first ever Priest River Sprints on Aug. 21, with check-in starting at 7:30 a.m. at the Mudhole recreation area, located half a mile east of Priest River on Highway 2. Safety meetings and races will begin soon after.

Registration costs $35 for racers 15 and older, and is free for those 14 and younger. All racers receive a T-shirt. Same-day registration is welcome. The event will follow all COVID-19 protocols based on federal, state, local and sport-specific guidelines.

Learn more about the Priest River Sprints at porpa.org, or contact [email protected] with questions or to register ahead of time.