A history of healthy communities

Since its founding more than 175 years ago, the YMCA has always been about healthy communities. 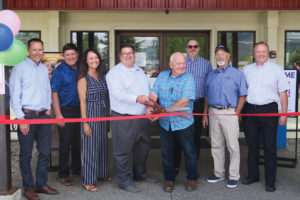 Seven months ago, the epicenter of health and social activity that was Sandpoint West Athletic Club became Litehouse YMCA. With the blessing of SWAC owners Don and Sue Helander, the Y melded right into the existing framework with minimal disruption.

“It was a wonderful transition,” said Mary Berry, director of communications and marketing for YMCA of the Inland Northwest. “This was an existing organization that really fit with our mission and the work that we do.”

Berry said the smooth transition was also thanks to the fact that many of the original SWAC employees elected to continue working with the YMCA.

“We were fortunate enough to hire all of the staff that had been with SWAC that wanted to continue their employment with us,” Berry said. “With members, having those familiar faces around was really great.”

The Greater Sandpoint Chamber of Commerce on July 24 officially welcomed Litehouse YMCA at a ribbon cutting at its Pine Street location. YMCA of the Inland Northwest President and CEO Steve Tammaro greeted the crowd with a few remarks on the importance of community to the YMCA. Kendon Perry with Farm Bureau Financial Services — who served as the YMCA Sandpoint advisory board chair — spoke next, thanking all those who were responsible for guiding the acquisition. Litehouse CEO Kelly Prior followed, pointing out that the YMCA and Litehouse share similar “core values.”

“The founders of Litehouse had a history of supporting YMCAs,” Berry said. “They already knew the values and mission and cause of the organization. Litehouse is really about giving back to the community, so it was a natural fit.”

Berry said that after seven months, the YMCA is pleased to report an uptick in membership.

“One of our main goals is to be an organization that’s welcoming for everyone,” she said. “What we’ve seen are more families engaging with us. They’re looking for time to come together as a family, time for open swim, or playing ping pong.”

There are currently more than 10,000 YMCA locations around the nation, each dedicated to providing a space for young and old to engage in physical and social activities. Often dubbed “America’s Swim Instructor,” millions of kids have learned to swim at the Y. Basketball, volleyball and racquetball were all invented at a Y. While the variety of new programs, including summer camps for kids and sports programs, is exciting, Berry said one of the features she is most proud of is the financial assistance for members.

“We want to make sure everyone who wants the Y experience can have one,” she said. “Our job is to really work with everyone to find a solution that works for them.”

The Y offers a sliding scale based on household income. For those interested to see how they qualify, go to the YMCA site and click the “join the Y” tab for more information.

Tammaro summed it up best: “The true measure of any community is its willingness and ability to support the most vulnerable among us … to weave the all-important safety net which ensures a quality life for all. The YMCA is where everyone can have a safe place to learn, grow and thrive.”