Netflix original ‘The Dig’ delivers drama in the dirt

Sometimes it seems there’s little left for humankind to discover other than ever-more inventive ways to mess things up. So it is especially satisfying to reconnect with a sense of adventure and exploration that reminds us what it’s like to uncover something new that enriches the human experience.

That feeling is found in abundance with the surprise hit Netflix original The Dig. Based on the 2007 novel of the same name, which itself was based on the discovery in 1939 of an almost intact Anglo-Saxon ship under an earthen mound in the east of England, its popularity is surprising not only for its academic premise but also because most of the action occurs with people scratching around in the dirt. 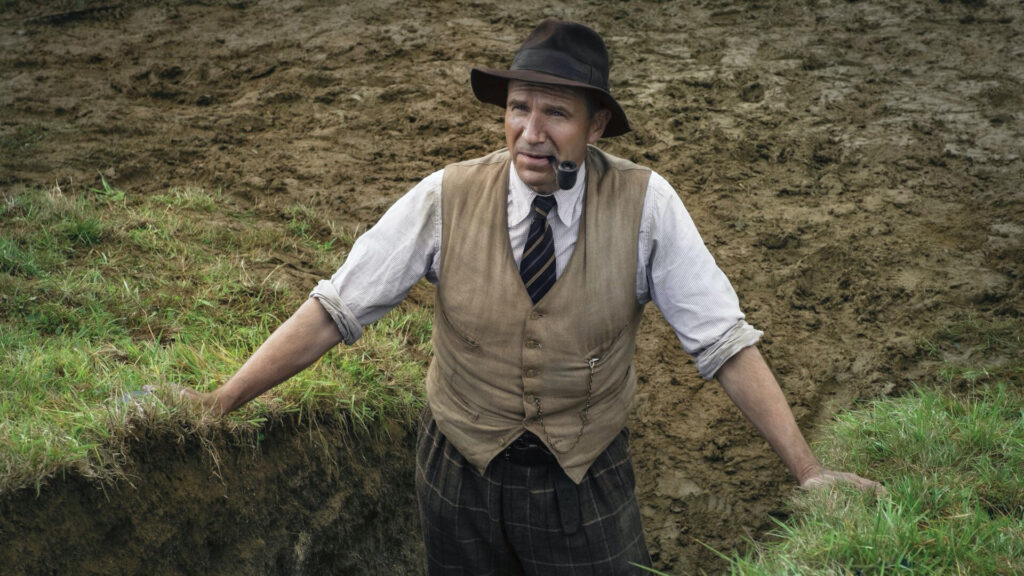 Of course, archaeology has long offered a rich vein of on-screen excitement — Indiana Jones, The Mummy and Lara Croft: Tomb Raider all come to mind — but not so many are as contemplative and on-the-ground, so to speak, as The Dig.

Adapted by writer Moira Buffini and director Simon Stone, the film stars Ralph Fiennes as real-life amateur archaeologist (he calls himself an “excavator”) Basil Brown and Carey Mulligan as Edith Pretty, the upper-crust young widow on whose land the Sutton Hoo ship was found.

The film opens in gorgeous slow tones as Brown cycles his black Penny Farthing bicycle through the East Anglian countryside en route to Pretty’s rural manse — revealing that the wind-swept, wide-sky landscape is another star of the show.

In short order we find Brown to be a rumpled, slightly cantankerous man of few words, as the self-taught expert meets the aptly named Mrs. Pretty, who wants to hire him away from another dig sponsored by nearby Ipswich Museum to look into the mysterious piles of earth on her vast property.

From their first meeting it’s clear that the crusty excavator and wounded young mother are kindred spirits — both enthralled by the mysteries of the past — yet sharing a pained-yet-proud sense of outsider status. It turns out both have always wondered what was under those big mounds; Brown’s instincts and self-taught expertise tells him what lies beneath is probably Anglo Saxon — dating to the seventh century CE — and Pretty thinks she knows exactly which hillock will yield the most important discovery.

After some bandying about, Brown ditches his museum gig and agrees to excavate based on Pretty’s hunch. She provides him with a crew of two sturdy workmen and a little shed on wheels, and, with Pretty’s curious young son Robert as a charming supervisor, they get to digging.

The emotional core of the first third of the film focuses on the growing respect between Brown and Pretty and affection between Brown and Robert, as the digger comes to fill some of the heartbreaking void left by the death of Mr. Pretty. Meanwhile, the excitement mounts as the excavation begins to yield little artifacts indicating that something phenomenal does indeed lie in the rich Suffolk soil.

By the second act the full significance of what Brown and company has unearthed becomes clear as the ribs of the enormous ship emerge from the ground. Prior their discovery, historians and archaeologists had written off the Anglo Saxons as little more than barbarians — a marginal people overshadowed by the Norman invasion in 1066 CE. The Sutton Hoo ship literally rewrote the book on the sophistication of these so-called “Dark Age” people, revealing them to be skilled artisans, worldly travelers and possessing a rich culture.

Underscoring this groundbreaking — so to speak — addition to the historical record, the big wigs from the British Museum descend on the site, jockeying with the local museum over who should manage the remainder of the excavation while at the same time sidelining Brown, whose credentials came from experience rather than academic training.

This is where the film starts to take some serious diversions from what actually happened on the dig. The British Museum crew in reality worked with Brown, rather than push him aside. Of course they would — in the film, as in reality, the looming war in Europe made it imperative to finish the excavation as quickly as possible before every aspect of British life would be mobilized. This dramatic tension is teased to great effect by the ever-increasing numbers of Spitfires and Mosquitos droning over the dig site.

More egregiously, the film recasts archaeologist Peggy Piggott — who was actually highly experienced and respected in the field — as a wide-eyed novice whose fellow archaeologist husband is secretly gay (Stuart Piggott was not, according to any available sources). In a similar strange twist, the two real-life female photographers on the dig have been replaced by the completely fictional character of Pretty’s hunky nephew, who provides an unnecessary love interest for the unhappily married Peggy.

All that aside, The Dig is at bottom a humane, at times achingly beautiful, and exceptionally well crafted docudrama about the power of curiosity to change how we understand ourselves and the world.