Sara Lee and me

The pound cake, an all-time favorite dessert, has been around forever. It was first recorded here in the 1796 cookbook, American Cookery. I don’t have a copy, but I do have at least two dozen cookbooks that are more than 100 years old, and each includes a recipe for pound cake. James Beard apparently liked the loaf cake, too, as he also included a recipe in several of his cookbooks.

Pound cake was pretty simple to concoct: a pound of flour, a pound of sugar, a pound of butter and a pound of eggs. And a pound of flesh. Yep, there was no leavening ingredient, except air, so some of the oldest recipes recommend beating the (stiff) dough for an hour (just thinking about that makes my repaired rotator cuff ache).

I tend to use a scale, which can be set to pounds or grams for recipe measurements, as I use a lot of recipes written with metric weights. But I do wonder if the kitchens of my foremothers had scales or if they just intuitively knew that eight or nine eggs weigh a pound?

The ubiquitous pound cake is called quatre-quarts in France, or ponque in Colombia and Mexico. Some countries add a little something to make it their own. If you’ve ever been to the Carribean, you will see aisles and aisles of Tortola rum cakes, and the South American version is drenched in wine.

The cake has many variations in the U.S., too and is especially popular in the South. One of the oldest recorded recipes came from the first known cookbook written by an African American, Abby Fisher. Fisher was born a slave but after the Civil War made her way to San Francisco and sold her homemade wares of pickles, preserves and fruits. Since she could neither read nor write, her friends wrote the recipes from her oral instructions. Her book, What Mrs. Fisher Knows About Old Southern Cooking, is still available (on Amazon).

Being a curious food-purist, I have attempted to make the original cake from a couple of my older cookbooks, but I’ve never been completely happy with the results, and they tend to be dry and lacking the flavor I’d hope for.

Today’s more modern recipes for pound cake include leavening agents, such as baking powder, and flavors, like vanilla and lemon. (According to thrillist.com, Starbucks’ best-selling pastry is its lemon pound cake).

Pound cakes were always a staple for me in my catering days. We made them by the dozens — lemon, vanilla, almond and chocolate — and served them for morning conference breaks and wedding brunches.

During my tenure as a private railcar chef, pound cakes were also omnipresent, including my dirty little secret: Sara Lee was my galley stowaway. I’d remove the familiar red-and-white packaging and then wrap and stash the cake deep in the small freezer. If needed, Sara Lee and I were ready for any emergency, like losing power in the middle of baking (thanks to a spotty head-end train engine or a pesky generator). Those dependable, crumb-less cakes became the foundation of many petit fours, trifles or ganache-covered creations.

Whether you lose power or just don’t feel like baking, Sara Lee will not let you down. If you’re in a hurry, and just want to get to the fun part of creating sans the baking (I feel that way when I paint; I hate the prep work and just want to slap colors to the walls), you’ll find Sara Lee stowed away in the freezer case of every store in town. It won’t taste the same as homemade but still pretty delicious enrobed in chocolate ganache. Between the pound cake and the ganache, you’re sure to make your sweetheart(s) happy.

Perfect Pound Cake with Chocolate Ganache
Makes one versatile, moist pound cake. For best results, use soft butter and room temperature eggs. Substitute vanilla with rum, Amaretto or other flavor of choice that will complement the ganache. Or skip the ganache, add lemon juice to replace vanilla in the batter — drizzle warm cake with lemon glaze and zest. 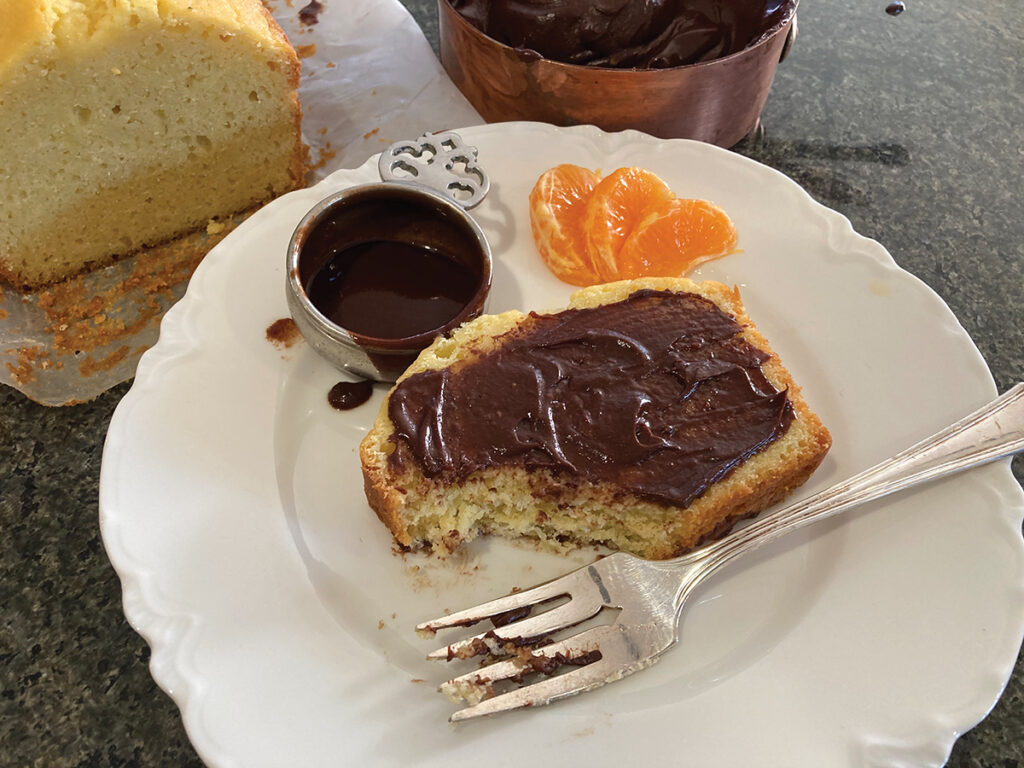 Preheat the oven to 325 degrees. Butter an 8×4-inch loaf pan and line with parchment paper (up the sides). In a medium bowl, whisk the flour, baking powder and salt, set aside.

In a stand-up mixer, add the butter and sugar on high speed and beat until light and fluffy, about 2-3 minutes.

On medium speed add the vanilla and the eggs, one at a time, beating between each addition. Add the Greek yogurt and mix until fully combined.

Add in the flour, baking powder and salt until just combined, then pour the thick batter into the loaf pan and tap on the cupboard to remove air pockets. Bake for approx. 60 minutes. Test with toothpick for doneness. Remove from oven, cool on wire rack for 10 minutes, turn cake out to continue cooling. Wrap well.

Drizzle or spread ganache on pound cake, garnish with fruit.

Keep in fridge for a week or freezer for 2 months.

Place chopped chocolate in a medium heat-proof bowl. Heat the cream in a small saucepan over medium heat until it reaches a soft boil (don’t let it boil over). You can add a tbs vanilla, rum or other flavor at this point.

Pour the cream over the chocolate, stirring slowly in one direction, until smooth and glossy.

While warm, use to drizzle over slices of pound cake.

Tightly cover leftover ganache and store in the fridge for up to a week or freeze it for up to 3 months. Thaw in the refrigerator, reheat by placing in a glass bowl, over simmering water.