There’s a weird, wild world of movies out there, and for the first time, Sandpoint will have access to it in the theater.

The Sandpoint Reader and the Panida Theater are joining forces on Reader Reels, an off-kilter, after-hours film series for adults. The late night showtimes, 21-and-older age restriction, beer and wine sales and one-of-a-kind film selections promise raucous cinematic experiences you won’t get anywhere else in Sandpoint. 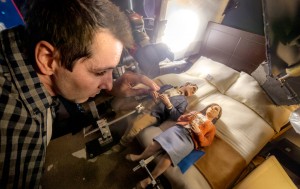 With Reader Reels, the Panida and Reader hope to expand the selection of late-night events for local adults. Given the often-limited variety of after-hours entertainment, the film series offers an alternative—or perhaps a quick detour—to the average weekend pub crawl.

Of course, the centerpiece of Reader Reels are the movies—more specifically the off-beat offerings of alternative cinema. These are the types of movies that might not fit your typical Panida Theater showing but still deserve an audience. Perhaps they’re too edgy, too adult or just flat-out weird.

That’s absolutely the case for the first film in the series, scheduled to play at the Panida Theater 10 p.m. March 12. “Anomalisa” is an intricately animated, Oscar-nominated claymation film, but don’t come in expecting something along the lines of “Chicken Run” or “Wallace and Gromit.” Written and directed by the brilliant Charlie Kaufman, “Anomalisa” continues his streak of hilarious yet deeply human films established by “Being John Malkovich,” “Adaptation,” “Eternal Sunshine of the Spotless Mind” and “Synecdoche, New York.”

The movie follows a self-help author suffering from severe malaise brought on by the mundanity of life. While on a book tour, he begins to perceive everyone as the same nondescript person, including his wife and son, until he meets a unique woman in a Cincinnati hotel.

True to Kaufman form, “Anomalisa” is hilarious and affecting in equal measure. It’s an introspective film that uses its distinct visual style to profound effect. Released in December, it received critical acclaim and was nominated for Best Animated Picture at last weekend’s Academy Awards.

“Need proof that animation can not only equal live-action filmmaking but beat the flesh-and-blood version at its own game?” Peter Travers wrote for Rolling Stone. “Try Anomalisa, as haunting and hypnotic an R-rated love story for grownups as you’ll see anywhere.”

Take that R rating seriously, because like many of the films to be featured at Reader Reels, “Anomalisa” is not for kids. It includes strong sexual content, nudity and language, all used in service of an insightful and compelling story.

Don’t miss “Anomalisa,” the first movie in the Reader Reels film series. The show begins 10 p.m. Saturday, March 12 at the Panida Theater. The event is restricted to ages 21 and up and will feature beer and wine sales. Keep an eye on the Sandpoint Reader for more announcements of future Reader Reels shows.