From refugee to Idaho farmer:

A story of humanity

It was the wet and muddy spring of 2011. En route to an agricultural internship in Sandpoint, I stopped over in Boise for a few months to get my feet under me. I’d been through ten states and as many countries in the previous year, and it seemed like a good idea to slow down and give back somewhere along the road. So, I started looking for an organization that needed some volunteer hours.

Allow me this confession: I love nothing better than throwing the doors of my life open to refugees from all struggles, religions, and DNA sequences. Ultimately, when life comes down to it, we’re not Hutus or Mormons or Libertarians. We’re all just people. I’ve been scratching my head over some of the bewildering moves our county officials have taken recently, and I couldn’t help but wonder: How is it that we feel so comfortable playing Billy Goats Gruff here on our Long Bridge? Is it the whole “we were here first” game? Because… let’s be honest, that’s rubbish. Most scientists and religious leaders agree at this point that the human race did not originate in North America—which makes all of us who live here in Sandpoint likely descendants of some refugee.

All of these thoughts made me think back to the wet and muddy spring of 2011, when I first began falling in love with Idaho, and I dug around my cluttered journals and computer, until I found this:

March 26, 2011. Every once in a while, trudging through life, I realize that I’ve gone weeks without looking out a window, and suddenly life is bright again. I’m having one of those month-long moments, where I feel like grabbing people by the shoulders and shaking them and shouting, “Isn’t life great?”

I stare at people’s faces at stoplights to see if they feel the same way, but everyone else steers around me in their swift and silent car flocks, onto the highway and off again, quieter than the ducks laughing in the skyways above. 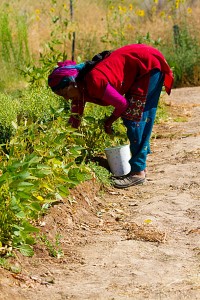 So these days I allow myself to drift off the highways onto the back roads, just waiting for the next bend, a glimpse of beauty around the next corner. And, often as not, I’m not disappointed.

In Idaho, God hides heaven imprudently, only about three minutes off the highway. Gifts are barely even wrapped. Every dirt road leads to a surprise sun-speckled valley crowned with scattered mesas, or a pasture of quiet cattle, whose calves’ astonished faces tell me my little red car might be the first they’ve seen.

Southwest Idaho is a beautiful place; a strange mix of high desert and forest, hills and flat spaces. The mountains lie low and velvety in every direction, like an unmade bed, soft and curvaceous, seductive. Between them lie so many places of history, but few people know where to find them anymore.

I had to search hard to find the community of Mayfield, which used to provide produce to Oregon Trail pioneers, just four crumbling wood and stone and shingle buildings from the 1830s behind someone’s pasture fence.

The quiet dance hall has some untalented graffiti on its walls. Lonely settlers used to walk or ride over here from 20 miles away for events. Or there’s Bonneville Point, from which the whole Treasure Valley is visible in its strangely wooded glory, Boise’s buildings in the midst of the mountains and low desert brush, cliffs and clouds knitting together in a sight too big to take in, a 30-mile panoramic. 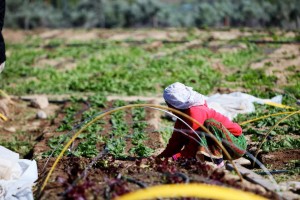 There are few places where I sense “something bigger” than myself more easily than where eight little people work a small farm acreage in the Surprise Valley, along the Oregon Trail in southeast Boise. This is Create Common Good, formerly known as Common Ground, the oversized garden of a local nonprofit that employs refugees to meet local needs, all while learning English and being trained in future “employable” skills.

While I wait for my farming internship to start in mid-April, I’ve been volunteering here two days a week, shoveling dirt alongside the refugee staff and trying to encourage them in their quest to speak more English.

These people have been living in and out of refugee camps for most of my lifetime. P., from Congo like me, used to be a pastor and a teacher before fleeing the country—his ethnic heritage gave him the wrong nose shape and put him in soldiers’ gunsights.

This guy has a higher level of education than I’ll ever reach, and even though he is pulling weeds by hand in secondhand clothes in the coldest weather he has ever seen, the man is smiling, and usually whistling. He can’t communicate his emotions, his longings, his thoughts with most of the people around him. Having been there, I know he is terribly alone. But, he is safe. And because he is safe, he is home.

The seven folks from Bhutan are part of a people group that was displaced in a conflict at the end of the 1980s. The way it has been explained to me, their people group emigrated from Nepal to Bhutan hundreds of years ago. 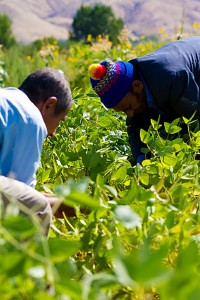 However, in the last century, the Bhutan kingdom decided that they could no longer be citizens. They were given the choice of signing a declaration that they weren’t citizens, or spending significant time in jail.

About 25% of them were forcibly removed from the country before the international community stepped in. India took them in for a while, then placed them all in dump trucks and literally dumped them out across the Nepalese border. Unwanted on every side, they’ve lived in camps ever since.

Now they are here, finally in houses of their own, men wearing girls’ used jackets and woolen pink hats, whole and remarkably happy.

At 66, K. is the oldest in the group. He wears traditional skinny linen pants that are tight and form-fitting, like an imitation of the rocker jeans that young men wear in café’s downtown. Most sixty-year-old’s I’ve known would be angry to find themselves still working the ground, shoveling dirt for seven hours a day, three to five days a week. Surely he is tired and sore. But I’ve rarely seen him any way other than lively and positive, with a healthy dose of mischievousness in the mix.

When it’s time for English class, he’ll turn to us and say, “English, no!” with a petulant tone like that of a toddler, but with a smile on his face. We all laugh. I tease him that he only speaks “little, little English” because he only eats a “little, little lunch”—a banana or a mango every day, sandwiched by rice for breakfast and dinner. No wonder he’s so skinny.

But he is alive, he is here, and he is working. I wish we could communicate better, so I could hear his philosophy on life—what the colored dot he has painted on his forehead means to him, how he feels about his Promised Land now that he is here, and what makes him smile every day.

These people are so beautiful, it makes my heart swell. I stop sometimes and lean on my shovel and look at them, and at the bluffs that line the Oregon Trail behind me, and at the snow-covered mountain peaks in front of me. Their impenetrable chatter mixes with the honking of the Canadian geese, flying in just under the ridge into the tree-sheltered creek nearby.

They are Idahoans, and they are home.