I should have known what I was getting into when Mary Faux asked me if I was ready for “hat heaven.” 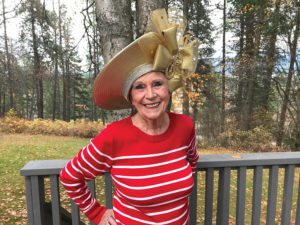 Mary Faux shows off one of her more ornate hats. Photo by Lyndsie Kiebert.

There’s something infectious about the way Faux shares her hats. First, there’s finding the correct box, labeled with a description, year and where the hat was purchased — whether from Nordstrom or some of Faux’s other choice shops. Then, there’s the removing of the lid and oftentimes the protective plastic or tissue paper. Next, Faux handles the hat with care, flipping it over, revealing a stitched in label with the name of one of her favorite designers, of which there are many.

Finally, Faux places the hat on her head, flashes a smile that lights up her eyes, and recounts a story involving that specific headpiece. Then, once the hat is back in it’s box, the process starts again.

While wading through the shoulder-high stacks of hat heaven, Faux recounts how she began “seriously” collecting hats in 1963 when she moved to Sandpoint.

“But I’ve always worn hats,” she said. “My first memory of going to school was of a red hat that I wore.”

Right now, Faux estimates that she owns somewhere around 200 hats, and wears one every day regardless of where she’s going.

“When people ask me which one is my favorite, I always say ‘the one I’m wearing at the moment,’” she said.

Faux goes by many names, one being the Hat Lady. Once, she was crowned Sandpoint’s First Diva. She’s been recognized as a Woman of Wisdom by the local Women Honoring Women committee, and has won countless awards for “Best Hat” at more events than you’d think would have such an award category.

Faux’s favorite title is the result of an inside joke that has now grown into a persona: The Queen of Ponderay. It all started thanks to her favorite checker at Yoke’s, where she regularly shops.

With her 90th birthday next week, Nov. 6, Faux said she’s been doing some reflecting on her life.

It would be impossible to look back on Faux’s nine decades without mentioning her six children, or her survival of breast cancer in her 60s. It would also make sense to note her involvement with a number of community organizations, including time as president of the Washington Elementary PTA and her church’s altar society. In classic Mary Faux fashion, when asked “What other groups have you been a part of?” her answer is: “The ones that I haven’t been,” followed by a good-hearted laugh.

She said her highlights are many, including visiting several Major League baseball stadiums with her husband, Howard; having a brick on the Rose Kennedy memorial walk in Boston dedicated to her, thanks to her son; giving a speech at the 2017 Sandpoint Women’s March, which she recounts as a day that “touched many people”; or maybe the biggest highlight was traveling to Rome to see Pope John Paul II sometime in the ‘80s. 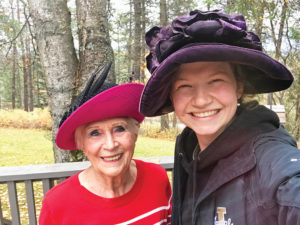 The author poses with Mary Faux in a hat Faux custom ordered from a Nordstrom sketchbook. Selfie by Lyndsie Kiebert.

My morning in hat heaven exemplified the unique spunk Faux is known for, as with every hat and every story she lit up more and more. Back upstairs, as our time came to a close, she asked me to pull one last hat box from the top shelf of a closet near the front door. In it was a velvety purple hat she custom ordered from a Nordstrom sketchbook. Although it was “custom,” she said she wore her brand-new hat home only to see Dennis Rodman wearing it on TV that same day.

She put the Dennis Rodman hat on my head, adjusted it just right, then requested a selfie. I was more than happy to oblige.

Mary Faux is many things to many people, and the Queen of Ponderay said she’s grateful for those connections.

“Oh I just love it,” she said, pausing to find the right words. “I just really love people and I feel honored to be a part of this beautiful community.”

Celebrate Mary’s birthday with her on Saturday, Nov. 3, at St. Joseph Catholic Church from 2-4 p.m.