Young Voters: Will their voices be heard this November?

There’s a voting powerhouse in the U.S. with the ability to transform the political landscape — if anyone can get it to turn out, that is.

Young Millennial voters — particularly those in the age 18-29 category — have the potential to play a major role in hard-fought Congressional elections this November. Problem is, the age group is notoriously difficult to activate. And despite the bizarre circumstances of the modern political era, that doesn’t look to be changing. A poll from the Public Religion Research Institute and the Atlantic indicates that only 28 percent of young adults said are “absolutely certain” they’ll vote in this year’s elections. That’s especially dire compared to the senior demographic, which said with absolute certainty they’ll vote to the tune of 74 percent.

The general sense of apathy concerns local educators. In the Sandpoint High S 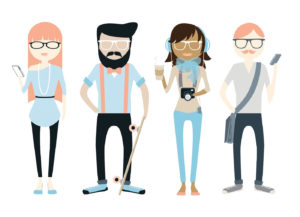 chool Social Studies Department, teachers have been working to inspire civic interest in their students. But with America seized by an intensely polarized political climate, that’s easier said than done.

“Given the weird times we’re in and the polarization, I’m seeing apathy and disillusionment among students,” said teacher Debbie Smith.

That certainly reflects SHS senior Mason White’s experience. White is among the 56 of 219 SHS seniors who will turn 18 before the Nov. 6 election. But she says gauging her peers’ political engagement is difficult precisely because of their reluctance to accept its social risks.

“I think there is a lot of insecurity as far as (my peers’) political opinions go,” White said.

“Right now we are pretty polarized, and kids are scared that if they say something, they’ll get jumped on or made fun of,” she added.

There are two sides to that coin, though: While political animosity makes conversation difficult, the unusual and controversial  nature of modern politics can also make it easier to engage students. White said her political awareness began a year and half ago, due in no small part to the unprecedented nature of the times.

“I think the past year and a half has been the only time that I’ve paid attention — not only to politics but everything that’s happening around me,” she said.

Between the reluctance to talk politics and a prevailing apathy, it’s difficult to know just how many students are paying attention.

“The kids who are most vocal are usually in the minority, and we have a silent majority,” said SHS teacher Erica Haynes.

White echoed that observation. Because so many of her classmates keep their engagement in government and civics classes to a minimum, it’s difficult to speak for them.

“There’s a whole section of the student body that I can’t speak for,” she said.

Because she’s been attentive to current events, White said she’s excited to vote in the 2018 election. For the rest of the high school’s eligible voters, SHS teachers said they’re working to get them interested in time for the election. And that starts in the classroom. SHS teacher Brian Smith said education can go a long way to reducing student apathy.

“I think one of the barriers to voting is feeling informed, so hopefully what we do helps bridge that gap,” he said.

To that end, the high school’s social studies curricula are structured to prioritize election-pertinent topics. The idea is to give students the baseline knowledge they need before important elections roll around. Teachers start with the fundamentals of the U.S. Constitution and then get into concepts of political ideology anchored by real-life examples from the issues of the day.

Closer to election dates, teachers highlight how the voting process works and make sure their students have the resources to easily register if they are eligible. There’s also a practical incentive for students to brush up on the voting process: It can help ensure that they graduate without issue.

“We have a civics exam that seniors have to pass in order to graduate,” SHS teacher Kent Leiss said. “That also motivates students because they know they have to pass that to graduate.”

While teachers across the country work to spark political awareness out of a sense of civic responsibility, partisan activists are reaching out to young voters as a matter of self-interest. Polling data from Pew Research Center shows that 68 percent of young women and 47 percent of young men prefer Democratic candidates. With the stakes at their highest in this year’s midterm election — a Democratic takeover of one or both chambers of Congress would have grave implications for the Donald Trump Administration’s ability to pursue its agenda — left-wing activists are hoping to excite young voters in the states that matter.

“Right now the ‘blue wave’ is being powered by suburban professional women, but to fully capitalize on 2018, Democrats need to energize young voters and voters of color,” Dave Wasserman of the Cook Political Report told Vox.

No matter what happens in November, local teachers are simply focused on encouraging young adults to be informed and interested voters. And while youth apathy is a serious problem, they said there’s cause to take a more optimistic outlook, too.

“I’ve been surprised about how smart and educated my students really are,” Leiss said