You know you’re a local when, returning from the south, you get that special feeling of “I’m home” — a burst of endorphins or a sigh of contentment when you reach and cross the Long Bridge. Its history is embedded in the lore of the town, from the longest wooden bridge in the world to its current extension with the controversial but useful bypass. But it wasn’t the first Sandpoint bridge, nor the first wooden bridge, to span Lake Pend Oreille. 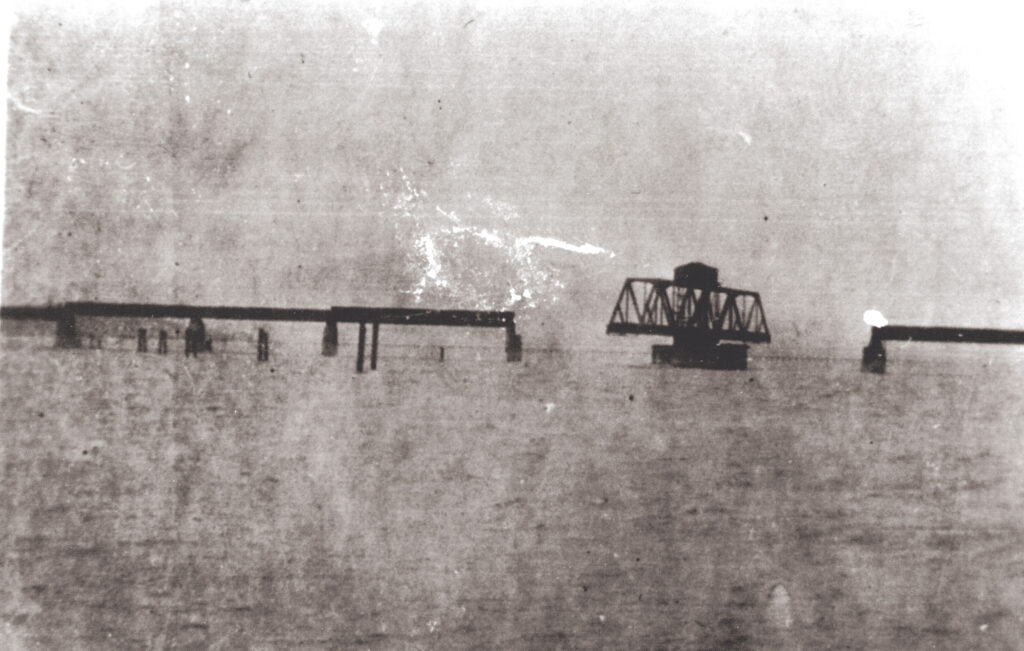 Crossing the Long Bridge, looking east, you often see a mile-long string of train cars crossing an equally impressive lengthy bridge across the open water. We can imagine the rumble of the engines, and hear an occasional train whistle, while cars full of coal, oil, manufactured products of all sorts, and occasional plane fuselages or windmill blades pass through to destinations east or west.

The train bridge goes back 137 years when the northern transcontinental rail route depended on finishing the bridge before the rail barons could pound in the ceremonial golden spike in Gold Creek, Mont., signaling the connection from St. Paul to Seattle. That hastily-built bridge started in 1882 and finished in 1883 in order to meet the congressional deadline for the railroad to be granted land as compensation. The Long Bridge didn’t come along until 1910.

Then-Secretary of War Robert T. Lincoln noted in the progress report to Congress that “the most difficult portion of the whole line to construct was around and across Lake Pend d’Oreille.” Of course, they used timber to build the trestle since they had to cut down trees along the route in order to lay the track. “Might as well put it to good use,” they noted in the report.

When they built the original train bridge, it lay mostly across the seasonal mudflats, the “sandy point,” crossing only a shorter length of the deeper part of the lake/river. But the flood of 1894 changed all that.

The flood waters inundated the wooden bridge, threatening to float it away. Workers put flatcars loaded with rock on the bridge to hold it in place while the water receded. The event prompted the railroad to design and build a replacement bridge six feet higher than the original.

Using 83 cement piers we now take for granted, steel spans and a swinging bridge to accommodate steamboat traffic, the 1904 replacement was also necessary because of increasingly heavier train loads.

A Northern Idaho News article from the museum archives notes that replacing the old bridge was becoming necessary, “because the old pile bridge which has done duty for so many years in spanning the waters of the Pend d’Oreille creaks and moans with every passing train.” The “new” bridge was the talk of the town and gave a boost to the local economy.

Today’s anglers can tell you that the old wooden bridge pilings still exist underwater, losing many a lure and tackle to that portion of unseen history. Over the years improvements to the existing bridge meant dropping replaced sections onto the lake bottom, too.

The “new” bridge also nudged the town of Sandpoint west of Sand Creek and out of the control of the railroad. The six-foot bridge height increase meant a six-foot rise in the grade through the middle of the original town. The rail passenger depot was moved north and to the west side of the tracks, and soon all commerce completed the move to the west side of the creek. Few were willing to continue going up and down the new tracks to get to businesses on either side of the tracks. But that’s another story.

Driving past the bridge today you might notice the cranes and pile drivers on barges busy adding a second train bridge across the lake. Again controversial, it solves the century-old problem of “the funnel,” where trains would have to wait their turn to cross the lake. The goal is to increase efficiency of movement, but also the number of trains carrying goods from 65 to more than 100, although BNSF downplays the increased potential number of trains.

For up-to-date information on the construction, go to keepsandpointrolling.com or lakependoreillewaterkeeper.org.

With the new bridge construction drawing your attention, you might notice the odd section of the 1904 bridge, seemingly a trestle on a trestle. The bridge design had to accommodate the steamboat traffic that dominated lake travel before the trains arrived.

This strange part of the trestle is a swing bridge. It sits atop a circular cement pier and used to swing open when a steamboat, or tugboat towing logs to a lumber mill, needed to pass. The water depth is 40 feet under this section, 30 feet on either side of it and 20 feet deep approaching either shore. The swing bridge stopped operation in the 1920s.

No longer there, a small cabin sat atop the swing bridge, where the operators were stationed to use a 15-horsepower gasoline engine to swing it open. A local historian noted, “The guys who sat up there were basically gassed every time a locomotive passed over the bridge.”

The swing bridge opened one last time in 1957, according to Sandpoint native Ted Farmin, an equipment operator during his teens.

“We needed to get our pile driver to the other side of the lake,” he said. “My boss worked it out with the railroad. Two guys on each side with ‘keys’ were able to get it to swing open. It looked very different dangling over the water.”

Out of the thousands of donated photographs, the museum has only one photo of it open, and since it still had the operator’s cabin above it, it must be before the 1930s. Without the generosity and vision of longtime residents, the donations of photos, artifacts and key objects that tell a story of the past to the Bonner County Historical Museum, we would be left to wonder about who we are, where we came from and why Sandpoint remains a vibrant town compared to the many railroad towns that have faded into mere footnotes in history.

This article and research were brought to you by the Bonner County Historical Society.