Mad About Science: The golden age of piracy

Avast, me hearties! Sept. 19 be International Talk Like a Pirate Day! T’ celebrate, I be bringin’ you this article in fluent Pirate. Shove off!

The Golden Age of Piracy be a time from 1650 ‘til 1726 when pirates ran rampant, bringin’ death ‘n’ stealin’ booty from Europe to the Caribbean. Ye might be wonderin’, why did such vagrancy run so merrily? Well, ye salty dog, I’ll tell ye! 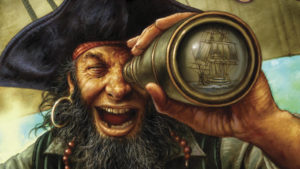 The English Crown caught colony fever, spreadin’ the ol’ Union Jack across the seas. Europe was sufferin’ from civil war, like the Spanish War of Succession. Instability, overreach ‘n’ plenty o’ worthy ships made fer a lit powderkeg, just waitin’ to blow! Trade between colonies an’ the crown were ripe for plunder by sea.

We be havin’ a romantic sense of pirates, now: dashin’ swashbucklers, swaggerin’ buccaneers, charismatic captains three sheets t’ the wind on rum and booty! Pirates weren’t so well liked in their day. Aye, they were thieves an’ plunderers, lawless murderers livin’ lives that were rated … Arrrr. This be why their golden age were so short lived. Nations ‘n’ trade companies were tired o’ their hard-earned treasures vanishin’ to the deep blue, ‘n’ they made efforts t’ track the scurvy dogs down ‘n’ bring ‘em t’ dance the hempen jig. For ye green landlubbers, that means the law hung ‘em high with a hempen cord ‘round their salty necks.

It may surprise ye t’ know the captains of privateers were voted in. They nae be kings nor autocrats, an’ they nary received special treatment. Pirate crews were called freebooters fer a reason. They be free men, unbound by the tyranny of military life ‘r the authority o’ merchant crews. Pirate crews ran ships like yer HOA runs yer neighborhood, with elected individuals ‘n’ councils an’ punishment befitting a crime (against the crew, that is.) The cap’n held absolute rule only durin’ the heat o’ battle, like a Roman dictator.

Eyepatches an’ peg legs be a staple o’ pirate lore. Th’ practice o’ medicine around 1700 was miserable. Wounds that resulted in amputation likely didn’t include prostheses. On the open sea, sterile places t’ amputate didn’t exist, an’ the nutrition needed t’ heal were scarce. Grievous wounds probably ended in death, which may o’ been a mercy from the hard life at sea. Who would dare itch their stern with a hook fer’ a hand?

Every pirate fears a threat o’ the keelhaul. Keelhauling was a form o’ punishment, where the offender was dragged from one side o’ the ship t’ the other. By that, I mean dragged below the keel o’ the ship, ground against the barnacles that cut ‘em t’ shreds, an’ let the salt water burn their wounds. There be little t’ say that pirates did this t’ their own, but the royal navy did, t’ the point that it were even brought before Parliament t’ be stopped.

There be many famous names from the Golden Age of Piracy. Henry Morgan, Welsh captain, raider o’ Panama City. Morgan were a scourge to the Spanish settlements o’ the Caribbean, so much so that the English crown intervened t’ arrest him ‘n’ bring him t’ justice. Much t’ the surprise of the crown, the commoners o’ England revered him as a hero, an’ rather than face justice, was knighted an’ offered t’ be the first governor of Jamaica. In case ye be wonderin’, yes, that be him on yer’ bottle o’ rum.

A pirate more infamous than Captain Morgan terrorized the seas. Edward Teach, but ye’ may know o’ him as “Blackbeard.” He were a shrewd an’ calculatin’ man, known fer intimidatin’ his enemies before battle. He dressed in all black with pistols strapped t’ his chest, an’ fuses burning in an’ around his hat like some kind o’ demon of the deep. Blackbeard amassed a fleet, but was eventually hunted down t’ have his head removed and his body sent t’ the locker. His head made its final voyage upon the bowsprit o’ its captor’s sloop fer all the world t’ see.

Before we shove off fer the locker, ye should know for whom this insufferable speech is responsible: The patron saint o’ pirates an’ the father o’ the pirate “language,” Robert Newton. Robert Newton was an English actor who played the part o’ several pirates in cinema, such as Long John Silver in Disney’s “Treasure Island” and Blackbeard in “Blackbeard the Pirate.” This p-arr-ticular dialect be a variation o’ West Country English, comin’ from the seamen of southwest England.

An’ now, as we disembark, I share with ye’ a final joke.

The C, of course!