Written on the whiteboard in Debra Douglas’ classroom at Hope Elementary are several vocabulary words necessary for any music student to learn: whole note, half note, sustained sound, patriotism and more. 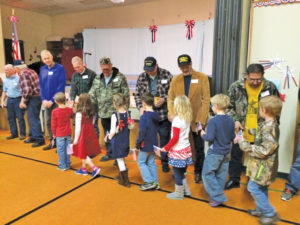 Yes, even “patriotism,” because Hope Elementary has their annual Veterans Day singing program coming up Monday, Nov. 12, at 8:30 a.m. The lyrics they’re learning have everything to do with “showing support for your country,” as the definition on the whiteboard reads.

This is Douglas’ first year teaching music at Hope, and her first year making the Veterans Day program — which has been going on as long as everyone at Hope can remember — happen. This year, the second- and third-grade classes will perform a musical rendition of the Pledge of Allegiance, and the fourth-, fifth- and sixth-grade classes will perform “God Bless America.”

“The second- and the third-graders doing the pledge, they’re really excited about that. They’re so excited they’re screaming it now, so I gotta pull them back,” she said with a laugh.

Hope School isn’t the only school in the Lake Pend Oreille School District with a Veterans Day program — every school is hosting some sort of vet-focused event to recognize the holiday. Natalie Cain has a special connection to the programs, having been a music teacher in the district for 24 years at several schools, including Hope. Cain now teaches at Kootenai and Northside Elementary schools.

Cain said she emphasizes the Veterans Day program as incredibly important to her students, and preparations often lead to conversations about the meanings of sacrifice and honor.

“This program is so important to all who are present, young and old, veterans and performers,” Cain said. “It allows the veterans the opportunity to realize they are remembered, and it gives students a chance to realize how important veterans are to our nation and the role they played in protecting our many freedoms.”

Fourth-grader Mae Grosenbaugh has been attending Hope School and the Veterans Day program since Kindergarten. She said she understands the importance of the event well.

Grosenbaugh said her favorite part of the Veterans Day program is when the students get to shake hands with the guests of honor. She said the veterans often tell her and her classmates how much they enjoyed the music.

One such guest of honor at the Hope program is Purley Decker, a 24-year Army Medical Service veteran. Decker taught at Hope Elementary for 15 years before his recent retirement, and now serves on the school district’s Board of Trustees. He will be in attendance at Monday’s program.

“It means a tremendous amount to me, especially with my generation and the way that we were treated when we came back from Vietnam,” Decker said. “It’s so much better now, and I think it’s because of programs like this.”

Decker said music programs like those that go on across the school district around Veterans Day mean that children are introduced to respecting veterans at a young age, and then are more likely to carry that attitude into adulthood.

“The children get a better idea of just what the vets have gone through,” he said.

Hope Elementary School Principal Sherri Hatley is a big proponent of the annual program. Her support stems from a perspective of necessity, she said.

“I can’t imagine not honoring our veterans,” she said. “My heart would not allow ignoring them.”

On Monday, Hope students will sing patriotic songs, veterans will share their stories and members of the public will visit to take part, as they do each year. It’s a long-running and unfailingly emotional event, which Douglas — a veteran herself — said she is excited to be a part of.