While the initiative benefited from bipartisan support and tireless promotion by activist group Reclaim Idaho, the outsized support of 364,861 in favor versus 237,276 against surprised even optimistic onlookers. Medicaid expansion will provide health coverage for thousands of Idahoans who earn too little money to qualify for subsidized insurance but too much money to meet Medicaid’s basic income limits. 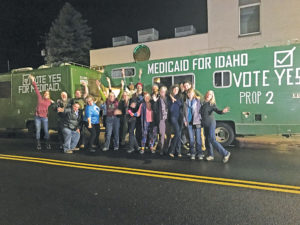 Volunteers from Reclaim Idaho celebrate in the streets of Sandpoint after Prop 2 passes. Courtesy photo.

“Tonight, these hardworking Idahoans are not forgotten; they’re not ignored, they’re not unheard or unseen,” said Luke Mayville, co-founder of Reclaim Idaho. “Tonight, they are lawmakers, because tonight, Medicaid expansion is the law of the land.”

The GOP handily won elections for Idaho’s highest national and state offices. Brad Little is Idaho’s next governor despite an energetic opponent in Democrat Paulette Jordan, winning the election 361,671 votes to 231,065. The GOP’s Russ Fulcher won a seat in the U.S. House of Representatives with 197,151 votes against Democrat Christina McNeil’s 96,909 votes. Republican Janice McGeachin won the race for lieutenant governor with 356,082 votes against Democrat Kristin Collum’s 240,292 votes. Lawerence Denney retained his office as Idaho Secretary of State with 369,893 votes against Democrat Jill Humble’s 221,939 votes. Likewise, Lawrence Wasden won another term as Idaho Attorney General, fending off a challenge from Democrat Bruce Bistline with 384,126 votes against 203,059 votes. The closest race of the night, in a 305,793-to-288,666 vote saw Republican Sherri Ybarra edging out a narrow victory for Idaho Superintendent of Public Instruction against Democrat Cindy Wilson.

Nationwide, the 2018 midterm election failed to produce the blue wave — the swell of progressive energy sweeping Democrats into office. But neither did the oppositional red wave lauded by President Donald Trump manifest.

Democrats succeeded in taking control of the U.S. House of Representatives, establishing a critical check on the Trump Administration. Republicans, meanwhile, firmed up their hold on the U.S. Senate, vital for its ability to approve presidential appointees.

Regardless of the outcomes, both sides were energized by the volatile political climate of the past two years. Nationwide, an estimated 49 percent of eligible voters turned out to cast a ballot, far outstripping the dismal 2014 turnout of 36.4 percent. In Bonner County, nearly 73 percent of registered voters made their voices heard in the 2018 midterm election.