“All wildlife, including all wild animals, wild birds, and fish, within the state of Idaho, is hereby declared to be the property of the state of Idaho. It shall be preserved, protected, perpetuated, and managed. It shall be only captured or taken at such times or places, under such conditions, or by such means, or in such manner, as will preserve, protect, and perpetuate such wildlife, and provide for the citizens of this state and, as by law permitted to others, continued supplies of such wildlife for hunting, fishing and trapping.” – Idaho state code 36-103. Wildlife Property of State – Preservation, courtesy of Idaho Department of Fish and Game. 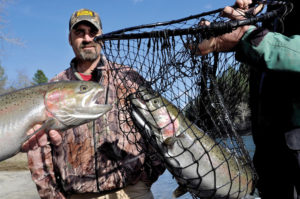 We live in extremely divisive times. Right now, we’re arguing about the role guns play in our culture, how our climate and ecosystems influence our survival and way of life. One thing I believe that everyone can agree on is that we live in a beautiful state, and we want our childrens’ grandchildren to grow up with the same access to opportunities and beautiful landscapes we enjoy.

I recently finished my hunter’s ed course with my better half’s kids, and had the opportunity to learn a tremendous amount about the role of hunting, fishing and trapping and its impact on our ecosystem thanks to the IDFG. Growing up, most kids my age were taught that hunting, fishing and trapping led to extinctions throughout history- Which is true, but just like bacon: everything in moderation.

The extinctions the history books are referring to are because of overhunting, which is when individuals go to great lengths to murder every animal in sight. So you would think doing the reverse and not killing anything would let nature balance itself back out, right? Not even close. If you let a prey population procreate unchecked, it will balloon out of control, kill all vegetation in an environment and then eventually succumb to starvation and disease, disease which presents the opportunity to spread to other animals or even humans.

Want proof of principle? Check out “Cat Island” or “Rabbit Island” in Japan.

It’s not a pretty truth, but predation is necessary. This is why IDFG exists, so we, as humans, can responsibly act as predators to keep nature in check and preserve the natural world’s health indefinitely.

Fish and Game works tirelessly to track wildlife population year-round with a helping hand from hunters and sportsmen. The department takes the data gathered from their own officers, volunteers, and the hunters out in the field and submits the information to the commission, a group of seven commissioners chosen by the governor (no more than four commissioners can be from the same political party, which I think is really cool) who set policies, dates and kill limits for the year.

Guns are an extremely divisive topic in our culture. I’m not going to open that can of worms — if you want an opinion on that, go to Facebook or Twitter. What I will share is that gun manufacturers pay a 10-percent tax on all firearms sales that goes directly to hunter education programs across the United States, to help educate the public on how to safely use a firearm. They also manufacture countless weapons and donate them to state bodies like IDFG to use for educational purposes. These programs are extremely extensive, and something that I personally feel that everyone in a rural community should take at some point, even if you don’t plan on hunting. The second-biggest cause of gun-related deaths in 2017 was from accidents, mishandlings or careless behavior, something that could be easily lowered by more education (the highest was from defensive shooting incidents).

The most important rule, when acting with or around any firearm, is treat it as though it were loaded. Be aware of it, where it is pointing, and only have your finger inside of the trigger guard if you intend to fire it. If you’re playing around with a gun, stop and think for a moment how badly it would suck if you got shot by some other idiot playing around with a gun, then make some serious life evaluations.

If you encounter a Fish & Game officer in the field, be respectful. They’re doing their job and trying to make sure you can continue to enjoy nature for the foreseeable future. Be vocal in what you’re doing, let them know that you’re unloading your weapon and keep it pointed in a safe direction. Comply with what they ask of you, and if you have any information you think may be relevant to them, share details. Personally, I thank them when they’re done, because they never know what they could be walking into in any given situation.

If hunting isn’t your thing, but hiking or boating is, you can get cash rewards for reporting instance of illegal poaching and harvesting. Whether you witness it happen, or if you find a discarded kill. Poachers ruin it for everyone, including non-hunters, and everyone likes cash in the bank for doing the right thing.

I was very appreciative of Fish & Game for taking time out of their busy schedule to help educate me this week, and wanted to do a little bit to shine a light on them and the great work they’re doing. Law enforcement is often a thankless job, so here’s my way to make it a little thank-ier: Thank you to the men and women of the Idaho Department Fish and Game. Stay safe out there!