Women of the Revolution: Soldiers, Spies, and Resisters

“We possess a spirit that will not be conquered.
Should we be attacked, you will find a race of Amazons in America.”
—Abigail Adams to John Adams (9/20/1776)

For some time now I have stopped using the phrase “Founding Fathers” and replaced it with “Founders” or “Founding Thinkers.” During the birth of our nation, women’s thought was as good as the men’s: they were writing books and poetry, advising their sometimes obtuse political husbands, running farms and businesses. During the Revolutionary War, women were also soldiers, spies and resisters. 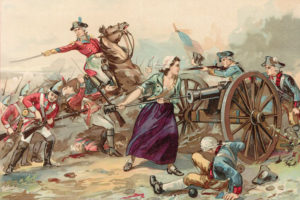 A painting of the moment Mary Hays took over firing her husband’s cannon at the Battle of Monmouth. Courtesy photo.

Today there is still is much debate about women in combat, but historians have found a number of women who were in the thick of fighting the British. As was the custom in those times, wives and children followed the troops from battle to battle. In addition to their domestic duties, American women routinely cleaned and loaded muskets and artillery pieces.

On June 28, 1778, during the Battle of Monmouth, Mary Hays, even though much of her skirt had been shot off by a cannon ball, took over the firing of her wounded husband’s artillery piece. After a long struggle for vindication, the state of Pennsylvania eventually gave Hays a military pension of $40 per year.

After her husband was killed at Fort Washington, Margaret Corbin took over his cannon, and, as journalist and historian Cokie Roberts describes it, “fought bravely, sustaining three gunshot wounds, until the British took over the post.”  The Daughters of the American Revolution were successful in having Corbin reburied at West Point, the only Revolutionary War veteran to have attained that honor.

Nancy Hart, known by her neighbors as the “Iron Lady,” lived in the Georgian backcountry where she was known not only as a good farmer, but also as an herbalist and a sharp shooter. One day six Redcoats came to her door and demanded that they be fed. Hart obliged, and they soon were stuffing themselves and getting drunk.

At the end of the meal, the Brits discovered that Hart had locked up their muskets, but kept three “cocked and loaded” ready at hand. When two of them lunged at her, she shot them dead. She held the rest at gun point, and when her husband came home, they decided that the remaining four should be hanged rather than shot.

South Carolinian Katie Barry was a resourceful woman who knew the Indian trails in her area very well. She alerted the local militia to the coming of the British, and this intelligence was crucial to a rebel victory at the Battle of Cowpens in 1781. She rode on horseback from farm to farm warning her neighbors of the British advance.

Lydia Darragh was a Philadelphia mortician, and she followed British troop movements through the city. She devised a code by which she was able to send messages to General Washington in Valley Forge.

When the Red Coats commandeered her home, she insisted on staying there with her children. One night she heard plans of an attack on Washington, and her intelligence was received just in time to prevent a disaster.

When some British generals dropped by the home of Quaker Robert Murray, his wife, knowing that General Putnam’s forces were in retreat from New York, entertained the Brits long into the night. This ploy gave Putnam just enough time to avoid a fatal battle against 8,000 Red Coats. Writing in his journal, Putnam’s surgeon remarked: “It has since become almost a common saying among our officers that Mrs. Murray saved this part of the American army.”

The most amazing story I found was that of Deborah Sampson. Going by the name of Robert Shirtliff, Sampson, described as a person with angular features, disguised herself as a man and joined the 4th Massachusetts Regiment of Continental Army.

Taller than the average man, Sampson qualified for a Light Infantry Company, whose job it was, as one source explained, “to provide rapid flank coverage for advancing regiments, as well as rearguard and forward reconnaissance duties for units on the move.”

During her first battle near Tarrytown, New York, she suffered a head wound and took two musket balls to a thigh. She received treatment for the head wound but refused the surgeon’s offer to operate on her thigh, fearing that her gender would be discovered.  She removed one bullet with her knife, but the second one remained embedded deep in her thigh for the rest of her life.

As we celebrate Independence Day, let’s remember to toast the brave ladies of the Revolution.

Nick Gier of Moscow taught religion and philosophy at the University of Idaho for 31 years. Read his article on religion and the founding thinkers at webpages.uidaho.edu/ngier/foundfathers.htm. Email him at [email protected]