Straight on Chestnut, right on Boyer, left on Larch.

Time the light just right so you don’t have to wait. Remember to let go of the handles as you cross the intersection; you have to. Into the store we go, in and out, we can do this. You brought exact change. You’ll be fine.

OK, we’re out. Do we want to go down a sick hill or past the bookstore? Bookstore it is. Make sure to time your pedaling, touching your left foot to the parking lines. 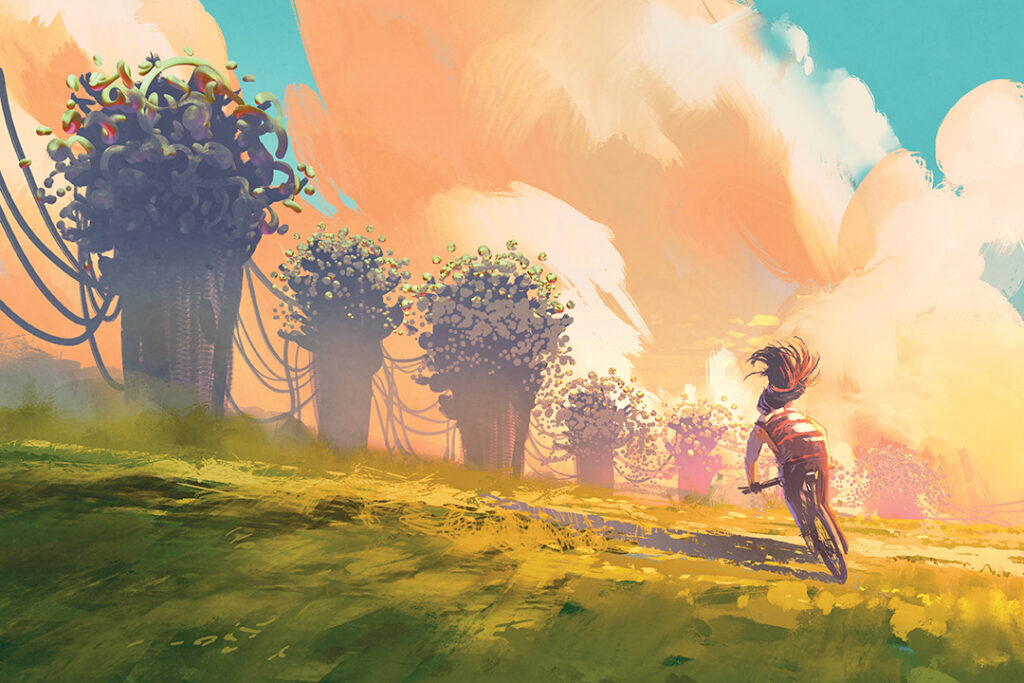 Welcome to my brain, my life, my routine.

I can pinpoint the exact day I completed these steps for the first time: March 26, 2020. This, as you may recognize, was the first official day of quarantine. Of course, I had been taking near-daily bike rides long before the shutdown, but not on this route. Every day for the past four months, I have ridden to the beach, armed with $1.60 cookies from the local grocery store, at least one Dan Brown book and some sort of sewing project. Those two-packs of chocolate chip cookies had become my daily meal; occasionally, if I felt spicy, I would pick up snickerdoodles instead.

I didn’t care what the weather held for me, I still rode. As you may imagine, the beach can become fearsomely blustery. As long as I sat under my tree, I didn’t care.

This exact routine was engrained to the point that I couldn’t ride anywhere else. It was so easy for me to simply clock out of life and let the bike glide down the familiar streets. I’ve visited the same corners so often that I’ve had strangers confess to watching for me in town. The recognition was unexpected, and quite unwelcomed, for watchful eyes are gratifying in theory but crippling in practice.

As this routine persisted and I could not go a day without reading Dan Brown under a fir tree, I began to think. It was early June, so I had been spending my days as such for about two and a half months at that point. Why did I have to end up at the beach? Why didn’t I frequent the graveyard? Or the park? My brain tried to rationalize, explaining that those locations required a longer bike ride, but they really did not. The reason for this neglect is simple: they were on the opposite side of town as the beach, and the route to them did not include a shop with a self-serve station.

These 86 days of mundanity, in retrospect, provided me with a way in which to study myself. I often lament the uncomfortable closeness of this town full of connections, at least half of which lead back to Schweitzer. Confidentiality is thrown out the window, along with the comfort of being surrounded by people you will never see again. Spontaneity is a scarce commodity.

This is the type of town where families come to settle down and live out their days. With stability comes routine, and in routine, we find peace. We set up a calendar on the fridge with Ethan’s soccer practice and Bella’s movie night. We know to refill the gas in the minivan every other Tuesday, and mom only cooks every other night. These events become the norm, and solace is found in knowing just what will happen tomorrow.

Despite this comfort, humans crave adrenaline. We crave the rush of blood to our brain and yells to our lips. We go out of our way to scare ourselves, but what if we could feel the same rush by taking a different turn on our way to work?

This is precisely what I did. By packing cookies beforehand and riding instead to the graveyard, I inched open a door to a side of myself I had not seen before. To many, this may be a trivial incident, just a wrong turn, but it was monumental. I had become so numb to the daily happenings that I had stopped thinking about myself and my place in the world. I had cemented myself as the girl on the bike.

By breaking the cycle, I felt free. I began to notice more around me, purely because it was so different. I couldn’t recite the number of trees along the block. The fields of wildflowers shone brighter, the white Queen Anne’s Lace and red fire flowers far more inviting than the tansy and goldenrod lining my street.

As exaggerated as this sounds, life had almost restarted. By simply eating my cookies with a different view of the river, I shed the baggage weighing me down; the thoughts of helplessness washed away with the sunlight sparkling over the tops of new trees.

As I sat on the mourning bench looking over the Pend Oreille River, the view of beach houses and mountains morphed into a city skyline, glittering with possibilities. I could see a life before me, outside of this tiny town; I could see the might’s, the what-if’s, the maybe’s. And all I had to do was turn right on Larch.

Ada Greve is a student at Forrest Bird Charter School and enjoys dancing and classic literature.