Use your words (before your genitals)

The Aziz Ansari sexual misconduct allegation isn’t the fault of one quiet woman or one aggressive man, but the result of a deceptive sex culture

When comedian Aziz Ansari became the latest recipient of a sexual misconduct allegation, it took me a few days before I opened the story. 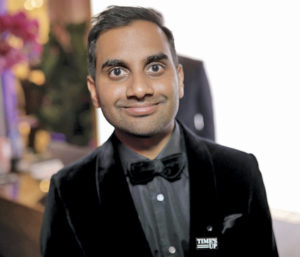 Before reading the anonymous account on the website Babe, which describes a woman’s uncomfortable date with Ansari, I expected to feel the same way I had when I read all the other allegations: sick, sad, mostly angry.

I was tired of feeling angry, so it was interesting when the article, titled “I went on a date with Aziz Ansari. It turned into the worst night of my life,” made me feel ready to speak up.

The Ansari story is not a case of sexual assault. It is a case of sex in popular culture failing all genders.

I do not intend to discredit Grace’s story (Grace is the woman’s pseudonym in the Babe article). No one has the right to invalidate her experience — it is hers alone. If it changed her life, no one can say it didn’t.

However, there is some debate as to whether what happened truly qualifies as sexual assault. Grace and Ansari went to dinner, then back to his apartment, where he made moves to engage in sexual activity. Grace said she both received and performed oral sex but that she “used verbal and nonverbal cues to indicate how uncomfortable and distressed she was.”

While the allegations against Ansari may seem unfair to some and justified to others, I’m not so concerned with that. I see this as a textbook opportunity to address a problem deeper than hookup culture and simpler than the male-female power dynamic. Rather than blaming Grace or Ansari, I choose to blame our society’s inability to talk about sex.

From my deductions, Ansari is not a bad guy. In a response to the Babe article, he said he and Grace engaged “in sexual activity, which by all indications was completely consensual” and that after he received a text the next day from Grace saying she was uncomfortable, he was “surprised and concerned.” Ansari is a vocal supporter of the #metoo and Times Up movements, which give voices to victims of sexual assault.

Grace is an average 20-something woman trying to navigate the dating world. While she “could” have done this and “should” have done that, her lack of assertiveness is not what is missing from the equation.

It’s a lack of communication.

Think about the hottest TV and movie sex scenes. Often, it all begins with intense eye contact, then a sensual kiss, the removal of clothing and finally, the dirty deed. Simple, sexy and certainly not discussed in detail. This is America. Talking about the ins and outs of sex (no pun intended) is just not the norm.

But here’s the reality: Especially in the world of casual hookups — which are initiated as a means to gain sexual pleasure, right? — people need to use their words. Female pleasure is misunderstood because it has been treated as taboo. But women aren’t the only ones who will benefit from verbalizing their needs. Men, like Ansari, could benefit from a culture that doesn’t glorify silence as consent.

Grace may not have entered the night with the assumption that sex would happen, and maybe Ansari did. We don’t know. They didn’t talk about it.

Grace felt a certain comfort level during the oral sex phase, but moving beyond that was not on her agenda that night, but she did not explicitly voice this.

That said, Ansari did not pick up on Grace’s nonverbal cues and continued pursuing her. Would things have gone differently had he asked her what she liked, what turned her on, etc.? We don’t know, because that conversation — that awkward, never televised conversation — did not happen.

At the expense of simplifying a difficult subject, it all comes down to this assumption that silence is sexy, and sex isn’t a conversation. For a truly fulfilling sexual experience — whether you’ve been with the person for 30 minutes or 30 years — enthusiastic consent ought to be a requirement.

While their date could have gone better, Ansari’s and Grace’s story is not a story of sexual assault. It is the unfortunate result of the mind-reading sex system, and that has to change.