You were probably expecting something freedom- or barbecue- related, huh? If you’ve learned anything about this article by now, it’s that I am completely oblivious to overarching themes and societal norms! 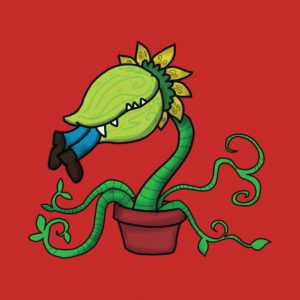 Most plants pull nutrients out of the ground with their roots. At one point or another, most of the stuff that plants eat was meat or other plants decayed over an immense period of time. Carnivorous plants cut right to the chase, saying:”Forget that, get in my belly!”

Plants like the famous Venus flytrap snap insects up in their “jaws” and digest them whole like the Sarlacc from “Return of the Jedi”. These are freakishly intelligent evolutions with shockingly simple designs. The Venus flytrap has specially adapted leaves lined with something called trigger hairs, which are exactly what they sound like. The intelligent evolution here is that prodding one trigger hair won’t snap the leaves closed, but touching more than one within a few seconds of each other will. These plants developed this way so that only something moving around could trigger them, but not things like rogue twigs or bits of pollen. That way, the plant doesn’t waste energy trying to eat things that won’t give it nutrients for growth.

Venus flytraps aren’t the only carnivorous plants in the world, nor is their method the only one for consuming the flesh of unwitting insects. Pitcher plants come in a staggering array of sizes, shapes and colors, but share a key trapping skill used by early hominid hunters: Pitfall traps. Insects would crawl or land on the top leaf of a pitcher plant, which would drop downward to send the insect into the pitcher, which is lined with mucus and digestive juices. Who needs teeth when you can melt your prey?

Some orchids have also adapted this unique ability, including my favorite: The hammer orchid, Drakaea, which tricks insects into trying to mate with its bug-shaped flower, only to body-slam them into its pitcher and coat it with pollen. Yeah, brotherrrrr!

Just when you thought it couldn’t get any weirder, bladderworts float into the picture. Bladderwort is an aquatic plant equipped with small air bladders that create a vacuum by displacing water with air from the bladder, which sucks tiny marine invertebrates in to be devoured. Bladderwort doesn’t have any roots, but some of its terrestrial relatives have been seen shooting roots into waterlogged soil that acts strictly as an anchor, keeping it from floating away somewhere away from its food source. Diabolical!

Weird as that may be, there are even weirder, far more gooey plants ready to relieve us of our arthropodic woes. Sundews are a type of plant with a sticky mucus slathered across its leaves. Insects land on the leaves and get stuck (just like on the strips of flypaper we buy at the store). Mucus glands in the leaves then start to produce digestive enzymes that will proceed to devour the insect.

Plants like these adapted to devour insects because their soil has very few nutrients, so they needed a supplement from somewhere else. How plants managed to figure that out is beyond me, but the wonders of hundreds of millions of years of evolution never ceases to amaze me. Terrestrial animals use sight and smell to understand their environment and then select mates to carry on their genetic lineage, picking mates with attractive qualities for that specific environment (like fish selecting other fish with the largest fins in an area with heavy currents). Plants don’t have vision, and they can’t hear things, yet they somehow know exactly what they need to excel in their environment.

Cells are weird. You ever wonder how many cells you leave on a doorknob every time you hit the latrine? A conversation for another day!

Because of their weirdness and their undeniable hunger for anthropoidal flesh, carnivorous plants have made a resurgence for home botanists and quirky weirdos like myself. When given the option between a pet plant that eats the flesh of the living and a non-recyclable strip of sticky flypaper that will end up in the ocean, I’ll always take the thing that I can compost later.

What about during the winter when the bugs disappear?

Lucky for us, we live in an age of worldwide globalization, where crickets or mealworms bred in Mexico can be shipped overnight to your doorstep. Don’t worry about neighborly judgment; getting a box of crickets isn’t that weird. Anyone that owns any type of reptile does it. Just don’t leave the box open, or you’ll be fishing dead crickets out from behind your toaster for months.

If you want more information on carnivorous plants, consult your local librarian or the digital catalog. It wouldn’t surprise me to find several titles on raising plants like this, and who knows? Maybe flesh-eating botany could be the new career path you never knew you wanted.