McGeachin issued the executive order while Gov. Brad Little was out of state traveling to Texas to visit the U.S. border with Mexico along with nine other governors from the West.

The Idaho Constitution states that the lieutenant governor serves as acting governor while the governor is out of state. 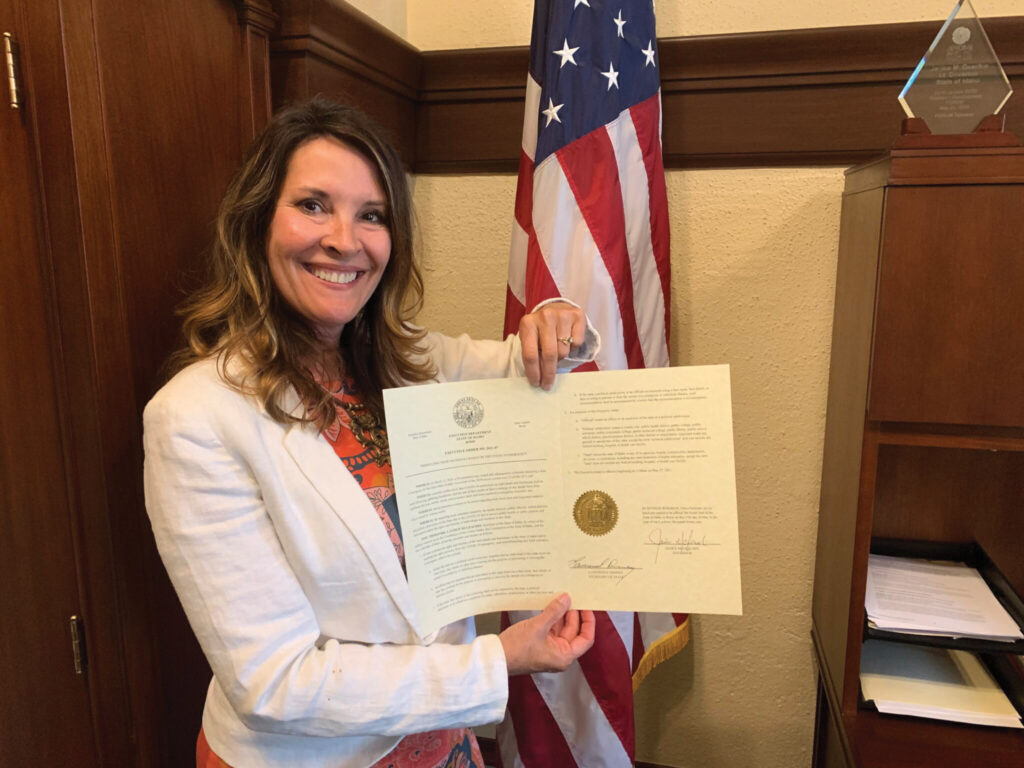 In this file photo, Idaho Lt. Gov. Janice McGeachin poses with the executive order she issued May 27 prohibiting mask mandates as acting governor while Gov. Brad Little was out of the state. (Clark Corbin/Idaho Capital Sun)

In a statement Oct. 5, Little vowed to rescind and reverse any actions McGeachin takes in his absence.

“I am in Texas performing my duties as the duly elected governor of Idaho, and I have not authorized the Lt. Governor to act on my behalf,” Little wrote in a statement released by his office to the Idaho Capital Sun. “I will be rescinding and reversing any actions taken by the Lt. Governor when I return.”

McGeachin’s executive order marks the latest clash in the battle between the two political rivals ahead of next spring’s anticipated showdown in the Republican gubernatorial primary election.

“Today as acting governor I fixed Gov. Little’s executive order on ‘vaccine passports’ to make sure that K-12 schools and universities cannot require vaccinations or require mandatory testing,” McGeachin wrote on social media. “I will continue to fight for your individual liberty.”

Little also took to social media to respond to McGeachin on Oct. 5.

“Attempting to deploy our National Guard for political grandstanding is an affront to the Idaho Constitution and insults the men and women who have dedicated their life to serving our state and the country,” Little wrote.

In May, while Little was out of state on a different trip, McGeachin issued an executive order banning mask mandates — even though the state never has had a mask mandate in place. Little responded the next day by rescinding the executive order retroactively and calling McGechin’s actions a “irresponsible, self-serving political stunt.”

In 2019, during yet a different instance where Little was out of state, McGeachin presided over a rally of the Real 3%ers of Idaho militia group and administered an oath to the group’s members.

McGeachin has already announced her candidacy for governor in 2022. Little has yet to officially announce whether he will run for re-election next year, but he has appointed a campaign treasurer and is raising campaign funds. Although he has not announced a campaign, Little reported raising $18,500 in campaign contributions on Oct. 4 alone.

McGeachin’s executive order went into effect at 2 p.m. on Oct. 5. It was not immediately clear when Little would rescind it. His office announced he would still be out of state on Oct. 6 visiting the border.

Reaction to McGeachin’s executive order was mixed among Republicans.

“While the Lt. Governor has an important role to serve as president of the Senate and follow the guidance of the Governor, her actions today are the exact kind of overreach that does not represent Idaho and Idahoans,” Speaker of the Idaho House Scott Bedke, R-Oakley, said in a written statement. “This is a complete grandstand and abuse of her political office in an attempt to influence voters.”

Rep. Tammy Nichols, R-Middleton, tweeted, “Awesome! So glad she’s standing up for the people of Idaho.”