Top legislative leaders are working on a plan to bring the Idaho Legislature back into session at the Statehouse in Boise, Speaker of the Idaho House of Representatives Scott Bedke announced Oct. 5.

The announcement, which came during a tumultuous day of politics in the Gem State, was not a surprise at this point. 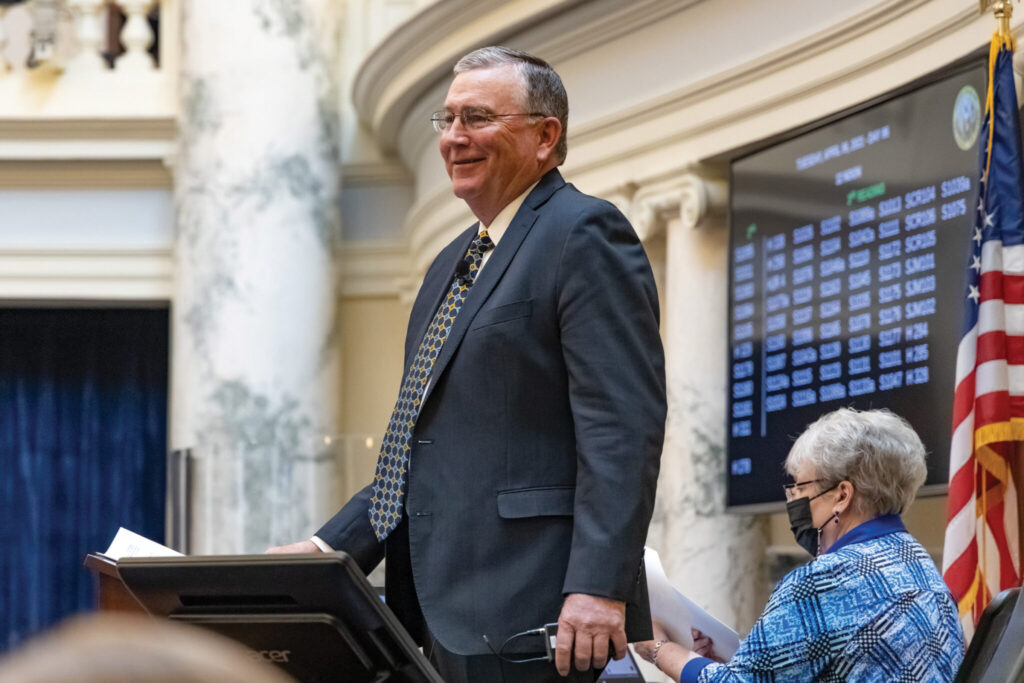 Speaker of the House Scott Bedke (R, Oakley) at the Idaho Capitol on April 6, 2021. (Otto Kitsinger for Idaho Capital Sun)

On Oct. 4, Republicans on the Legislature’s interim Committee on Federalism voted to recommend that the full Legislature consider a draft bill that would criminalize state and local government employees who implement President Joe Biden’s new COVID-19 vaccination and testing rules for employers.

“Currently, the Senate Pro Tempore [Sen. Chuck Winder, R-Boise] and I are working through the proper avenues to return to session with a clear path forward to deny the recent Biden mandates,” Bedke wrote in a press release issued Oct. 5. “The draft legislation moved forward by the Joint Federalism Committee with unanimous support of its Republican members appears to have found that path. I stand firm against the current Biden administration’s attack on personal rights and freedoms, and I do not support this federal violation.”

Sen. Steve Vick, R-Dalton Gardens, is sponsoring the draft bill and recommended the Legislature reconvene in a special session within the next 30 days to take up his legislation.

“That is a concern of mine that we don’t delay,” Vick said Oct. 4. “These mandates are going to go into effect before the Legislature meets again. I do think a special session is necessary to address this issue.”

The Legislature is not in session now. On May 12, the Idaho Senate adjourned for the year following the longest legislative session in state history. However, the Idaho House voted down a motion to adjourn and instead went on an extended, open-ended recess.

It was not immediately clear when the Legislature would return to the Statehouse.

The Joint Finance-Appropriations Committee is already scheduled to hold meetings Tuesday, Oct. 19-Thursday, Oct. 21 at the Statehouse. JFAC includes 20 of the 105 legislators, including members of both the House and the Senate.

The Idaho House may have other business when it convenes as well.

The House has yet to vote on a House Ethics and Policy Committee recommendation to censure Rep. Priscilla Giddings, R-White Bird, and remove her from a legislative committee. The Ethics Committee found Giddings committed conduct unbecoming of a legislator and detrimental to the Legislature after she posted a blog with the name and photo of a 19-year-old intern who accused former Rep. Aaron von Ehlinger, R-Lewiston, of rape.

Ada County District Court issued an arrest warrant for von Ehlinger last month and he was arrested in Georgia on Sept. 27. He has maintained he is innocent.