City planning another roundup and relocation of geese at City Beach

For the second year in a row, the city of Sandpoint is taking action to capture and relocate Canada geese from City Beach. This year, the permit through the U.S. Fish and Wildlife Service includes a roundup of about 200 mature birds and goslings, which will be transported to a piece of property owned by Fish Wildlife near the Chain Lakes, “about 90 miles away as the goose flies south,” said Sandpoint Parks and Recreation Director Kim Woodruff. 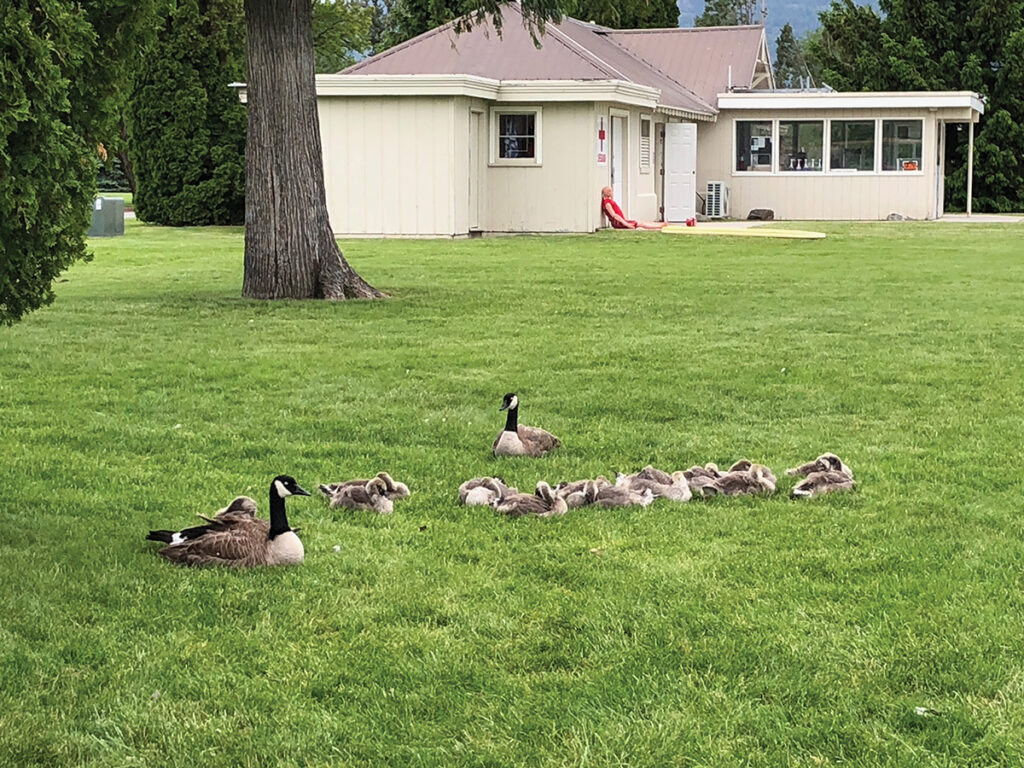 A family of Canada geese at Sandpoint City Beach. Photo by Jane Fritz.

The roundup and relocation, conducted by the U.S. Department of Agriculture in coordination with Idaho Fish and Game, may take place as early as Wednesday, June 25, but city officials said that date remains tentative.

“At this point we can’t even commit to a specific date,” said Sandpoint City Administrator Jennifer Stapleton, but added that “it will be before the end of the month.”

Unlike last year, Woodruff said the 2020 permit is “just a relocation; there is no euthanization or otherwise disposal of any animals.”

In 2019, adult geese captured at the beach were banded. If those banded geese returned, they would be euthanized.

“The permit that they issued this year authorizes only the capture and relocation of the geese,” Stapleton said. “Those that have returned, those that may have been the young ones from last year [that were not banded] and any other potential that come in, they would be relocated.”

Goose removal at City Beach in 2019 sparked — and continues to spur — controversy, with some in the community arguing it separated goslings from their parents and represented an inhumane solution with euthanization. Another argument has been that the relocation strategy simply didn’t work, as geese — many of them banded from the roundup — returned within a few months.

In a letter to Sandpoint Mayor Shelby Rognstad and Stapleton, and shared with the Reader, area writer, longtime journalist and vocal goose advocate Jane Fritz described the roundup and relocation as “a waste of money, has no reasonable future and could be remedied in other more humane ways.”

Woodruff told the Reader that while the geese did return to City Beach, they did so in dribs and drabs over the course of several months — following capture in late-June 2019, about 19 of the birds returned to the beach in the July, he said. In August about 30 returned over the month, in September the average was 25 and in October that rose to 121.

“I want to say that it was incredibly successful,” he said, adding that the relocation effort met its goal of limiting the number of birds — and their feces — at the beach during the busiest months of the year.

“We’ve been trying for years basically to pick up after the mess,” Woodruff said. “It’s really not the geese that we’re opposed to, it’s what they leave behind.”

Past efforts have included mechanical beach and grass cleaning, the deployment of decoy coyotes to scare off the birds and, since last year, so-called “hazing” of geese by a team of dogs whose owner operates under a contract with the city. Stapleton said the latter program, which relies on the dogs frightening geese off the grass and into the water, will continue in the summer and fall pending a contract that is in the process of being finalized.

Bringing even more dogs to City Beach is also under consideration by the city. An online survey at opentownhall.com/portals/287/Issue_9060 asks participants to weigh in on whether they think it’s a good idea to alter the city’s ordinance to allow dogs in various parks, including on-leash at the beach “to help deter geese and minimize their impact.” The survey will remain open until 11:59 p.m. on Tuesday, June 30. As of June 17, the survey had drawn nearly 400 responses — “It’s our most popular survey to date,” Stapleton said.

As for whether a slackened dog policy at the beach could help lessen the number of geese at the park, Stapleton said “it may.”

“I have frequently gotten questions and requests for the city to loosen its policy on dogs. On the other side, we’ve also had people who feel strongly that the policy should be just as tight and even tighter,” she said. “While they may be a deterrent to the geese down there, they can also be a threat to the geese down there. Do we have a killing or a maiming of a goose? … Dogs are dogs.”