Since the last of the snow melted, I have been scattering small piles of birdseed around the lawn, trying to lure songbirds to a newly established birdfeeder. Every now and then, a quartet of mule deer stroll through and nibble bits of corn from the piles of seed. So sweet and fuzzy, I thought. I felt like Snow White, a friend of all the forest creatures.

Then I planted a beautiful tulip, its blossoms a delicate purple that stood out as a beacon of spring. The next morning, it was chomped to the ground, bulbs scattered haphazardly, a tender treat for the mangy, dastardly creatures that dared to step foot in my garden. Sound the alarm, I cried. Dispatch the sentries. The villains will surely be back to wreak havoc again. 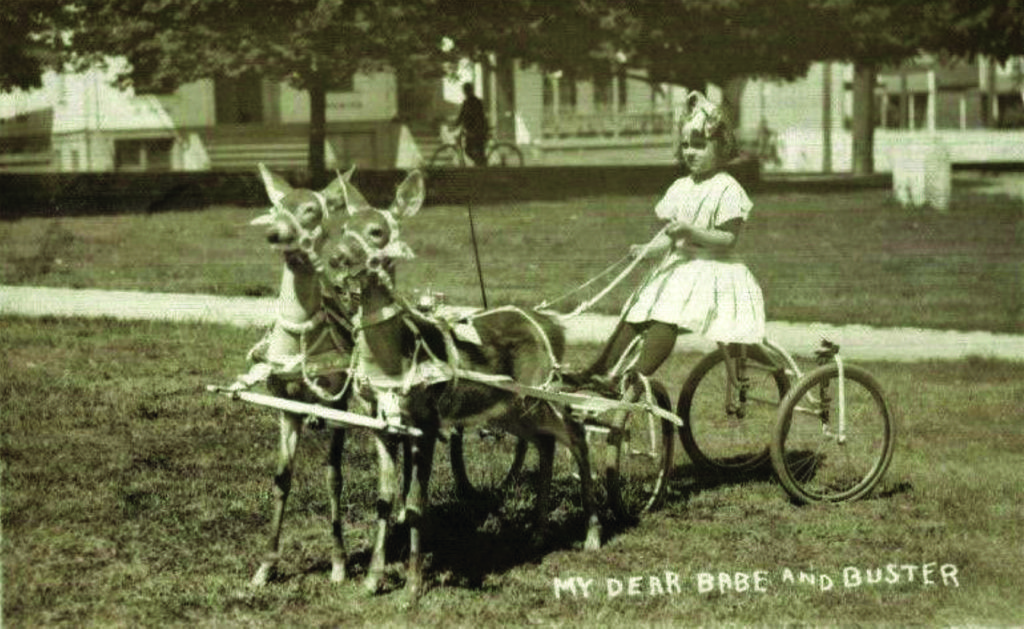 A young girl riding a custom buggy pulled by “Babe and Buster.” Courtesy of Bonner County Historical Society and Museum.

Throughout our history, we have had a tendency to dramatize animals, whether by reading fiendish motivations into hungry deer or putting costumes on our dogs. If you think that our obsession with humanizing and befriending animals is a new phenomenon born of technology-aided boredom, think again. In the early days of Bonner County, our ancestors maintained quite the menagerie of wild animals.

Frank Clements was known far and wide for his two pet deer, Babe and Buster. They were a regular sight around Sandpoint, pulling a custom-made buggy. Clements entered the dynamic pair into exhibitions around the Northwest, and as Bonner County Historical Society historian Dan Evans says, “Boy, could this guy tell stories.”

Buster and Babe allegedly could read, walk a tightrope and enjoyed listening to ragtime music. Clements once told a newspaper that he refused an offer from a circus manager of $50,000 for Babe and Buster, “the equivalent of $1.3 million today,” said Evans. In 1915, Clements set out with Buster and Babe on a world-record expedition from San Francisco to New York. It appears that they made it at least as far as Chicago, where Frank eventually settled and began training reindeer.

Equal to Clements as a master of drama — both in her cinematic work and real life — Nell Shipman kept several pet bears at Lionhead Lodge at the north end of Priest Lake, which she used in some of her film projects. The most famous bear-keeper of all, however, was Ms. Mary Matilda (Timblin) Hunt, who owned the Great Northern Hotel in Sandpoint.

One August day in 1910, when a Sandpoint Interurban Railway street car stopped and sat unattended on the tracks, one of Hunt’s pet bears broke out of its enclosure, climbed aboard the street car and ate more than six pounds of butter destined for local deliveries. When motorman Dick Turpin returned from an errand, he “was thunderstruck at the audacity of the bruin, but lost no time in hastening to the car and assisting the bear out one of the side doors,” according to the local paper. 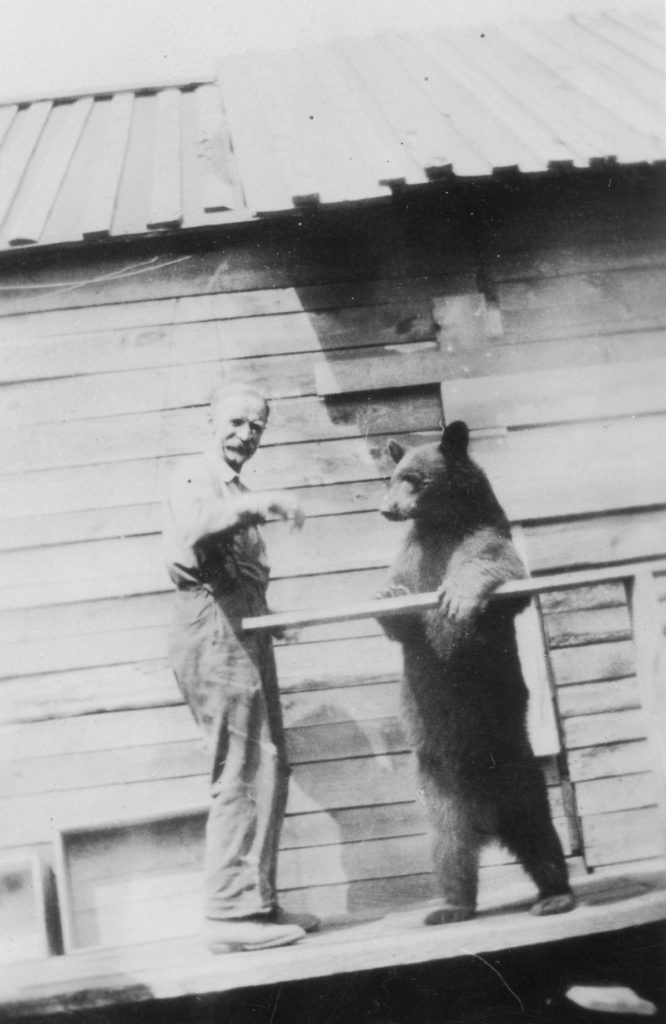 An unidentified man posing outside a cabin with his pet bear. Photo courtesy Bonner County Historical Society and Museum.

Local wild animal adventures may have become smaller in scale over the years, but they still abounded. In 1984, as a prank retirement gift, Idaho Fish and Game transplanted 28 eastern fox squirrels from Boise to former IFG commissioner Pete Thompson’s home in the Selle Valley. Seven years later, the non-native species had spread far and wide, thanks to few natural predators. Though Thompson defended the squirrels, saying “I can’t see they do any damage,” opinions differed, particularly among people whose gardens were munched on by the rodents. Today, the “town squirrels” have traveled at least as far as Sagle, though no one knows how they hitched a ride across the Long Bridge.

As entertaining as these stories may be, it is our responsibility to enjoy them as relics of the past and not add to the canon of questionable wildlife interactions. We have established healthier boundaries with wild animals in recent years, thanks to ever-evolving research about animals’ natural habits and habitats. We know how quickly non-native species introduction can disrupt an ecosystem. We’ve learned that we shouldn’t harness deer to our golf carts and fat bikes.

As black bears come out of hibernation, we’ll keep our garbage cans inside, so they forage for carrion instead of carry-out. We’ll remember that the neighborhood moose is a powerful and unpredictable creature and — for that matter — so are a lot of our dogs, even the ones wearing costumes.

I’ll stop channeling Snow White, in the hopes that the muleys will head back to high ground for the summer, instead of plaguing me with their tulip-devouring mischief, or as they might say, natural habits.